Starting with games played at Allianz, we highlight our best of the bunch, be it a record breaking game, a historic day for the club or just a great win in general.

The day the Sky Blues kicked off their time in the Hyundai A-League, playing Melbourne Victory in front of a 25,000 strong home crowd, marquee Dwight Yorke proved his worth with a first league goal before Archie Thompson struck in the second half to ensure the points were shared. 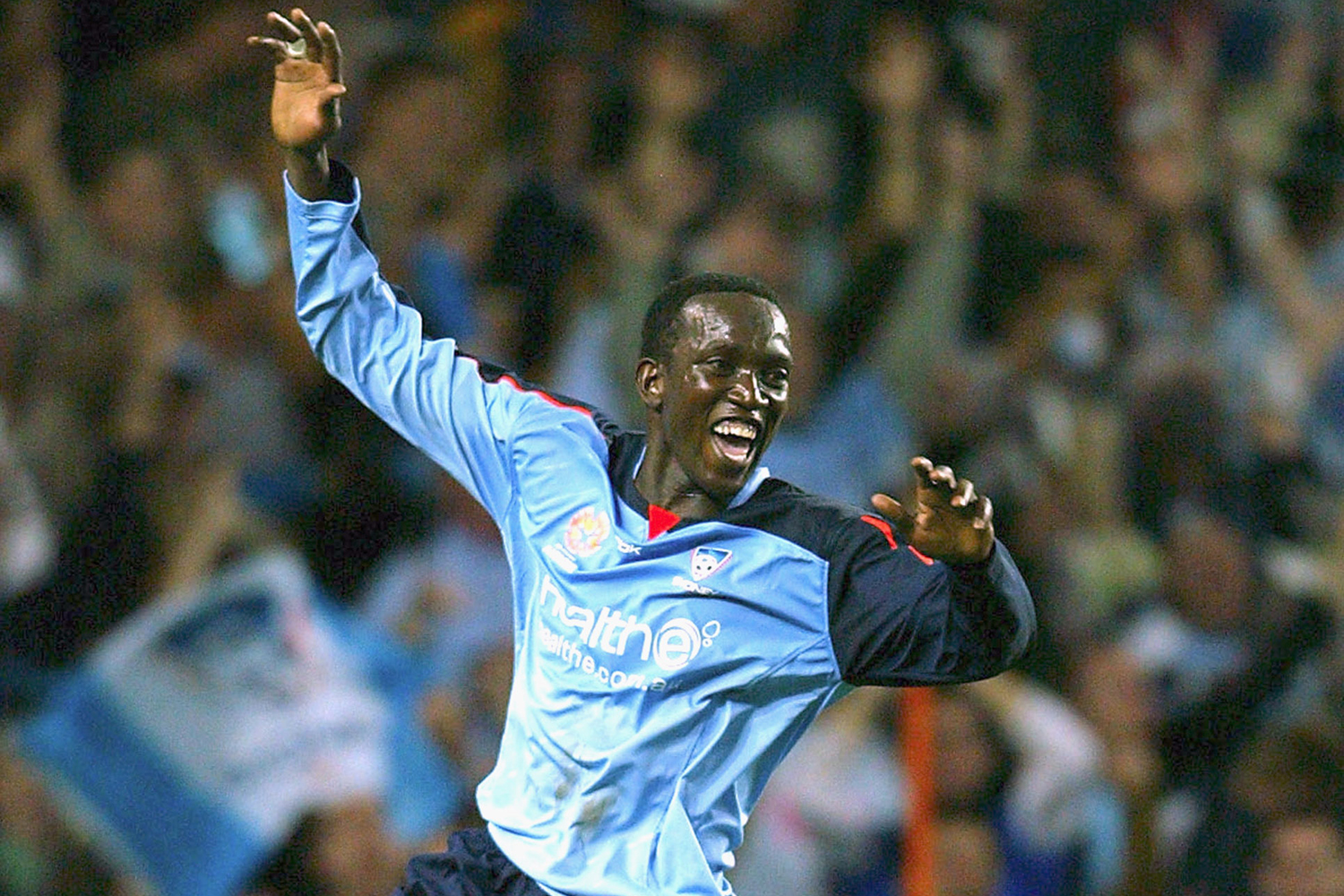 After progressing through a tight Major Semi-Final against Adelaide United, the Sky Blues sealed their first domestic Championship in a tense showpiece event in front of over 40,000 fans. New Sky Blues Head Coach Steve Corica popped up in the second half to score the winner in front of The Cove and send the home fans into raptures. 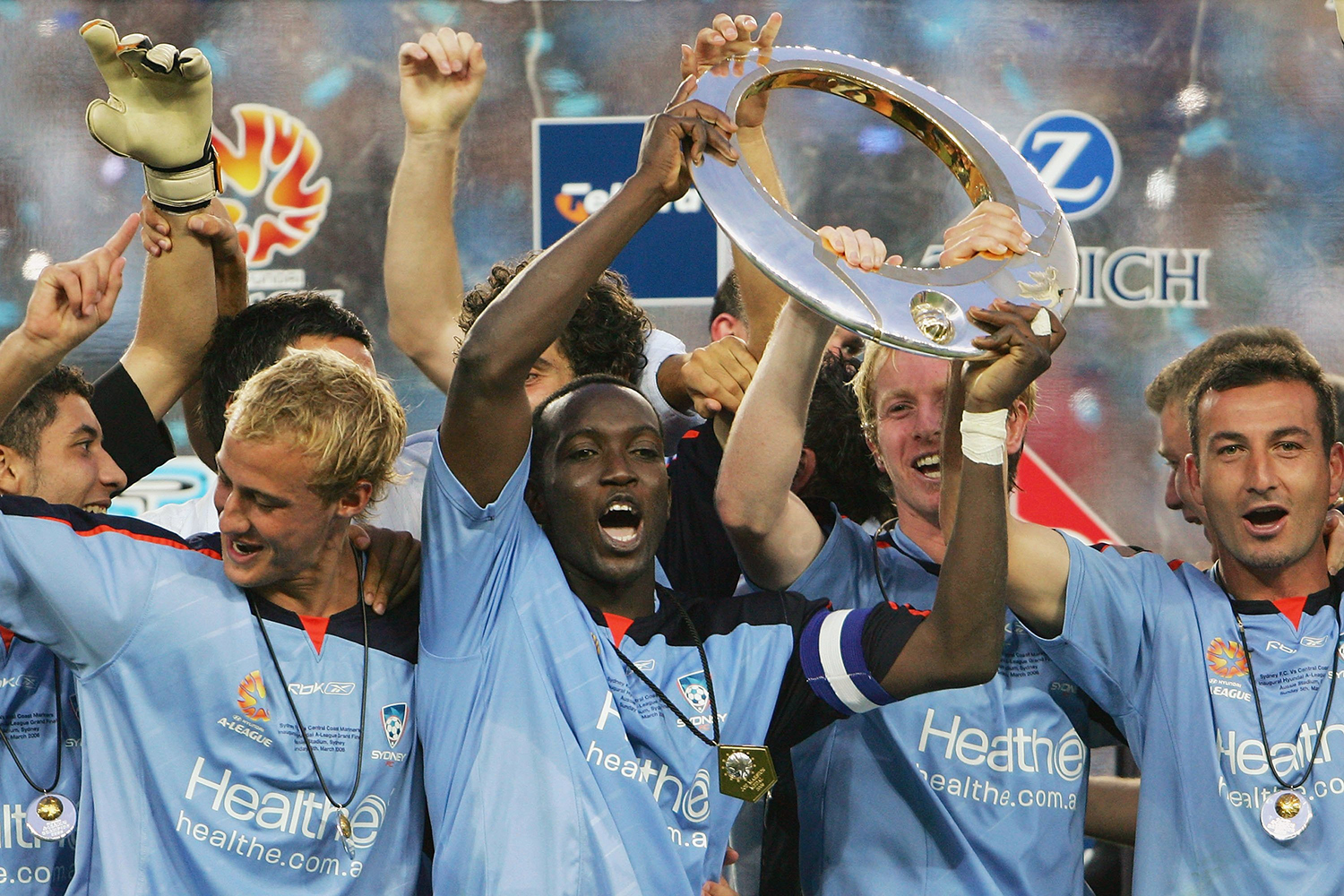 Entering the Round 27 clash against Melbourne in second place, the Sky Blues needed a win to claim their first ever Hyundai A-League Premiership. In front of another heaving crowd, Slovakian Karol Kisel got the Sky Blues off to the perfect start with a volley from outside the area, before John Aloisi sealed the win, and silverware, with a rocket of a shot in the second half. 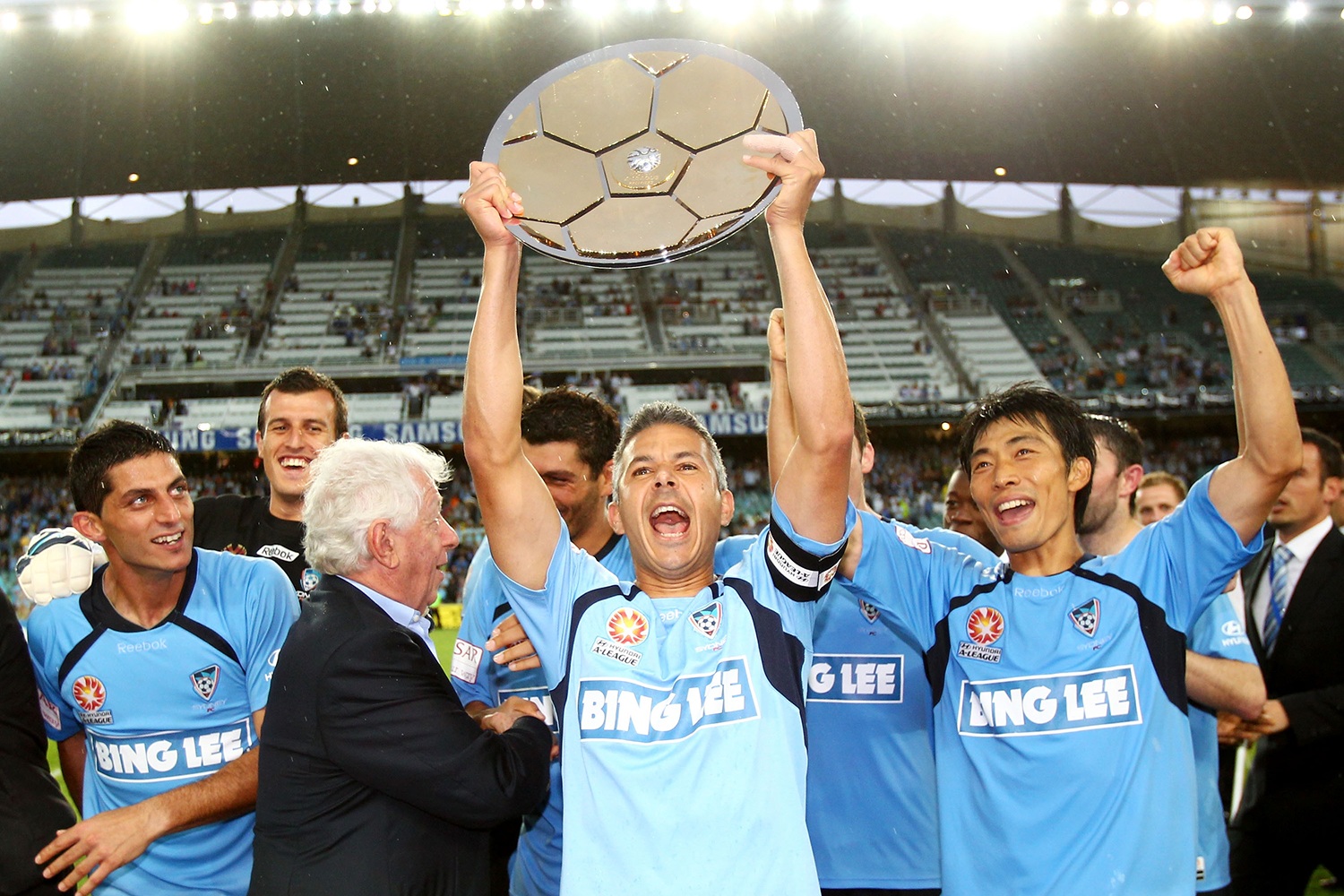 The most goals scored in a single game for the Sky Blues, and four of those were scored by marquee Alessandro Del Piero. In a scintillating display, the Italian showcased all his class to notch a hattrick before half time, capping off his stellar performance with a well-worked fourth with 20 minutes remaining. 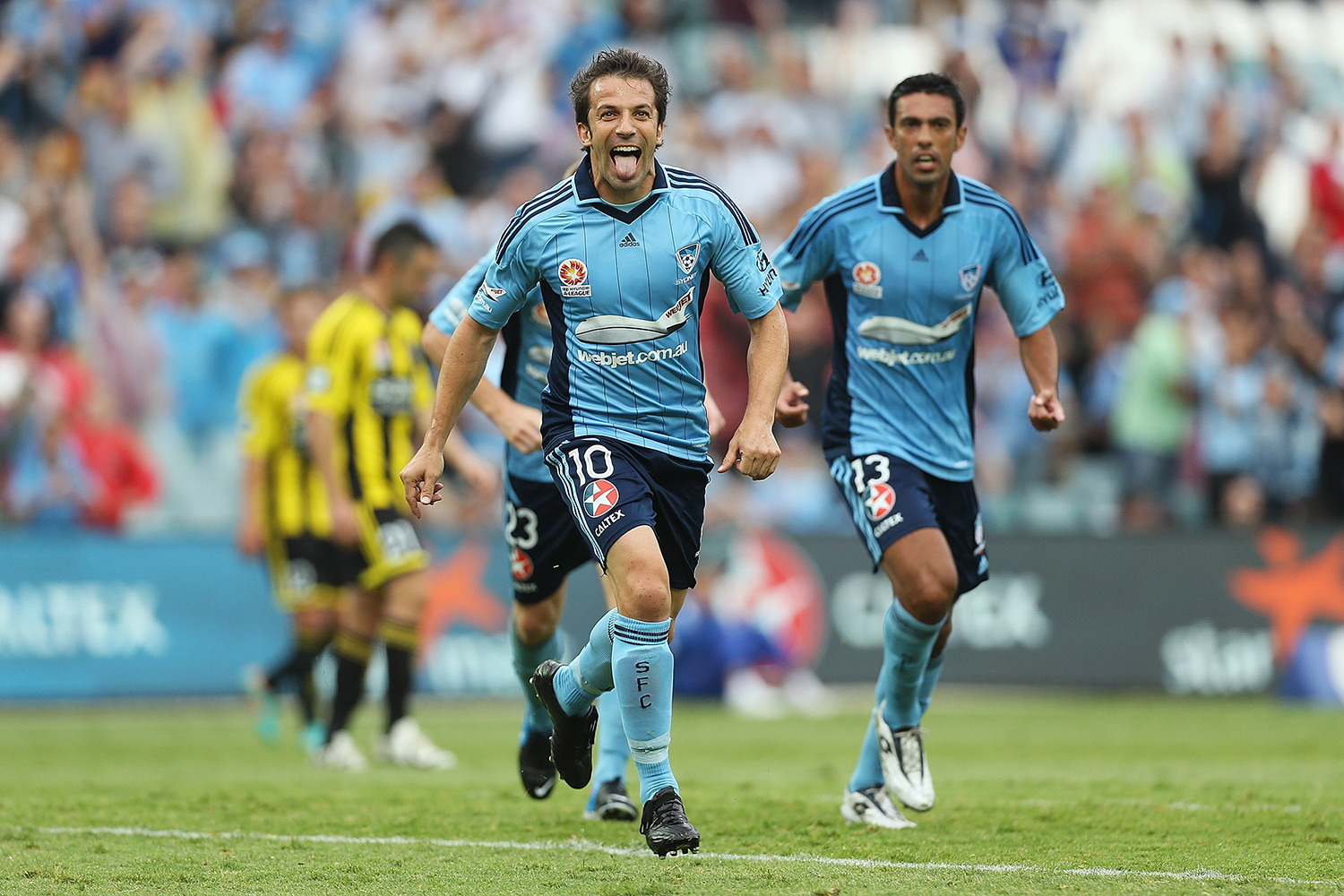 Coming back from a goal down, the Sky Blues claimed their first derby win at home courtesy of goals to Matt Jurman, Sasa Ognenovski and an Ali Abbas penalty in stoppage time. The win would spark a nine match undefeated streak against Sydney FC’s cross-town rivals, with six wins and three draws leaving the city Sky Blue. 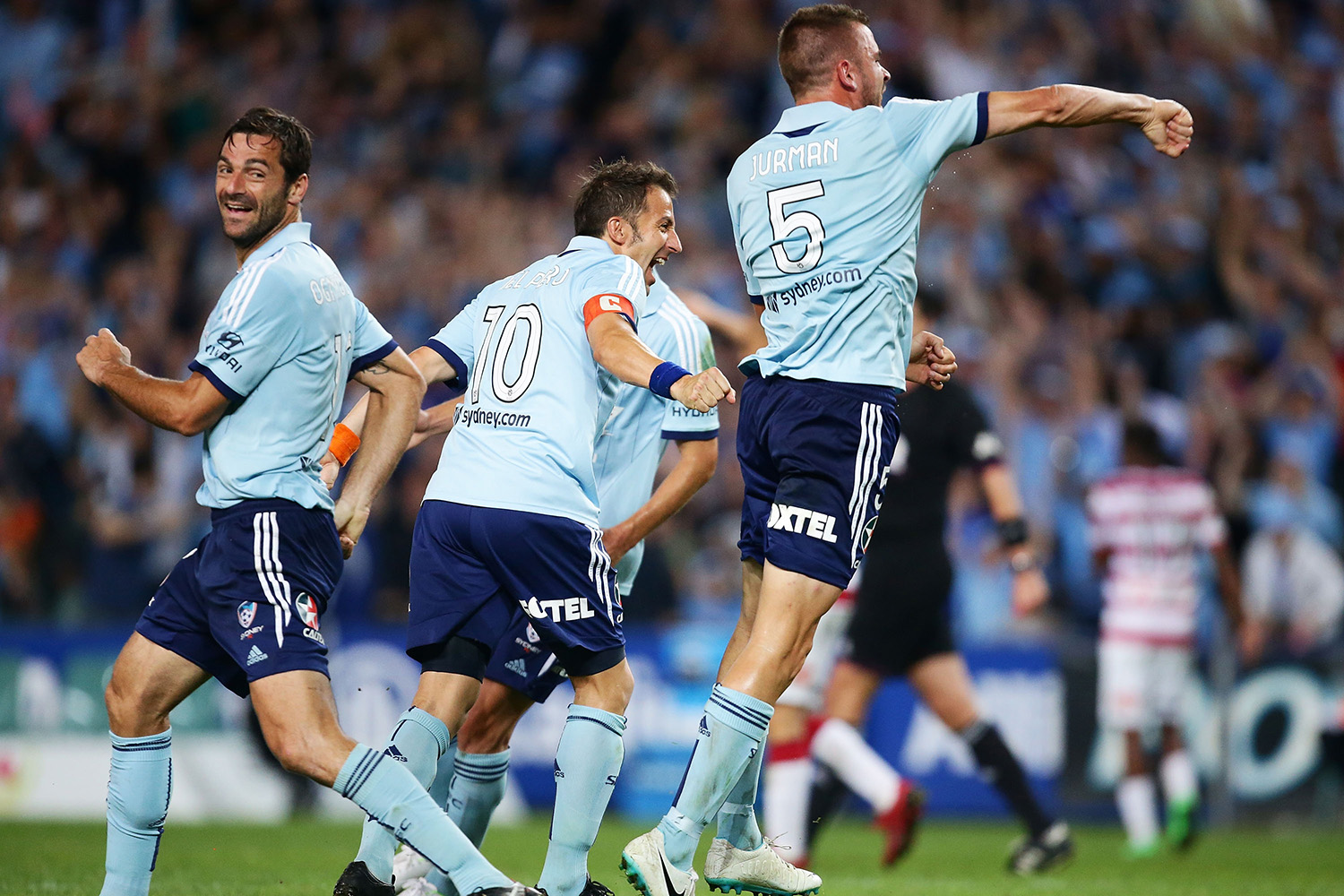 In a match that had everything, Sydney FC prevailed in the rain at Allianz Stadium to move into second place on the ladder, with marquee Marc Janko dominating the headlines. The big Austrian became the first player in Hyundai A-League history to score in seven consecutive games, while also eclipsing Alessandro Del Piero’s scoring record of 14 goals in a season. 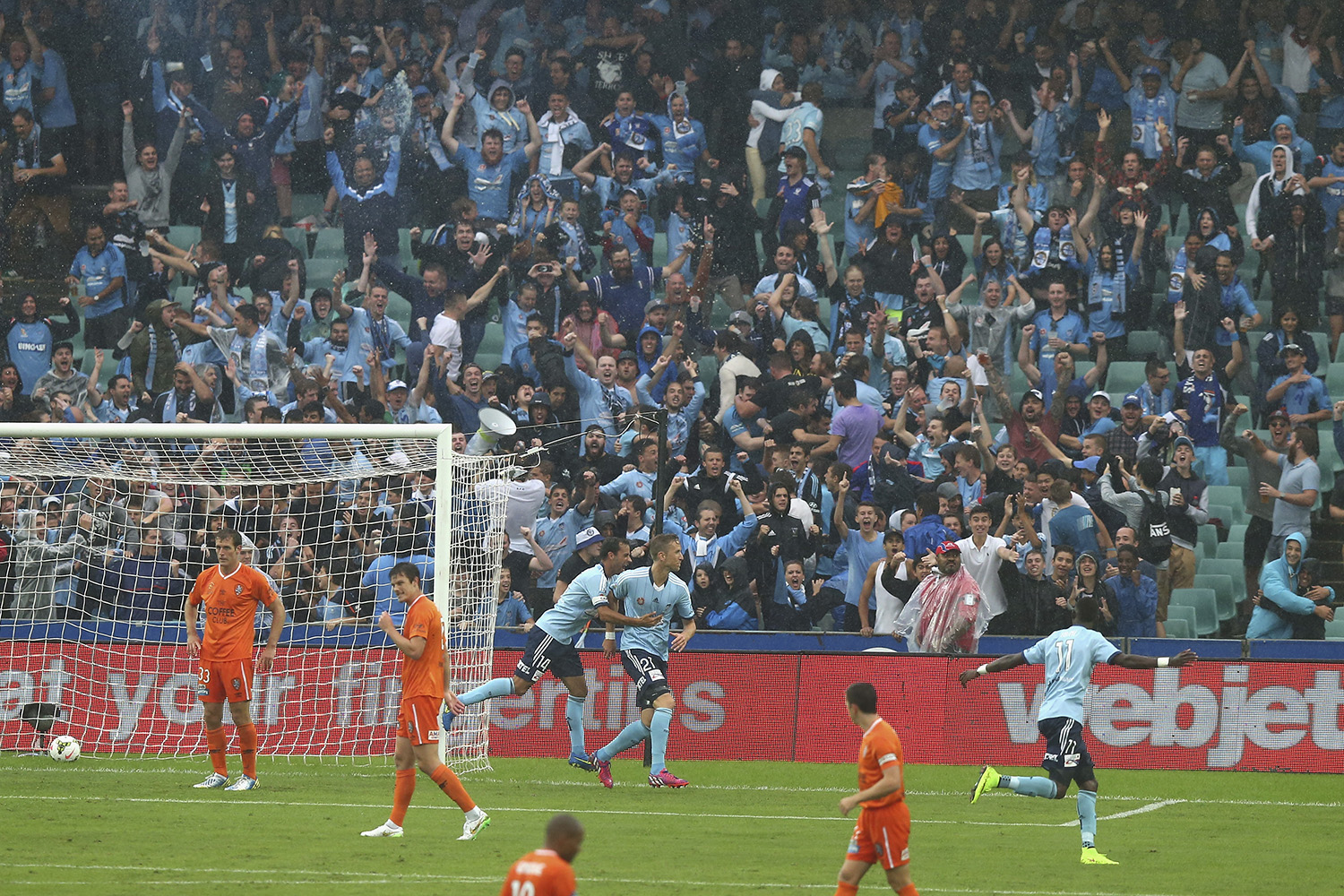 Welcoming Chinese powerhouse, and defending AFC Champions League winners, Guangzhou Evergrande to Allianz Stadium, the Sky Blues put in an incredible performance against the multi-million dollar club to seal a 2-1 win in front of 18,000 fans on a Wednesday night. Robert Stambolziev opened the scoring for the home side before Milos Dimitrijevic sealed the win with two minutes remaining. 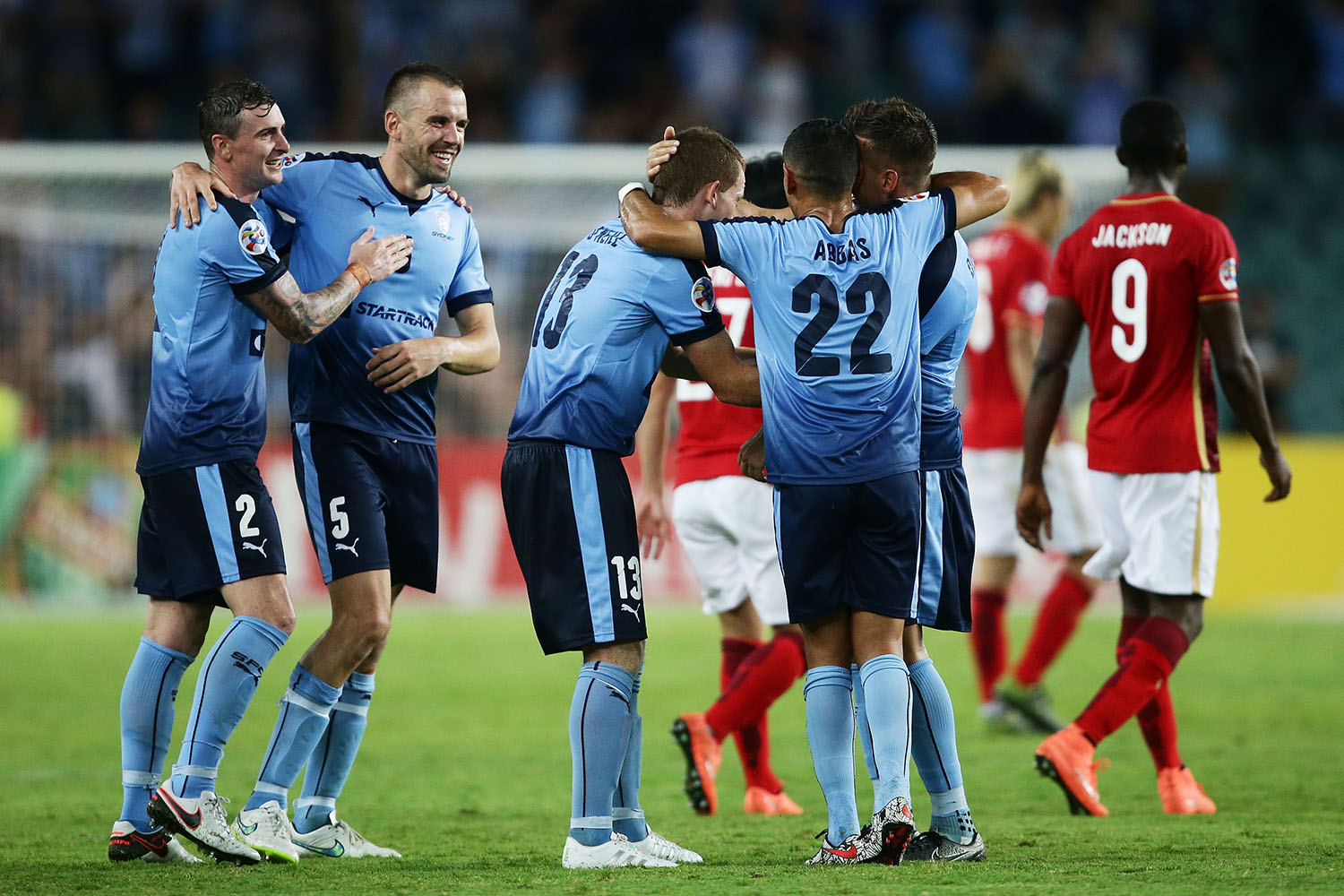 Following a record breaking season as the Sky Blues swept all before them, Graham Arnold’s men cemented their status as the best team in Australian football history with a thrilling Grand Final win on penalties over Melbourne Victory. Rhyan Grant levelled the scores at 1-1 in the second half before it went to spot kicks where Danny Vukovic came up big to deny Marco Rojas, paving the way for Milos Ninkovic to stroke home the winner. 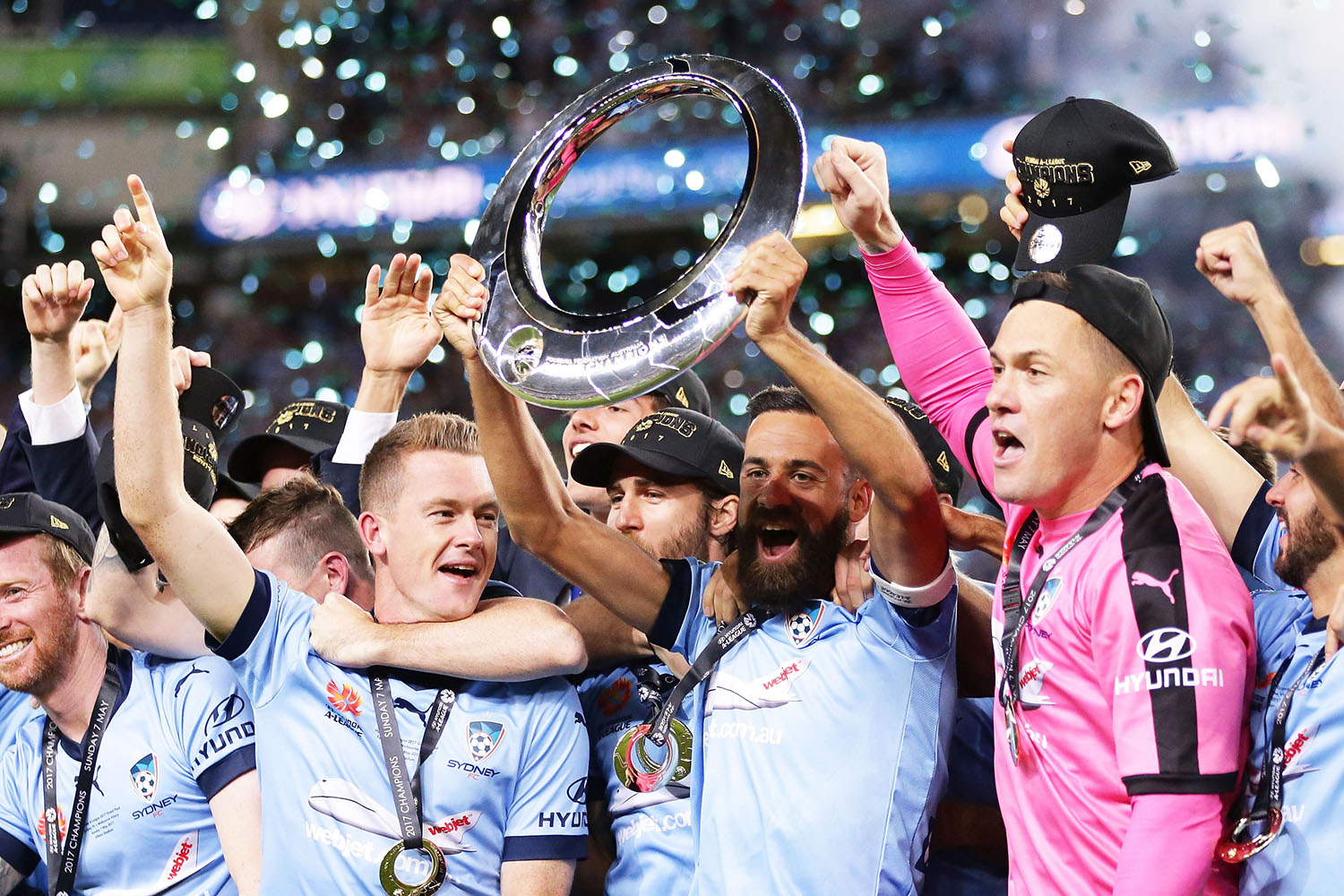 The day the Sky Blues completed their calendar year treble, adding the FFA Cup to their Premiership and Championship claimed earlier in the year. In a tense final the Sky Blues prevailed after extra time, with eventual Player of the Year Bobô heading home the decisive goal in the second period of extra time. 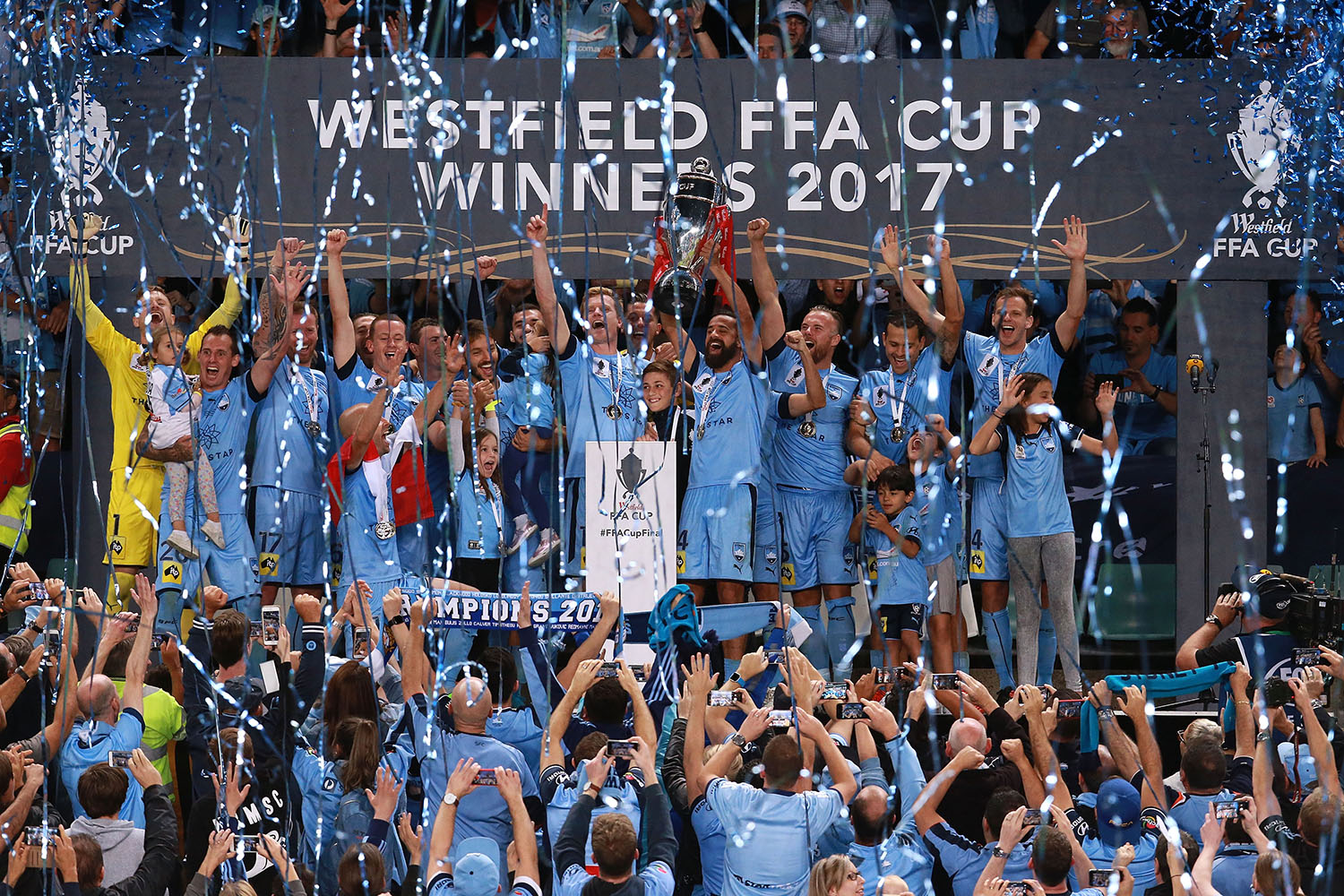 The Sky Blues set a new league record for consecutive home league games without defeat, comfortably defeating their cross-town rivals in the process. Adrian Mierzejewski scored the pick of the goals with an inch perfect free kick as the torrential rain did little to dampen the Sky Blues’ celebrations at full time. 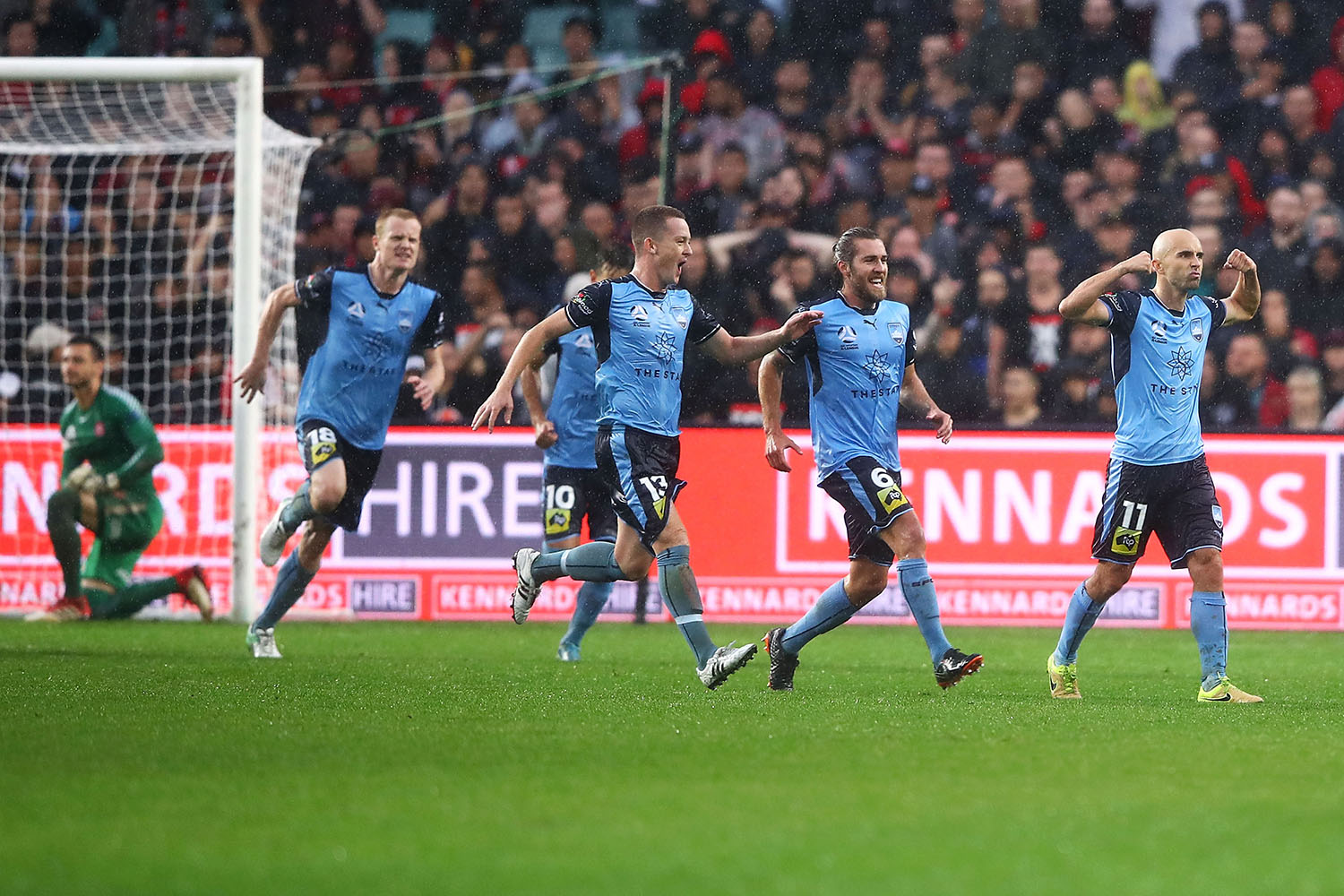