Suffering from the same disease that affected Brandon at an early age, Perthes Disease, Joshua Aidyn and Dominic met the Sydney FC Hyundai A-League squad, toured the facilities and watched the Sky Blues go through their paces in pre-season.

Aidyn Zecevic said he thoroughly enjoyed the afternoon meeting the squad and touring the training ground.

“I was very excited to meet a real soccer player,” he said,

“It was really cool how he [Brandon] showed us all around, especially the gym.

“It was awesome to watch training because they did some stuff that I used to do when I trained.

“Brandon is so good you can’t tell he had Perthes. He was a really nice person to meet up with us.” 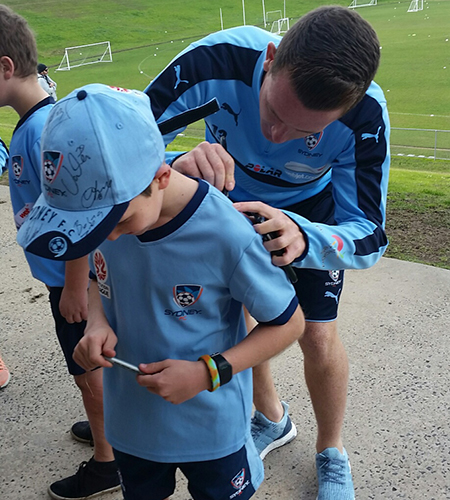 Joshua’s mother Karmen thanked Brandon for his time and efforts with Joshua.

“The hardest times for him have been soccer season, seeing his friends play soccer breaks his heart.  When he found out about Brandon O’Neill’s history it brought that little spark back into his face.  After meeting Brandon and spending time with the players from Sydney FC he now talks about when he plays soccer again, not “if”,” she said.

“I also appreciated that Brandon spoke to the boys as a ‘big brother’ figure, reminding them to listen to their parents, and follow the doctor’s advice.” 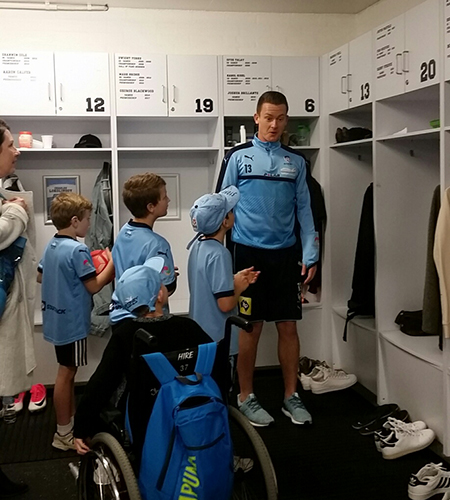 Brandon and Joshua had met earlier in the season after Joshua won a competition through their local radio station, with a limo to the Brisbane match, stadium tour, seating in the players enclosure and the chance to watch the team warm up on the sideline.

As Brandon walked into the Stadium, Joshua was introduced to the Sky Blues’ midfielder.  They had a quick chat about their shared experienced with Perthes disease and a photo.

While Josh was sitting in the player’s enclosure, Danny Vukovic gave him his gloves as he walked back from the warm up in what Josh described as a fabulous time getting up close to his idols.