Sydney FC Westfield W-League shotstopper Sham Khamis has credited the belief shown in her from Head Coach Dan Barrett and his staff for producing her outstanding performances to date.

Thrust into the number one role for the first time, Khamis has produced a number of thrilling stops to keep the Sky Blues in the top half of the table at the halfway point of the season.

“All these years I’ve struggled to believe in myself,” Khamis said.

“But now Dan has had that faith in me and I’m starting to believe in myself that I can actually do the job.

“It’s good to finally get the opportunity and I want to prove it to myself and Dan as well that it’s the right decision.

“The support from the girls is second to none and having [Goalkeeping Coach] Brody [Crane] encouraging me and pushing me to work every training session has also helped.

“The belief from him [Crane] that I can do the job, he wants me to start believing in that as well.

“We’ve been working on a lot of high balls being dominant in the air is very important in this league, and just working on the small percentages in each area of my game which will help it come a long way.

“It’s been great, this start to the season. When I enjoy my football I play a lot better and having that strong defence up front, it’s been a good start so far.” 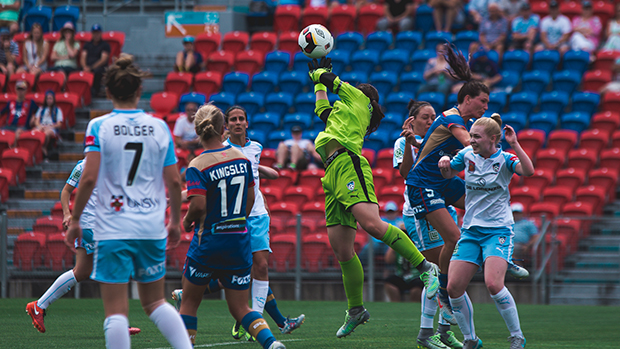 The Sky Blues return to Westfield W-League action on Friday 23 December at home against Brisbane Roar at Lambert Park, Leichhardt, and Khamis is out to prove the worth of New South Wales in the state of origin encounter.

“They always come out firing so we’ve got a gameplan and we’re out to prove to them that New South Wales has the better team.

“Last week’s BYE came at the perfect time,” she continued.

“There was a couple of girls struggling with niggles and I think that week off has helped us recover, freshen up physically and mentally and we’re excited to come out on Friday.”

Sydney FC take on Brisbane Roar at Lambert Park, Leichhardt on Friday 23 December (kick off 7:30pm). Get your tickets at the gate or follow @SydneyFC on Twitter for updates.