In a season of history for the Sky Blues, midfielder Milos Ninkovic has stood out from the pack to claim the Fox Sports Alex Tobin Medal for player of the year.

Voted by Fox Sports’ team of experts, Ninkovic has claimed the award with two rounds remaining after moving seven points clear of Perth Glory’s Diego Castro following the Serbian’s exertions at the weekend against Melbourne City.

The Sky Blues mercurial midfielder said the award was a huge honour, and it was made all the bigger as a result of the season the whole squad has had.

“It’s a big award for me, especially to win 10 or 11 times man of the match this season in a team that’s made history, in a team with unbelievable players,” Ninkovic said.

“All the team has had an unbelievable season and that’s why it’s such a huge award for me.

“I enjoy playing for Sydney FC. Last season maybe we had some bad results but I really enjoy this season, I really enjoy every game and training session,” he continued.

“We need to say that the coaching staff did a very good job in preseason because they signed some unbelievable players and that’s why we’ve made history and played so good this year.”

Ninkovic credited his team mates for playing a part in the award as the Serbian set his sights on claiming the Hyundai A-League Grand Final, following their Premiers Plate triumph last week.

“I think I won this award because of my teammates because they are unbelievable, we play together, we fight for each other and that’s why we make history,” he said.

“Before the season I had no goal to be the best player in the league, I just had one goal to win the title with my teammates and that’s it.

“Now [that we’ve won the Premiers Plate] we want to keep winning every game and keep the confidence high and be ready for the Semi Final and Final.” 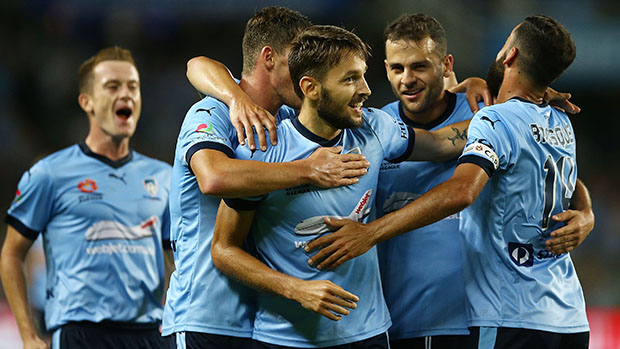 Sydney FC travel to face Wellington Phoenix in Round 26 of the Hyundai A-League on Saturday 8 April (kick off 5:35 AEST). Catch the match live on Fox Sports or follow @SydneyFC on Twitter for updates.