Sydney FC midfielder Milos Ninkovic says he will play in the Sky Blues Hyundai A-League semi-final despite picking up a knock against the Newcastle Jets on Saturday.

On the end of a nasty challenge late in the second half, Ninkovic was immediately substituted and sought treatment, however the Serbian has allayed fears he’ll be absent from Sydney FC’s Finals fixtures and is confident of a Sky Blues win.

“My ankle is good but it is still a little bit sore,” he said.

“Everyday it’s getting better and better, we have a very good medical team and I will be ready for the semi final.

“I expect to play but we have a very good team, very good players and confidence is high, so it doesn’t matter who will play, we are the best team in the country and that’s it.

“Grand Final I will play without a leg if I need to play,” he continued.

“These next two days it’s important to keep ice and [Physiotherapist] Elias [Boukarim] will do everything with treatment and I already feel better than yesterday.” 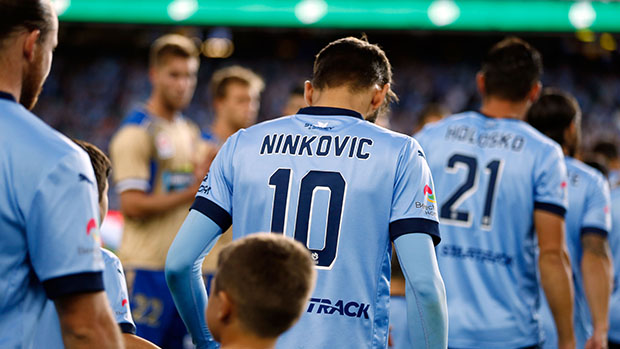 Ninkovic said he was disappointed to miss out on the Premiers Plate celebrations post match, but said it was an amazing achievement to take out the title in record breaking style in season 2016/17.

“I felt very bad [initially], I had pain in my ankle and straight after the game I couldn’t walk because of my ankle, but the next day it was much better,” he said.

“I was very angry because I couldn’t celebrate with my team mates. I was also angry because it was not a good tackle, 75 minutes and in our half, but this is football and you never know what can happen.

“It was a very good feeling winning the Premiership,” he continued.

“Before the season no one expected us to make history to win 66 points from a possible 81.

“It’s very huge and it’s a very big result for us but still we have two more important games and we want to win every game.”

Details for Sydney FC’s Hyundai A-League semi final will be confirmed following the conclusion of the elimination finals this weekend. Stay tuned to sydneyfc.com to stay up to date.