Sydney FC have retained the services of industrious frontman Matt Simon for a further season, the club confirmed today.

The towering centre forward will remain a Sky Blue for his third season, following his lifting of the Hyundai A-League Premiership and Championship in season 2016/17.

Simon’s efforts, especially in his title winning year have cemented his status as a fan favourite among the Sky Blues faithful.

The Sydney born striker said he was looking forward to extending his stay with the reigning Premiers and Champions.

“Sydney FC feels like home to me, I’m proud to play for this club and I’m proud to continue to do so as reigning Premiers and Champions,” Simon said.

“It’s fantastic to be able to keep the family together as we’re doing, we’re out to create more history next season and I can’t wait to get started.

“I’m eager to contest the AFC Champions League again next year with this group of players and can’t wait to defend our title.” 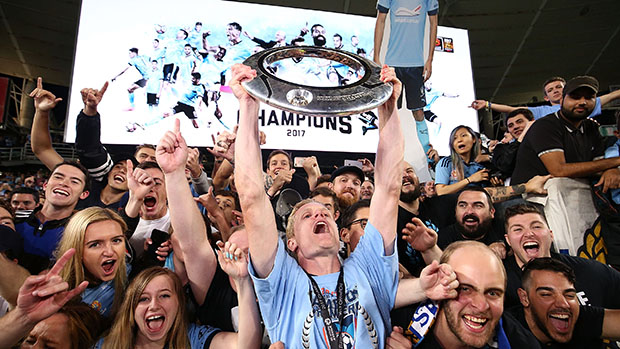 Head Coach Graham Arnold praised Simon for his work ethic and drive, as he said the striker was an integral part of the squad.

“Matty has proven time and again how valuable he is to this team and it’s fantastic to have him remain a Sky Blue for next season,” Arnold said.

“His effort and determination can’t be questioned and whenever he plays he has an impact.

“The fans love him, he loves the club and it’s only fitting we reward his efforts this season.”

Simon will be a part of the squad to face English Premier League heavyweights Liverpool FC at ANZ Stadium on Wednesday 24 May before departing for holidays and returning with the squad in July for pre-season training.