New Sydney FC defender Paulo Retre has praised the mateship within the Sky Blues squad as a key factor to success ahead of Tuesday night’s Westfield FFA Cup Round of 16 encounter (kick off 7:30pm).

Recently moving from Melbourne City, Retre noted the togetherness of the Sky Blues squad as a determining factor in his switch as he turned his attention to the FFA Cup, eyeing another impressive performance following their resounding Round of 32 victory against Darwin Rovers.

“Everything has been very professional with both clubs, but at the moment I feel like the group here feels really close together,” Retre said.

“I think that’s a strong point for when the club has been so successful over the past couple of years.

“That mateship and brotherhood factor makes a big difference and we have that in abundance at Sydney FC. It’s really exciting to be a part of it and hopefully that continues all throughout the season.

“The scoreline [in the Round of 32] made it sound like it was an easier game than it was against Darwin, it was still a difficult game,” he continued.

“You have to show up with the right attitude and we’re going to take that same approach going into the Bankstown game. Hopefully we put on a good performance.

“You have to treat everyone the same and we’ll be doing that tomorrow regardless of whether they’re an NPL 2 team or not.” 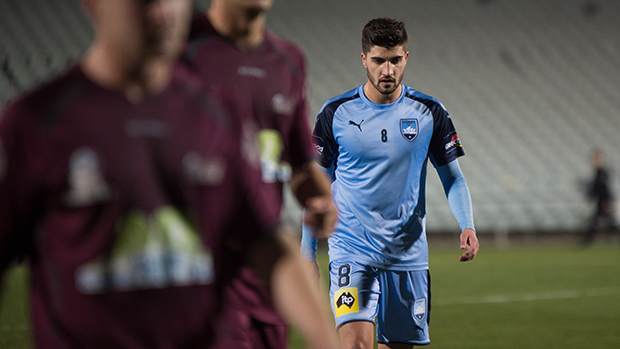 Retre said he’d settled in well to life at the Sky Blues as he expressed his shock and Head Coach Graham Arnold’s faith in slotting him straight into the starting lineup.

“I’m finding things really good, all the boys have been very welcoming, the coaching staff too, so it’s been a very easy transition for me and I’m looking forward to more games,” Retre said.

“I wasn’t really expecting to go straight into the starting line up to be honest.

“I can still do better [than my performances so far], I’m just looking forward to the FFA Cup game now and hopefully we can get the win and progress in the cup.

“I’m just looking to do my best for the team,” he continued.

“Ultimately everyone who joins Sydney FC wants to win things and that’s what I want to do, I want to be a part of a club and team who want to win things.”