Lokolingoy: From Kinshasa to Champion

Ten years ago, Charles Lokolingoy was playing football for his school in the Democratic Republic of Congo, and on Saturday he cemented his name into Sydney FC folklore.

The powerful striker scored his 23rd goal of the season in Sydney FC’s PlayStation 4 NPL 2 NSW Men’s 1-0 win over Marconi Stallions, and in doing so secured the Sky Blues’ maiden NPL 2 Club Championship.

The 19-year old has made Australia his home since the move, earning selection for the Young Socceroos and recently debuting for Sydney FC’s first grade team in the Westfield FFA Cup victory over Wollongong Wolves, achieving what the young striker set out to do a decade earlier.

“I moved to Australia from the DR Congo when I was eleven,” said Lokolingoy.

“Back in Congo, I was playing for my school but there aren’t clubs and academies like we have here.

“So coming here [to Australia], I was with Sutherland Sharks at first but I was in the train-on squad with Sydney FC and my goal was to get into the Club.

“It’s really great to be here and I want to keep pushing on.” 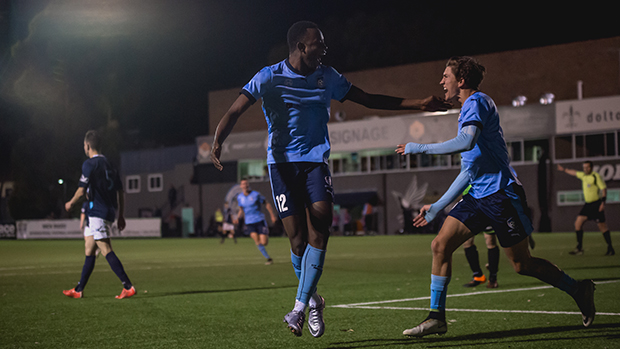 Robbie Stanton’s team had a number of chances against the former NPL 1 outfit, which boasts the likes of former Hyundai A-League players Sean Rooney and Marko Jesic, at Lambert Park on Saturday night.

Lokolingoy believes nerves played a large role in the boys’ start to the game.

“We missed chances we usually wouldn’t because we were just really nervous.

“But when I got that goal it was such a relief, we knew we could do it.”

Lokolingoy praised Stanton for instilling belief and drive into the team during the game and throughout the season.

“We already knew our roles going into the game so we were ready and knew what to do,” he continued.

“[Stanton] told us we needed to score first because if Marconi got the first goal, it’d be really hard for us.

“We knew it was going to be a difficult season overall, but Robbie [Stanton] prepared us well and made us the best we could be.”

Sydney FC’s NPL 2 Men’s team is on the verge of clinching the Premiership thanks to Lokolingoy’s prolific season.

The Sky Blues sit three points ahead of second-placed Western Sydney Wanderers FC and have a superior goal difference of 10.

But, according to Lokolingoy, this is not a time to be complacent.

“The lads have given me great support from the wings and I couldn’t have scored the goals without their passing.

“I’m really proud because the hardest part is done, but we have to keep going [and win the title]”.