Sydney FC shotstopper Danny Vukovic is out to finish off what’s been a stellar season for Sydney FC in the Hyundai A-League on Saturday night at Allianz Stadium.

Facing Perth Glory in their semi-final (kick off 7:50pm AEST), Vukovic has called on his squad to finish what they started as the glovesman revealed a revival in confidence is what’s behind the Sky Blues record breaking run.

“It’s great to set records, you don’t really set out to get records or accolades but when you do make records it obviously means you’ve had a good season,” Vukovic said.

“I think everyone in the team, the whole squad, has had a good season and now it’s about finishing it off.

“I think it’s my best season to date. I think for many people in the team it’d be their best season, they’ve all lifted their game, we’ve been given a great environment to be the best we can be and I think a lot of people have flourished in the environment we’ve got here.

“For me just a lot of things have fallen into place, coming home, working with Arnie and John Crawley and playing with such a great group of guys,” he continued.

“For me personally confidence was a big thing and something I needed to regain, so playing behind this great team has been easy for me to regain that confidence.” 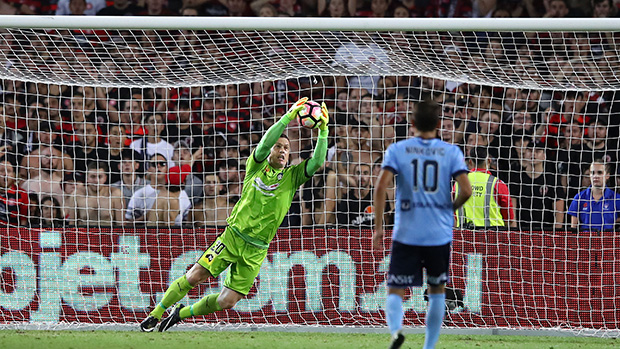 Facing a former club in Perth Glory in Saturday’s semi-final, Vukovic said he wasn’t fussed with who he faced in the Grand Final decider.

“We’re looking forward to it [the semi-final],” Vukovic said.

“It didn’t matter who we drew. Whoever was put in front of us we would have taken on gladly, we weren’t really worried about playing any one club in particular.

“We always set out every season to play finals, we’ve done that and we’re looking forward to it and I’ll be doing everything I can to win the game for my team.”