Smeltz lashed in a knock down from a free kick to secure the three points for the Sky Blues after Jacques Faty had given Graham Arnold’s men a first half lead.

Dario Vidosic equalised in the second half but Sydney FC weren’t to be denied and the Sky Blues move level on points with the Wanderers in joint second place, one point behind leaders Brisbane Roar.

Graham Arnold: “Tonight was a real football match.  I thought we controlled the game very well.  I came for three points and we got three points.  I thought that when they got back to 1-1 they really threw open their game plan and there was a lot more space.  We got more control of the ball and control of the game and on the counter we were quite dangerous.

“The Wanderers are having a very good season and their confidence is sky high even though they lost last week.  Everyone is writing how well they are playing and we came here to make us hard to beat and nullify the spaces.

“Their danger men of Nichols, Bridge and Castelen I thought we kept them quite quiet tonight and if you can do that then you are halfway to getting the job done.”

22’ FATY GOAL – A right wing corner is floated to the far post where it is headed back by Ryall into the six yard box and Faty rises first to nod home.

57’ VIDOSIC GOAL – Castelen finds an unmarked Vidosic on the edge of the area. He takes a touch and curls the ball past Janjetovic.

89’ SMELTZ GOAL – A right wing free kick is played to the far post and headed back to an unmarked Smeltz who blasts into the top corner. 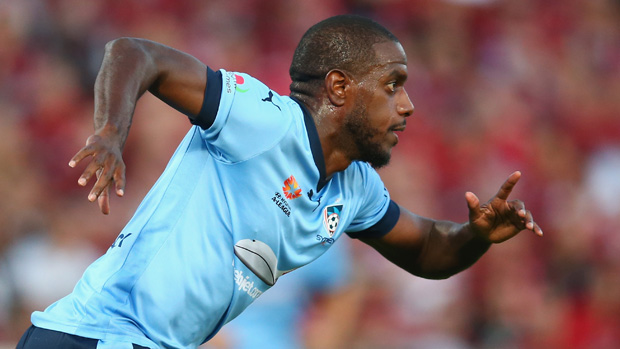 8’ VIDOSIC CHANCE – Vidosic flicks the ball between two defenders to open up a chance at a shot but pulls it wide.

11’ CASTELEN SHOT BLOCKED – Bridge evades the offside and breaks clear chased by Jurman.  He flicks the ball back to Castelen who shoots but Grant is there to block with his body.

17’ CASTELEN CHANCE – Castelen is played in by Neville and from an angle shoots into the side netting.

35’ NICHOLS CHANCE – A bizarre incident where the linesman flags for offside against Bridge but referee Delovski ignores him allowing Nichols to run clear but Janjetovic is equal to it.

36’ HOLOSKO CHANCE – The winger breaks clear on the right and flashes a shot across goal.

77’ JANJETOVIC SAVE – A one two between Nichols and Baccus puts the latter clear and Janjetovic makes a brilliant save.

Head Coach Graham Arnold made one change to the team which started against the Newcastle Jets seven days earlier.  Matt Simon replaced George Blackwood up front with the 18 year old moving to a place on the bench alongside Aaron Calver who came in for Robert Stambolziev.