A first half brace to Leena Khamis earned the Sky Blues Sydney Derby bragging rights and their first points of the Westfield W-League 2015/16 season.

Sydney FC were handed a dream start with Leena Khamis opening the scoring after just two minutes as she popped up at the far post to rifle home after Renee Rollason’s free kick had rattled the woodwork.

Following a frenetic opening 10 minutes the game settled as both sides saw plenty of the ball in the middle of the field, however it was the Sky Blues with the prime opportunities in the opening 45 minutes as Leena Khamis doubled the Sky Blues lead in the 36th minute after a scramble in the Wanderers box saw her bundle the ball home. 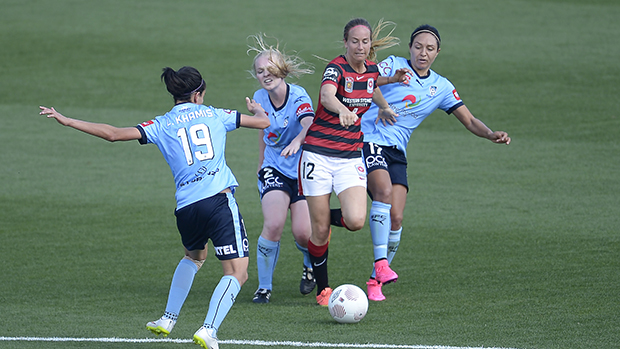 Dan Barrett: “It’s fantastic, to win the Derby they’re always tough, but on the back of two tough defeats it’s always pleasing. What we do at training we brought to the match. We got back to basics and transferred what we did during the week into match day and we executed it much better today which was great. We created enough chances to put the game away and the way we defended and worked together as team was pleasing.

“Leena is so important to us. She’s been around the team a long time, she’s respected by the players and coaching staff and she drives the team. Today it was all her defensive headers and clearing headers that were as important to us today as the goal. She was outstanding today and best on ground.”

2’ KHAMIS GOAL – Renee Rollason floats a free kick into the area from the left flank that rattles the bar with Leena Khamis popping up at the back post to fire home from close range for the opening goal of the Derby.

36’ KHAMIS GOAL – A scramble in the Wanderers penalty area sees Leena Khamis bundle the ball into the back of the net off an attempted Wanderers clearance to double to the Sky Blues lead.

83′ GREY GOAL – Halloway cuts to the byline in the dying minutes to cross to an unmarked Grey to head home.

7’ AMMENDOLIA HITS THE BAR – Eliza Ammedolia rattles the Sky Blues crossbar as she unleashed from distance with her rising drive evading Sham Khamis in goal.

28’ KHAMIS HITS THE BAR – Following a brief drinks break, Teresa Polias whips in a delayed corner that finds Khamis rising highest however her header hits the bar and is cleared.

49’ SPENCER SHOT – Spencer is released into the area on the right by Kyah Simon however Whyman is equal to Spencer’s fierce effort as she tips it around he post.

66’ SIMON SHOT – With time and space to shoot Kyah Simon unleashes from distance however Whyman plucks her effort out of the air.

76’ KHAMIS EFFORT SAVED – Neat interplay between Khamis and Simon on the edge of the area releases Khamis but her effort is saved at the near post.

78’ IBINI SHOT – Princess Ibini is played in on goal on the left flank by Spencer but her low effort is smothered by Whyman denying the youngster her first ever W-League goal.

85’ SPENCER DENIED  – Twice within the space of a minute Spencer is denied by Whyman as she produces two sharp saves at the death to keep the deficit at one.

Sydney FC Head Coach Dan Barrett welcomed back his contingent of Westfield Matildas players with Alanna Kennedy, Amy Harrison and Kyah Simon all returning to the starting eleven following their absence from the match against Canberra United last Saturday. Sham Khamis made her first start in goals for the Sky Blues this season with Michelle Betos sitting out injured as replacement goalkeeper Alyssa Harris took her place on the bench. Sunny Franco was consigned to the substitutes after starting her previous two matches while Ellyse Perry was absent with cricket duties. Olivia Price continues to remain sidelined with an ankle injury.