We caught up with Sydney FC Westfield W-League and Westfield Matildas defender Alanna Kennedy to get her take on the Matildas Rio 2016 Olympic Games qualification.

Congratulations on qualifying for the Olympics, can you put into words how it feels to have made such an achievement?

“It’s amazing. It has been a long time coming, 12 years since the Matildas have been at an Olympics so I guess there is a relief and a lot of history behind the achievement for those who have missed out before. Everyone is really excited and I think it’s massive for women’s football in Australia.”

You’ve played a big part in the qualification, playing every minute in every match, what have you made of your performances?

“I’ve been fairly happy with my performances. I think last night as a team we were a little bit shaky at the start and I think we and myself included were a bit nervous considering the sense of the occasion and what was on the line. But overall I think we’ve played really well and I’ll see whether or not I start against China on Wednesday.”

There’s been plenty of pre-tournament training camps, including during a disrupted W-League season, how beneficial have they been?

“I think every training camp that we get together is beneficial. There is always a plan put in beforehand of what we want to achieve in each camp and they have all been successful. I think the amount of preparation that we’ve had, both in the lead up to this and the World Cup were really good in helping us get to where we wanted to be, so I think they’ve been really important.”

What’s been the biggest surprise from the qualifying tournament so far? How much have you exceeded your expectations?

“I think we always believed we could firstly qualify but secondly win every game that we play, so it may have come as a surprise to some but it’s what we were always striving for and something we always believed we could do. It’s great to know that we’ve qualified with a game in hand but I guess one of the big upsets is Japan and the fact that they won’t be at the next Olympics after they failed to qualify.” 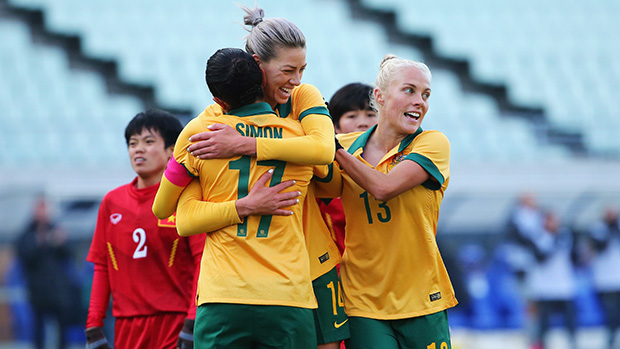 What do you put the girls performances down to? How much of a follow on effect has the World Cup campaign had on this tournament?

“I just think the time that we’ve invested and been allowed with the camps that we’ve had leading up to the qualifiers and the flow on effect from the World Cup has been good as well. Although it’s a slightly different team at this tournament it’s still the same goal and Staj still had the same plans so that’s something that we’ve executed and we’re going to an Olympics now so it has obviously worked.”

What are your hopes for the Olympics? How far do you think you can go?

“Our goal has always been to compete for medals and match it with the best teams in the world. We’ve definitely got the quality within our team and now it’s just about continuing to put in the effort and the work to push for medals in Rio. There is certainly a belief in this group that we are good enough.”

Anything else you want to add?

“Only that the support from back home has been amazing. To know how much people have rallied behind us, and that’s not just football people, has really given us that extra bit of motivation and inspiration so we just want to thank everyone back home. We can’t wait to get to Rio and do Australia proud.”