Jurman Declares Himself Fit For Final

Jurman was taken from the field with blood pouring from above his eye following a head clash while contesting a corner and required 10 stitches post match for the gash.

With a title on the line, the towering centre back said he’s not concerned about the knock and just wants to bring home the trophy.

“The eye is feeling good. It’s bandaged up still but I’ll be alright,” Jurman said.

“I was just thinking, one moment I thought I was about to score and then the next I was leaking blood everywhere. Obviously it wasn’t the best feeling but once I got cleaned up I wanted to get straight back on the field.

“I couldn’t believe my luck to get three headers straight in a row after coming back on. I thought the Adelaide players were targeting my head straight away but it was pretty funny and the crowd seemed to enjoy it as well.

“I’ll be fine [for the Final]. We’ll put some padding or something there and just forget about it and worry about winning the Cup.” 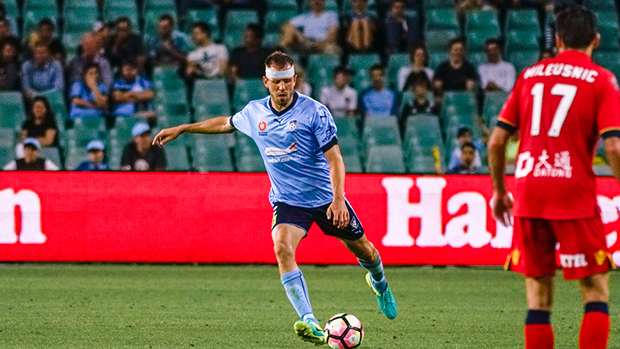 Contesting another Final in Melbourne, Jurman recalled memories of the 2010 Hyundai A-League Grand Final win, and said it would be an amazing feeling to bring a first ever Westfield FFA Cup back to Sydney.

“I think it’s going to be pretty intense,” Jurman said.

“The two in-form teams are in the Final so it’s worked out well for the neutral. We’re just worried about ourselves, we just have to put in a good performance and bring the Cup home for our club and the fans.

“It’s going to be awesome to do it again,” he continued.

“Especially at AAMI Park, to do it in Melbourne which we’ve done before, not an FFA Cup final but and A-League Final, it would be a great feeling.”

Sydney FC take on Melbourne City in the Westfield FFA Cup 2016 Final at AAMI Park on Wednesday night (kick off 7:30pm). Catch the match live on Fox Sports or follow @SydneyFC on Twitter for updates.