Juniors mixing it among their idols

Each home game juniors from local Sydney clubs enjoy unique experiences on pitch and with their favourite players and support their team from a whole new perspective.

There are various on-field activities that local grassroots footballers have participated in over the past couple of weekends, including being ball kids, walking out with the players as their game mascot, playing in small sided games at half time on field, as well as being part of on-field presentation aspects.

Each association is given this opportunity throughout the season, with a number of their local clubs providing the players for this unforgettable experience at each of our home games.

The Sutherland Shire Football Association (SSFA) provided this opportunity to their players at our recent game against Melbourne on 5 November.

Sydney FC member and SSFA Treasurer, Giulio Di Stefano, who organised the players to participate said it was a fun and memorable experience for the girls and boys from each of the six clubs.

The night was capped off with the win against Melbourne but most importantly, all of the SSFA players and parents appreciated the opportunity and the kids are still talking about being on Allianz Stadium and so close to the action. 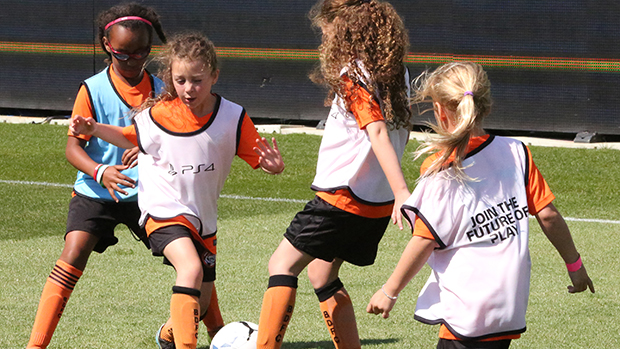 Sydney FC are next at home against Adelaide United at Allianz Stadium on Saturday 26 November (kick off 7:50pm). Northern Suburbs Football Association (NSFA) will enjoy their game day experience for this clash.

Girls from the Sutherland Shire Football Association (SSFA) have the Adelaide United Westfield W-League game at Seymour Shaw on Sunday, 27 November. Sydney FC and Junior Blue members get free entry. Otherwise, tickets are $12 for adults or $6 for junior/concession and can be purchased at the gate or at the SSFA office in Kareela.