Sydney FC Captain Alex Brosque said he’s as ready as ever for round one, with a massive Sydney Derby set to launch season 2016/17 at ANZ Stadium on Saturday.

The Sky Blues are undefeated against the Wanderers for over two years, and Brosque said he’s expecting that record to continue with the quality of the squad at Head Coach Graham Arnold’s disposal.

“I’ve put in a lot of hard work in the offseason with Elias the physio, Clarky as well, for this very moment. I’m ready for round one, whatever part I can play I’ll be more than happy to.

“I’ve been excited about round one since the draw came out to be honest.

“The last two years we’ve had the wood over them and put in some very good performances and I’m expecting the same on Saturday,” he continued.

“I really think the boys have the quality to go out and carry a good game plan, I think the quality is there to get the job done and I’m expecting that.” 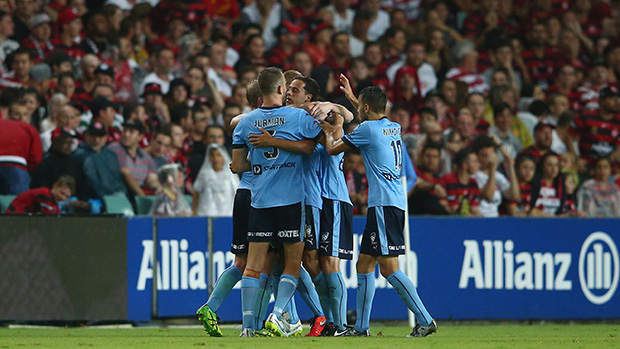 Brosque said the 2016/17 squad is one of the best he’s been a part of, having featured in numerous Sky Blues set-ups, and the club captain is confident they can carry over their pre-season form into Saturday’s clash.

“This squad is definitely right up there, not just on paper,” Brosque said.

“We’ve definitely been playing in a winning manner and showing that things are going very well.

“The additions we’ve made to the squad have been great, every single player is adding something different and pushing everyone else.

“In terms of depth, we’re yet to know what the starting 11 will be but whatever it is, whoever comes on, is going to have just as much of an impact.

“You can’t read too much into pre-season results but I think winning does become a habit,” he continued.

“We’re finding ways to win games, and win them quite well, and hopefully we do carry this form over into round one and get another good win there.”

Sydney FC kick off the season against the Western Sydney Wanderers at ANZ Stadium on Saturday 8 October. Catch the match live on Fox Sports or follow @SydneyFC on Twitter for updates.