Football well and truly runs in the Ibini household as brother and sister Bernie and Princess Ibini don the Sky Blues jersey in the Hyundai A-League and Westfield W-League.

As we celebrate Female Football Week this Friday night, Sydney FC star Bernie Ibini reflects on his sisters’ exploits on the football pitch.

The Sky Blues winger said from a young age his sister was always kicking a ball around the backyard and playing locally.

“When she was younger she used to play at Earlwood Wanderers, and even in the backyard she’d try and play with me and my brother,” Bernie said.

“She never got the better of me in the backyard though. When we were younger my brother and I had a bit of an age gap on her so it wasn’t too competitive, it was just a bit of fun.”

Both Princess and Bernie agree that he played an influence in her taking up football, as Bernie continued, saying he could tell she was talented from the outset. 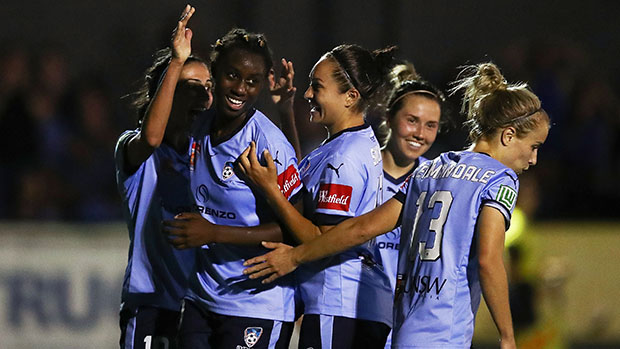 “I think I had a bit of an influence on her playing but having football run in the family has helped a lot as well. That’s all we did at our house was play football,” Bernie said.

“I got interested in football because of my family as they’re very passionate about it,” Princess continued.

“I also got into it by watching my brothers play from when I was very young.”

“She was definitely talented, our family has always been around football so that helped her as well. It was easy for her to pick it up because it’s all she ever knew,” Bernie added.

The brother and sister both encouraged girls to take up football, highlighting the many positives that come from playing at a grassroots level.

“Football is a great sport, it’s an enjoyable sport. Even if you’re not someone who wants to play seriously you can still have a lot of fun and enjoyment with your friends,” Bernie said.

“It’s a great sport to play as you can meet new people and create lifelong friends,” Princess continued.

“It’s also an opportunity to learn skills you can use in everyday life as it teaches you how to work with others and how to stay disciplined and achieve your goals.”

Sydney FC take on Central Coast Mainers at Allianz Stadium on Friday 10 March in their latest Hyundai A-League encounter. Buy your tickets today and be there as the Sky Blues send the Mariners sailing.