After notching his 100th cap on Saturday in the Hyundai A-League, Sydney FC winger Bernie Ibini said it was a privilege to have reached that milestone in his sixth season as a professional.

Ibini reflected fondly on his century of caps as he listed among other highlights his first goal for the Sky Blues as one that he’ll always remember from his time spent in the Hyundai A-League between the Central Coast Mariners and Sydney FC.

“I’m very honoured and very privileged to have made that milestone,” he said.

“Unfortunately we didn’t get the result on Saturday but I’m very happy to have reached 100 games in the A-League.

“I didn’t really think about numbers, when I first started out. I just wanted to play as many games as possible and try and play as well as I could. I never thought about how many games I’d end up playing by this time.

“My highlights would definitely have to be winning the Grand Final, scoring my first goal for Sydney FC against the Wanderers and winning the Premiers Plate as well.” 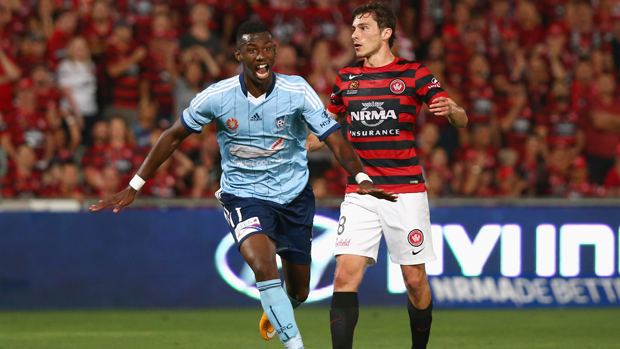 Having played in title winning sides, Ibini found similarities between those squads and the current crop at the Sky Blues as he looked ahead to Friday night’s crucial encounter away to Perth Glory with only three games remaining in the regular season.

“It’s right up there, the team we have at Sydney is a very good team,” he said.

“I think if we can play to our best there’s no doubt that it’s possible for us to go all the way.

“It’s a tough trip away from home but away from home we’ve been in pretty good form so we’ll be pretty confident and hopefully we can play the way we did on Saturday but get the result as well.”