Sydney FC equalled their best ever start to a season as they continued their winning ways with a comfortable victory over the Central Coast Mariners at the start of November – a long range Terry Antonis strike the highlight.

Two hard fought stalemates followed before a Janko double earned a valuable three points away, while another heart stopping Sydney Derby capped off the month as summer was ushered in.

Match Summary: A superb long range strike from Terry Antonis and a sharp prod home from Sasa Ognenovski within four first half minutes sealed the win.

The Sky Blues had numerous other chances to increase their lead over the 90 minutes while goalkeeper Vedran Janjetovic secured a second successive clean sheet with a late penalty save from Mitchell Duke.

The result means Sydney FC have made their joint best ever start to a Hyundai A-League season with 10 points from four games, equalling their opening four games of the 2009-10 Championship winning season.

Graham Arnold: “I’m very happy to get that out of the way. The positive thing was a clean sheet but they frustrated us, they got a lot of men behind the ball in the first half but at the end of the day we’ve won the game two nil. We could have had more but they could have scored a goal or two as well.

“I want to have a very strong home record here at Allianz and that’s seven points from nine at home.

“Milos is getting better and better and him and Antonis are two very good footballers that drive the team forward. Again we’ve got a big job still ahead of us but I’ve seen a lot of character.” 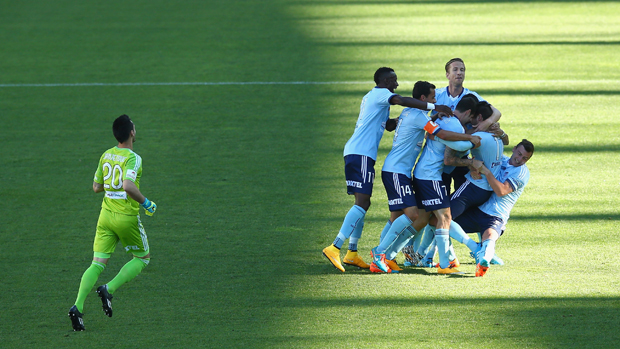 Match Summary: Sydney FC remain top of the league and have set a new record for their best ever start to a season after their scoreless draw with Adelaide United on Friday night.

With the teams separated only by goal difference heading into the match the opening minutes were cagey before Adelaide United enjoyed spells of possession in the first half for no reward.

Both sides headed in level at the break before a re-invigorated Sydney FC side emerged for the second half, creating a number of chances in stifling conditions in South Australia.

The Sky Blues thought they had taken the lead in the 68th minute after Nikola Petkovic curled in a long range free kick, however it called back after the kick was taken before the referee blew his whistle.

Adelaide troubled late on with Carrusca missing a prime opportunity from seven yards after Kamau had cut the ball back, however both sides were forced to settle for a draw with Vedran Janjetovic putting in a performance worthy of man of the match.

Graham Arnold: “We’re getting closer to being the finished product. We’ve still got a long way to go and the pleasing thing was defensively we were very strong again. They had probably a couple of better chances but we had chances as well and hit the post but overall, happy to go away with a point.

“Overall the game could have gone either way but to come here to Adelaide, and they’re in hot form at the moment, and to get a nil-nil we’re happy.” 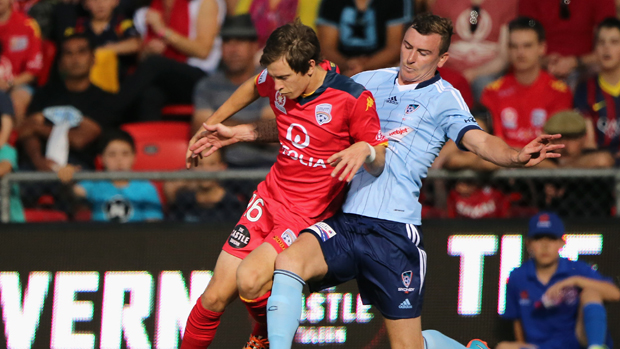 Match Summary: Sydney FC remain undefeated in the Hyundai A-League after a pulsating 0-0 draw with Melbourne Victory in front of a record breaking crowd at Allianz Stadium tonight.

They witnessed the Sky Blues’ fourth clean sheet in a row and could have seen the club take all the points, but Victory keeper Nathan Coe was in form to deny Brosque and Smeltz.

At the other end Sydney FC keeper Vedran Janjetovic pulled off three brilliant saves to deny Melbourne the spoils while goals for both clubs were ruled out in the opening six minutes for offside.

Graham Arnold: “I wasn’t happy with the first half yet we could have scored three goals. The second half was much better. It was a good exciting game for the fans, heart attack stuff for the coaches, lots of chances and end to end football.

“Overall we’re always striving to get three points at home and the most important thing is we got something.  They had chances and we had ours but the most positive thing is that’s four clean sheets in a row.

“Defensively we are very strong and the courage and the fight from the players is excellent.” 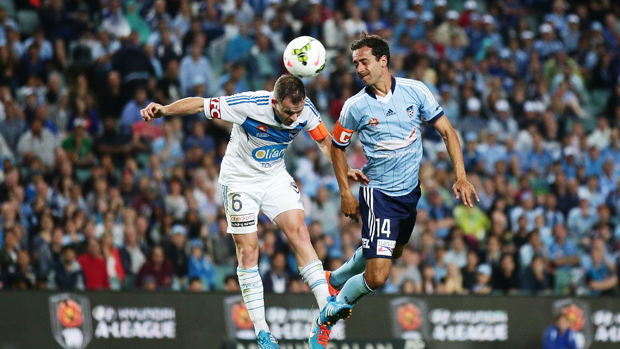 Match Summary: The Sky Blues had marquee man Marc Janko to thank for the goals, after the Austrian returned early from international duty to find the back of the net either side of half time.

Graham Arnold: “I was very happy with the performance and I thought the hard work and determination we put in was excellent.

“We deserved our win and the way we came together as a team was superb. Everyone put in a performance, particularly in the first half which is something we spoke about.

“Marc Janko came home early to play in this fixture and that decision paid off.  He thoroughly deserved his two goals.” 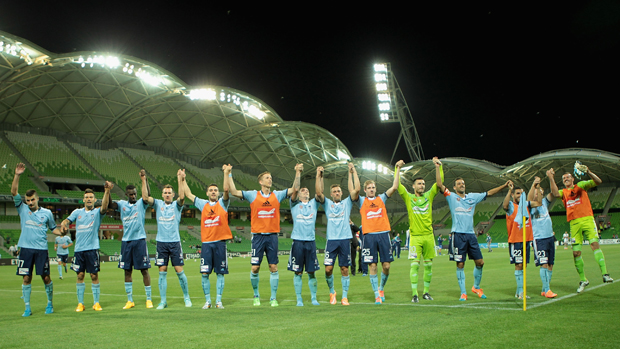 Match Summary: Sydney FC remained unbeaten having won a hard earned point in a 1-1 draw away at city rivals Western Sydney Wanderers in the Sydney Derby at Pirtek Stadium.

The Sky Blues fought back after a Tomi Juric goal had given the home side the lead on the half hour.  A wonder strike from Bernie Ibini four minutes later pulled Sydney FC level in a game which was marred by a bad injury to Iraqi midfielder Ali Abbas following a challenge from Wanderers midfielder Iacopo La Rocca.

Striker Mark Janko almost snatched it for Sydney FC in injury time with a free kick which bounced off the bar.

Graham Arnold: “Bernie scored a bomb of a goal but you have to be honest they were the better side in the first half. Once we were able to change the system at half time, I felt second half they didn’t create too much and we had a couple of decent chances to take the game.

“The news on Ali Abbas is terrible. It looks like ACL (anterior cruciate ligament) and MCL (medial cruciate ligament) injury.  I haven’t seen it [the challenge] on TV, so I would rather not comment but I was close to it and it looked terrible from being close to it.  Ali is devastated.  We lost Corey with an ACL on national team duty and now that.  He got smashed twice in two minutes and no yellow card.

“I was really happy with Rhyan Grant.  He got thrown in the deep end quickly and played for 85 minutes having been out for a year.  He got better as the game went on.” 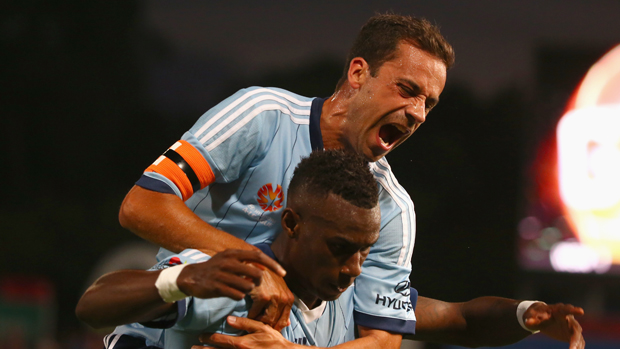 Sydney FC Memberships are coming soon for the 2015/16.  If you are a new Member, please register your interest at www.sydneyfc.com/membership/