The goals continued to flow as the Sky Blues only lost once as they ascended the table.

Match Summary: Sydney FC moved to second on the Hyundai A-League ladder, temporarily, after earning a hard fought win against the Newcastle Jets at Hunter Stadium on Friday night.

A solitary goal to Marc Janko, scoring in his sixth consecutive match to equal the A-League record, clinched the three points for the Sky Blues in what was a tight and tense encounter.

There was little to split the teams in the first half, with Seb Ryall having the best chance of the first 45 as he smashed a header against the bar before Marc Janko saw his effort on the rebound deflected wide.

A reinvigorated Sky Blues outfit found renewed pace in the second half as they piled more pressure on the Newcastle Jets defence and the pressure told as Robert Stambolziev forced a turnover that fell to Marc Janko who slotted the ball past Ben Kennedy in goal at the second attempt.

Alex Brosque: “We knew coming in that it wasn’t going to be an easy game, I think they had a bit of trouble in the past couple of weeks but since then they’ve kick on and have been playing some very good football, at home especially.

“You’ve got to be tough, you can’t always score three or four goals per game, we today was going to be difficult, but as long as we kept a clean sheet which we haven’t done in a while we knew we always had a chance to score. We’re very delighted.

“We’re gaining a lot of momentum at the moment, playing well and the team is scoring goals and I think we’re slowly starting to kick into gear and it’s exactly the sort of momentum we need heading into the final stages of the competition.” 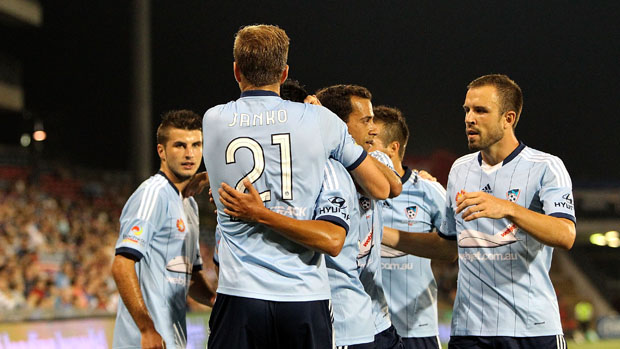 Match Summary: Sydney FC have moved into second place in the Hyundai A-League table after a rollercoaster of a match ended 5-4 to the Sky Blues.

The Austrian moved onto 16 goals for this season scoring with two penalties either side of a well worked second goal thanks to good work from Christopher Naumoff.

The Sky Blues had to come from behind with a super strike from defender Matt Jurman cancelling out Henrique’s opener within the first six minutes.

Janko got the next three before Kaluderovic and Lustica brought it back to 4-3.  Brosque swept home a fifth for the home side with two minutes to go, but Petratos made it an edgy finish for Sydney FC with a 90th minute goal to make the final scoreline 5-4.

Graham Arnold:  “I must have a strong heart, it’s been tested of late but we’re playing really good football. Defensively we talked about tightening things up, but look it comes down to concentration. You’re up 4-1, go for 5-1. That’s what a top team does and that’s stuff that we have to work one and stuff we need to move forward on.

“Our attacking play and the way we’re moving the ball is outstanding but I think tonight was as good a game in possession as probably any the supporters have seen Sydney FC play in the last 10 years.

“He [Marc] has bought into everything that we’re doing here and he’s in great shape, it’s not just about Marc with the goals that he’s scoring. Okay two penalties, but the build up and goal he scored in general play was great build up by us. We keep on improving, we keep on working and Marc values the team importance more than the individual performance. 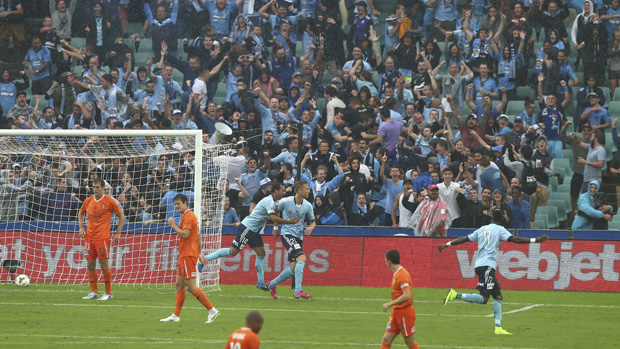 The Sky Blues dominated the majority of the game with Mark Janko hitting the post in the first half, before being felled in the box by Patrick Kisbnorbo.  However the Austrian watched on as referee Chris Beath waved away his claims for a penalty.

A Bernie Ibini strike midway through the second half was deflected onto the post by keeper Velaphi before James Brown struck the only goal of the game with ten minutes to play.

Graham Arnold:  “I thought we controlled 90 per cent of the game and we got hit with a sucker punch while we were going into attack.

“Overall the players put in a fantastic effort.  I thought the first half was a good dominating performance and when we had the opportunities to score we didn’t and that is when you leave the opposition in the game.

“Balls were flying across the face of the goal all night and on other nights we’d put them in, tonight wasn’t to be.  Maybe it’s good timing for this to happen, five games out before the end of the season and Finals series in front of us.  We get back to work on Monday and move forward.” 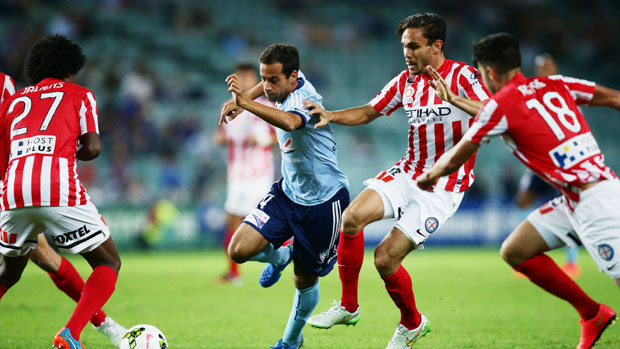 Match Summary: Sydney FC remain undefeated away from home and have reduced the gap at the top of the table to one point with their biggest ever win in New Zealand against the Wellington Phoenix.

A first ever Hyundai A-League goal to Jacques Faty, coupled with strikes to Shane Smeltz and Seb Ryall, eased the Sky Blues to a commanding first half lead that they didn’t sacrifice in the second 45 as they remain in joint second position with a valuable three points.

Joel Griffiths had a prime chance to open the scoring within the first minute of the first half but the former Sky Blue was foiled by Janjetovic in goals and from then on in it was all Sydney FC, as the Sky Blues put in a dominant first half performance to take in a 3-0 lead.

A more composed Phoenix came out in the second half and pushed the Sky Blues all the way as the Sydney FC back line were forced to work to preserve Janjetovic’s clean sheet. A fantastic Jurman lunge denied Krishna in one the Phoenix’s better chances before both sides were reduced to 10 men following dismissals to Riera and Smeltz with Sydney FC playing out to the final whistle to take the win.

Graham Arnold:  “We try to treat all the games the same whether we’re at home or away, the players like the routine when we’re away and it was a good performance.

“It was a good performance by us but one that we won’t get carried away with. I’ve asked the players in the last few weeks to lift the intensity, the pressure, and I felt we did that very well against Wellington. Our game plan today was to put some higher pressure on and try and keep their very good ball players in midfield off the ball.

“We’ve got weapons upfront, it’s a privilege when you don’t have Janko that you have Shane Smeltz.” 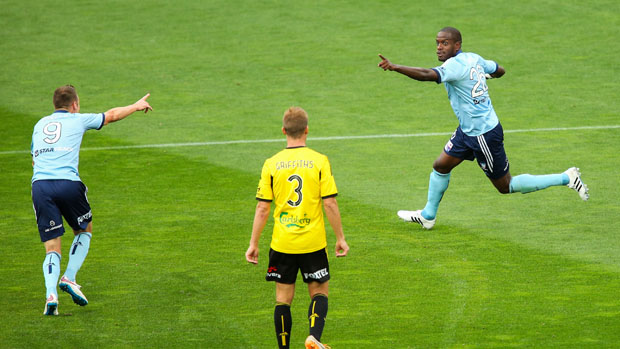 Sydney FC Memberships are now on sale for the Hyundai A-League season 2015/16.  Head to www.sydneyfc.com/membership to become part of the Sky Blues family!