Sydney FC heralded in the New Year with a match against the Newcastle Jets at the picturesque WIN Stadium in Wollongong before breaking for two weeks for the AFC Asian Cup.

Injury replacement signings re-invigorated the squad during the break and following the resumption of the Hyundai A-League, away to the Central Coast Mariners, the Sky Blues began their incredible run of form that would eventually culminate in a Grand Final berth.

Match Summary: Sydney FC had a goal disallowed and created a hatful of chances but couldn’t secure the vital strike which would have given them all three points against Newcastle Jets at WIN Stadium.

A crowd of well over 11,000 fans created a fantastic atmosphere in Wollongong and watched on as Ibini, Janko, Brosque and Triantis all forced the Jets keeper Ben Kennedy into a series of fine saves.

Janko had the ball in the back of the net just after the half hour mark with a spectacular volley, which would have been a contender for goal of the season.  However referee Lucien Laverdure, and his assistant controversially ruled the goal offside and the match ended all square.

“Second half we had the chance, I think they only had one chance. It was something like 34 entries into their penalty box to their seven so I just said to the boys at the end of the day it was a good effort.  The performance was better, probably our best 90 minute performance, but we’ve got to become more ruthless in front of goal and kill teams off.

“It’s fourteen games and we’ve only lost three in fourteen but the mentality of the players is getting better.  I am so determined to take this club to the top and change the culture and make it the biggest club in the country.” 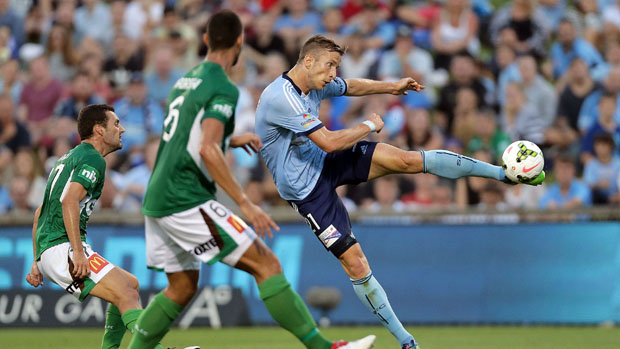 Match Summary: Sydney FC produced one of the performances of the season to dispatch the Central Coast Mariners 5-1 at Central Coast Stadium.

A brace to Marc Janko coupled with strikes to Bernie Ibini, Alex Brosque and a first ever A-League goal to Christopher Naumoff earned the three points for Head Coach Graham Arnold as he took bragging rights against his old club on his first visit back.

The Sky Blues dominated the first half as they enjoyed plentiful amounts of the ball to carve open space time and again. The deadlock was broken 16 minutes into the game through Marc Janko and Sydney FC never looked back as a goal two minutes later combined with Bernie Ibni’s final minute strike sent Sydney FC into the break three goals to the good.

The intensity in the second half didn’t abate and Marc Janko put the match seemingly to bed as he capitalised on a Central Coast error to increase Sydney FC’s margin. The Mariners slowly clawed back some possession however, and got their name on the scoresheet with a quarter of the match still to play but Alex Brosque sealed the win seven minutes later with a rare right foot strike.

Graham Arnold: “I’m just proud of my players because we’ve been through a lot. It’s not easy for team mates when they see four of their mates go down with horrific injuries and it takes its toll psychologically. Thankfully the Asian Cup really gave us a good chance to recruit well and those two French/Senegalese boys are probably 60 or 70 percent fit and they were very good.

“They have lifted the standards in the whole group and taken our professionalism to a whole new level and that’s what you want from foreign players and hopefully that’s the way we can move forward.

“The break might have been bad for other teams but we used it well. We gave the players one week off and then the next week we hurt them at training and really pushed them to run out games like that and Marc Janko is now settling.

“The performance was fantastic and I think we should have been four or five up at half time. Disappointing to nearly conceded another one or two on the counter when we had a corner but we’ll work on it. I spoke a lot about the senior players but I really want to give a lot of credit to Gersbach 17, Naumoff 18, Calver 18, years of age. I don’t enjoy anything more than developing Australian kids.” 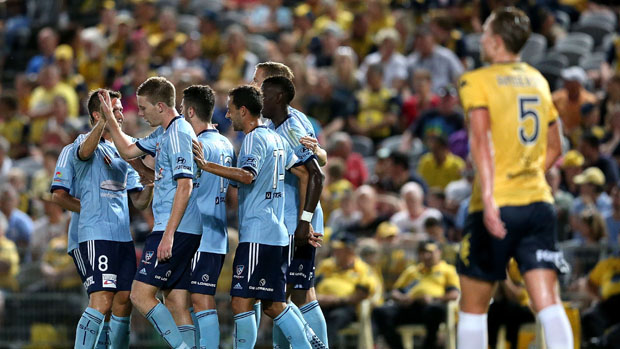