The Sky Blues struck a rich vein of form in February, scoring 14 goals in four matches as they ended the month undefeated both home and away.

A Valentine’s Day rematch against Melbourne Victory ended in another thriller while Sydney FC finished the month with the third instalment of the Sydney Derby which didn’t disappoint.

Match Summary: A nine man Sydney FC side defeated table topping Perth Glory 3-1 in a feisty game at nib Stadium in WA to keep their undefeated away record intact this season.

Penalties in each half from Marc Janko and Milos Dimitrijevic were followed by Bernie Ibini’s solo effort to secure all three points for the Sky Blues.

Both sides were reduced to ten men in the first half after Jacques Faty and Glory’s Dino Djulbic were sent off following a clash.  Sydney FC lost Nikola Petkovic to a second yellow card with 15 minutes to go in the game.

Marc Janko: “Big compliments to the boys today.  I thought how we fought today was very impressive and shows we are still alive.  I’m very proud of the team and think we were deserved winners.

“The sending offs opened up the game a little bit and benefitted Perth Glory with their long balls.  I think defensively we did a great job.” 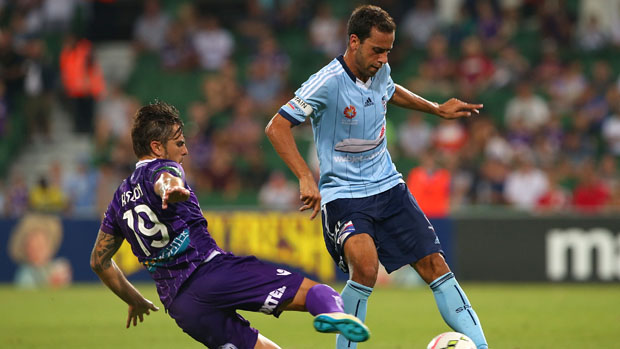 Match Summary: Sydney FC and Melbourne Victory played out a six goal thriller at Allianz Stadium as the points were shared between the two sides for the third time this season.

The Sky Blues took an early lead as Christopher Naumoff won a penalty when he was felled by Jason Geria in the area. Marc Janko stepped up coolly to convert the spot kick as he sent Nathan Coe the wrong way, dispatching the ball into the bottom left hand corner.

Following a period of sustained Sydney FC pressure, Victory drew level just after the half hour as a lightning quick attack ended with Barbarouses firing low and hard into the bottom corner.

A Gui Finkler strike just before half time saw the Victorians take the lead but a reinvigorated Sky Blues side came out in the second period firing, as they grabbed an equaliser again from the penalty spot with Shane Smeltz converting from twelve yards.

Nick Ansell thought he’d snatched the three points for Victory with a header from a corner with just over ten minutes to play, but a fantastic header from Shane Smeltz with five minutes to go drew the home side level and the Sky Blues almost snatched it late on.

Graham Arnold:  “I thought we were outstanding. I thought we had 15 average minutes. The first 30 minutes it was all us then they scored the two goals from transitions from us giving the ball away and maybe a little bit of complacency. Second half we played them off the field and the stats show it. Everything shows how good we were tonight and as I just said to the players, I couldn’t be prouder of the performance.

Now they have to believe, believe in what a hell of a good football team we’ve got. We can go a long way, we’ve played against the benchmark, I think they’re the benchmark this year. We were outstanding and as I said it was a great spectacle. I’ve only been involved in only three Big Blues but gee I’m enjoying them, they’re exciting games of football.” 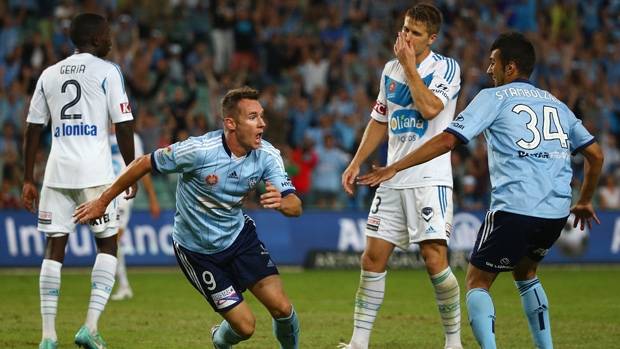 Match Summary: Sydney FC came back from a 2-1 deficit to defeat the Central Coast Mariners at Allianz Stadium and seal our third win over the Gosford club this season for the first time since August 2008.

The Sky Blues took an early lead in the first half before Fabio Ferreira put the visitors in front with two goals either side of half time.

A stunning strike from Rhyan Grant levelled things with 20 minutes to go before a brilliant solo effort from Shane Smeltz put Sydney FC in the lead.

Marc Janko took his tally to ten for the season to go joint top of the Hyundai A-League goalscoring charts with a sealer in the final minutes, and move the Sky Blues to within five points of the top of the table.

Graham Arnold:  “Positive out of it is four goals and three points and the character we showed when we went down two, one, to comeback.

“I have to say the Mariners were good today and it’s very healthy when I can look down the bench and bring someone on like Shane Smeltz who can change the game and we ran the game out well. I’m happy with the result, and that puts us in good position now to move forward and we can look forward to going to the small stadium next week at Parramatta.

“I know that the fans have gone home extremely happy, the spectacle of six goals and the way we finished the game, they’ll go home happy. We’ll come back in and get ready for the Wanderers.” 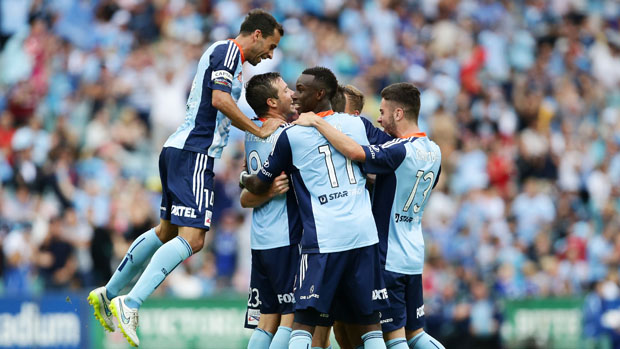 The Sky Blues took a 3-0 first half lead through Marc Janko.  The Austrian striker had claims for the first goal which seemed to bounce in off the shoulder of Ante Covic in the Wanderers goal following Janko’s header, but there was no mistaking his two further strikes.

Sydney FC were then pegged back by the team from the bottom of the ladder as the Wanderers levelled the score through a La Rocca strike and two from new signing Kerem Bulut.

However the tie was settled in the 74th minute when Terry Antonis latched onto a mistake in the Western Sydney defence and secured three points and 4th place on the Hyundai A-League ladder.

Graham Arnold:  “It was a crazy game but we showed that we have the quality to win a game like that.

“You’ve got to give full credit to the Wanderers.  They showed what Tony Popovich is made of, a team is always similar to their coach and they fought extremely well.

“When we had Antonis and Smeltz to come on I was always confident of winning the game.  We’ve got some really top footballers at this club and we are a team who can score goals.

“We’ve got a real good team spirit in the dressing room and some gutsy characters and experience in there.” 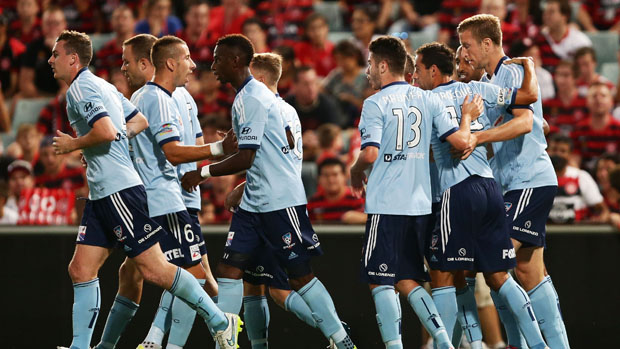