The Sky Blues sealed their place in the Hyundai A-League Finals Series with three wins and one defeat in April, scoring 10 goals and only conceding four.

Playing three out of the four games on the road, Sydney FC equalled a club record and Hyundai A-League record by going the entire season undefeated away from home.

Match Summary: A string of defiant saves from Eugene Galekovic in the Adelaide United goal prevented Sydney FC from taking the three points in their final home game of the season at Allianz Stadium tonight.

The Sky Blues battered Galekovic’s goal with 16 attempts but he was equal to them all as he thrice denied Alex Brosque while also seeing a volley from Marc Janko ruled out for offside, as the Reds held on to take all three points with a solitary goal.

Awer Mabil struck the only goal of the match late in the second half as a Galekovic long ball released the young winger, who cut inside and fired into the bottom corner from just inside the box, and despite heavy pressure from the Sky Blues in the final minutes an equaliser could not be found.

Graham Arnold: “I couldn’t be prouder of the performance, at the end of the day the result is what it is but our style of football and the way we’re playing football is outstanding and as I just said to the players, these things happen.

“Things happen for a reason, at this moment we don’t know what that reason is, but it will make us a much stronger team and it’s character building. The players are obviously down, but I can’t complain, their performance was excellent, they gave everything they had and Eugene Galekovic had the game of his life. He made six or seven crucial saves that any other keeper in the league would miss and he’s got an assist.

“I go home tonight and I sleep well because we played great, I’m sure the fans go home disappointed but they go home knowing we put in a fantastic performance and Allianz is a beautiful stadium, I’ve had a lot of great success here, we’re having tough times at the moment here, but as I said everything happens for a reason.” 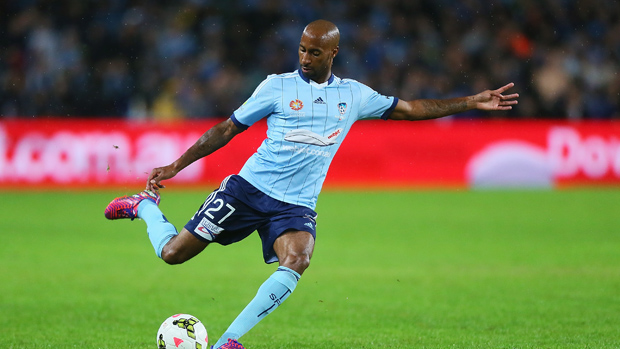 Match Summary: Sydney FC have moved to joint top of the Hyundai A-League after a 3-0 demolition of Perth Glory in Western Australia.

The Sky Blues continued their season long unbeaten away streak, stretching the club record to 12 games with a win which puts them in a key position to challenge for the Premier’s Plate with two games to go.

A first half goal from Alex Brosque gave Sydney FC the ascendancy before Bernie Ibini made it two with a spectacular strike on the hour.  Two minutes later the goalscorers combined and skipper Brosque put the game beyond doubt with a clinical finish.

The Sky Blues could have had more in truth and were unlucky with a number of shots which the busy Vukovic did well to save.

Graham Arnold: “My players were talking about it (Perth’s salary cap saga) at the pre-match meal and I had to refocus them, and pretty much tell them it’s got nothing to do with us.

“We have to be professional in what we do. I thought tonight was a very good performance from us.” 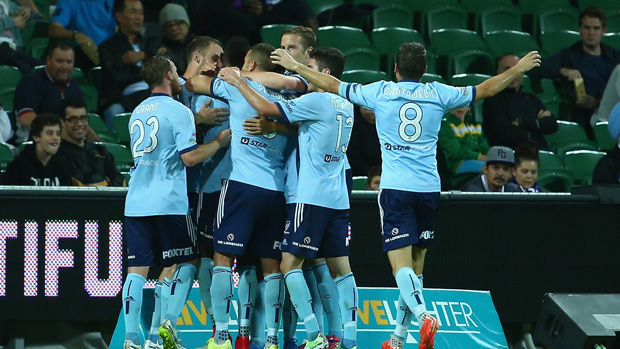 Match Summary: A scintillating second half performance saw Sydney FC come from a goal down to defeat the Newcastle Jets in a 4-3 thriller at Hunter Stadium.

The Sky Blues went in at the break a goal down thanks to a first half Enver Alivodic strike but an Alex Brosque brace and another superb strike from Bernie Ibini gave Sydney FC the ascendency within ten minutes of the restart.

Edson Montano pulled one back and an Andrew Hoole penalty saw the home side draw level with a quarter of an hour remaining but substitute Robert Stambolziev popped up 11 minutes from time to ensure the Sky Blues went away with all three points.

Graham Arnold: “I wasn’t happy with the first 20 minutes but I truly believe these boys have got the confidence in themselves that they have an extra gear and when they need to go up and extra gear they go up an extra gear.

“The most important thing is the three points and we are closer and closer to achieving our goals this year.

“What we’ve done to night is keep the pressure on Melbourne Victory tomorrow night. They will see we’ve come equal with them again and it will probably take it to the last round but they’ve got a very tough game against Brisbane Roar tomorrow night.” 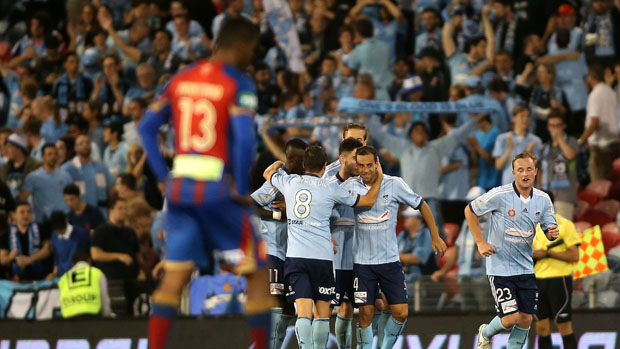 Match Summary: Sydney FC secured second place in the Hyundai A-League and earned a week off in the Finals Series with a tense 2-1 victory over the Wellington Phoenix at Westpac Stadium on Sunday afternoon.

Goals to Bernie Ibini and Shane Smeltz cancelled out Michael Boxall’s strike to ensure the Sky Blues matched their own record by remaining the only Hyundai A-League club to go an entire season undefeated away from home and set a new club record for points earned in a season (50).

It was a sprightly opening for the home side who had the chance to take the lead in the tenth minute from the penalty spot after McGlinchey was fouled in the area. Rolieny Bonevacia stepped up to take the spot kick however he blazed wide in what proved to be the Phoenix’s only clear cut chance of the half.

An early second half goal to the Phoenix set up a tense second half with both sides squandering opportunities to add the score card as the referee sounded the final whistle to confirm valuable three points and a home semi-final for the Sky Blues.

Graham Arnold: “Since Christmas, that’s 32 points from a possible 39 and we’re getting better and better. I don’t think there’ll be too many teams in the finals series who would be happy to play us.”

“I didn’t think at the start of the year, we’d get top two. We’ve stretched our goals. I gave them high standards to reach and they’ve reached (all) except one. One of the goals was ten clean sheets and we got nine. Everything else, they’ve reached. Now we go into a new competition for two games.” 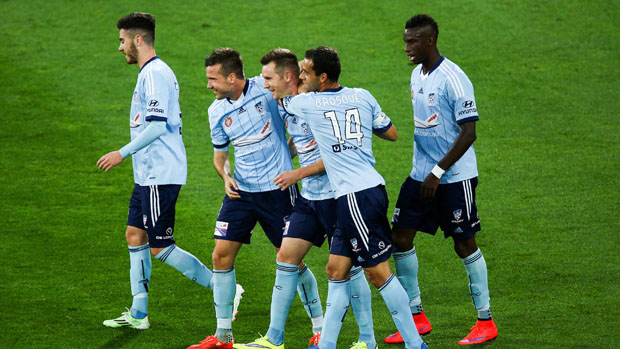 Sydney FC Memberships are now on sale for the Hyundai A-League season 2015/16.  Head to www.sydneyfc.com/membership to become part of the Sky Blues family