Ahead of Thursday’s Mates Night Out clash against Wellington Phoenix, Holosko said he’s confident Bobô and himself will add to their goal tallies that’s seen 13 goals scored between the pair to date, with the Slovakian labelling this his best ever start to a season.

“I think it’s my best start in my career. 18 games we’ve played and we are still undefeated, we are confident now,” Holosko said.

“I think this season is better for the whole team. I feel better and if you are winning your confidence is higher.

“Last season I scored 10 goals and I believe this season I’ll score the same or more because we still have nine games to go.

“I played with Bobô at Besiktas for three years and I think he is a great player,” Holosko continued.

“I have a good connection with him, he’s a very good striker in the box and very good with the ball, he is very strong and keeps the ball.

“He does a great job for the team, has scored seven goals and I’m sure he will score more goals by the end of the season.” 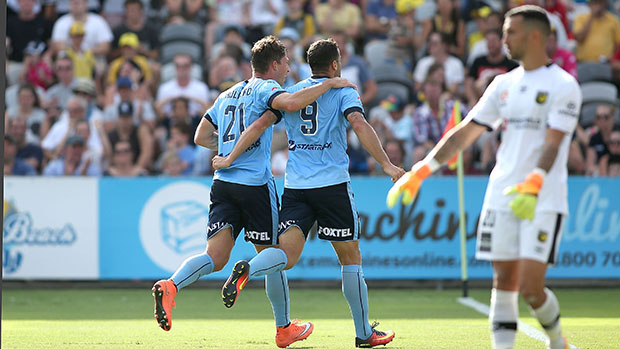 With the Finals Series on the horizon and the Sky Blues breaking numerous records, Holosko is confident Sydney FC can live up to their Invincibles tag.

“f you are winning you are invincible,” he said.

“We still have nine games to go and I’m sure we’ll do it [become Invincible] this year.

“We want to win every game. When we go on the pitch we are confident, we want to beat every team in the country and we want to stay undefeated in the league, all 27 games, plus the Semi Final and Grand Final.

“I thought we showed a great effort, we had a couple of chances and we were unlucky, but we are still undefeated, we are happy and looking forward to playing Wellington.”

It’s Mates Night Out as Sydney FC take on Wellington Phoenix on Thursday at Allianz Stadium (kick off 7:50pm AEDT). Grab two GA tickets for $50, enjoy a free sausage roll if the Sky Blues score two goals in 70 minutes and be there to back your undefeated league leaders.