It’s the moment Sydney FC fans have been waiting for – the sight of Sky Blues skipper Alex Brosque lifting the Premiers Plate this Saturday in celebration of a fabulous season and Sydney FC becoming runaway Hyundai A-League leaders.

The game against the Newcastle Jets also marks the return of Saturday afternoon football (5.35pm ko) at Allianz Stadium making it a fantastic family afternoon for Sydney and our Sky Blues fans.

Celebrations will also include one of the club’s most valued community partners, the Sydney Children’s Hospital Foundation (SCHF) with a range of activities taking place at the game.

The entire squad visited Sydney Children’s Hospital, Randwick wards this week, bringing smiles to the faces of young patients and raising awareness of the great work done by the Foundation, which exists to fund ground-breaking research and improve on every day care for patients at this hospital.

Since its inception over 30 years ago, the Foundation has provided over $100 million in much needed fundraising to purchase new treatment equipment and technology, support art, music and education activities for patients in the Hospital.

Sydney FC has worked with the Foundation for five years providing player appearances and experiences to Sydney FC fans in the Hospital, ensuring awareness opportunities thanks to the club’s fortunate position as a prominent sporting team in Sydney, as well as facilitate introductions to future corporate supporters. 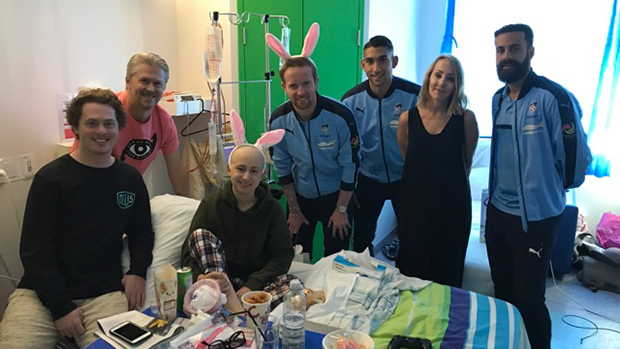 “Our partnership with the Foundation has been hugely rewarding and successful, and we are looking forward to helping promote and support their fantastic work at our celebration game this Saturday,” said Sydney FC CEO Tony Pignata.

“In addition to donations, Sydney FC provide an amazing experience for sick children and their families. By offering our young patients the opportunity to have a sideline warm up with the players and to be in the guard of honour, Sydney FC are giving them the gift of being a child first and a patient second,” said Nicola Stokes, CEO of Sydney Children’s Hospital Foundation.

On Monday the Sky Blues squad put on their Easter Bunny ears and delivered chocolate eggs and goodies to over fifty children, as activities kicked off at the hospital leading into Saturday’s game.

Sydney FC SCHF Ambassador Brandon O’Neill said he and his teammates love any opportunity to come into the hospital and provide relief to families and patients, particularly at important times of the year such as Christmas and Easter.

“It’s a great honour to be able to come into the hospital and meet so many courageous young people as well as the doctors and nurses who do such an amazing job,” he said.

“Myself and all of the players are always struck by the strength and character of everyone at the hospital, especially at these times of the year.” 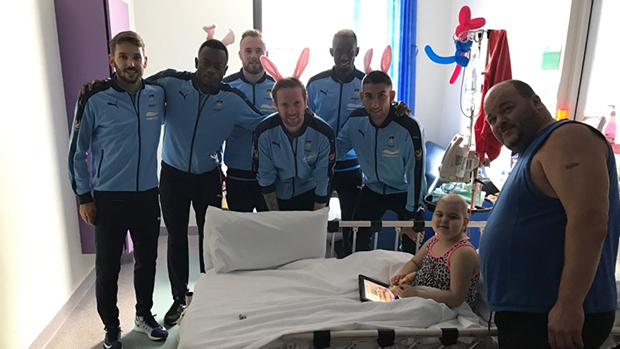 Foundation staff and volunteers will be pounding the pavement and collecting donations around Allianz Stadium on Saturday night, and if any Members or fans want to get involved in any work the Foundation does, we encourage them to visit the SCHF marquee which will be based in the Driver Ave forecourt.

Additionally, Sydney FC will host many hospital staff, volunteers and patients across many inner sanctum experiences at the ground, culminating in a special guard of honour for the entry of both teams pre-match.

For more information on Sydney Children’s Hospital Foundation or how to get involved or to donate now, please visit www.schf.org.au