Sydney FC’s Rhyan Grant and Danny Vukovic have made the cut and been selected in Ange Postecoglou’s 23-man squad for their upcoming March 2018 FIFA World Cup Qualifiers.

Grant, preparing to take part in his first ever senior national team camp, said he was delighted to have made the final squad.

“I was thrilled to have made the 30 man squad let alone the 23 so I’m pretty stoked and looking forward to getting into camp with the boys.”

Vukovic was equally happy to be back in the national team set up.

“I’m over the moon to be back in the Socceroos after seven years out,” he said.

“I’m looking fowrad to getting into camp with the boys and working hard in preparation for some important games now coming up.” 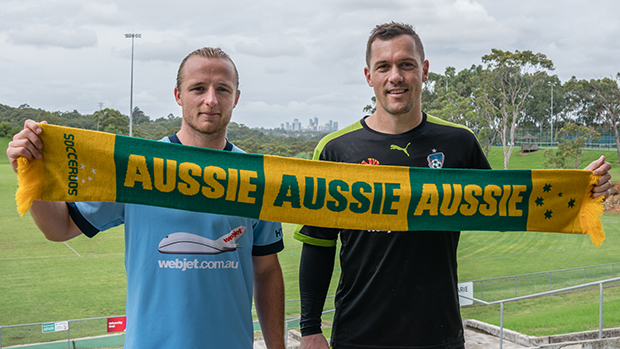 Aziz Behich, Mitch Langerak, Troisi and Williams return to the international arena after varying periods out of the squad as the Socceroos go into Matchday six and seven locked in a four-way battle for the two automatic spots at the 2018 FIFA World Cup.

“We’ve come up with a good strong squad that has a mix of experience, form and players who are playing regular football,” Postecoglou said.

“I was pleased with the collective game time the squad got through over the weekend and come into camp playing well.

“We face two important games in five days and it’s good to welcome back some guys who have been out of the squad for different lengths of time for various reasons and I’m confident the group we’ve selected will be ready to hit the ground running.

“There are a lot of important matches in what shapes as a crucial year for the team but the focus for us is simply Iraq on Thursday week and then the UAE in Sydney on March 28.”

The team will begin assembling in Tehran on Sunday ahead of next Thursday’s clash with Iraq. The seven players who have not made the final squad remain on standby for any last minute injuries this weekend.