While Arsenal haven’t been on our shores for 40 years, for Rhyan Grant there’ll be a familiar face in the Gunners set up for Thursday night’s clash at ANZ Stadium (kick off 7:30pm).

Lining up for the A-League All Stars in 2013, Grant was tasked with handling then Manchester United striker Danny Welbeck, and on Thursday Grant will see Welbeck again as he takes the field for the Gunners against the Hyundai A-League Premiers and Champions.

Grant recalled the tough task at hand when facing Welbeck in 2013, and said he’s looking forward to Thursday night’s encounter against the holders of the Emirates FA Cup and their star studded squad.

Arsenal In Sydney: The Official Site

“It was good facing Welbeck in the All Stars game back in 2013, it’s been a while but he’s a great player,” Grant said.

“He was pretty sharp in the All Stars game and it’ll be interesting to test ourselves against him again come Thursday.

“He was very sharp and very mobile so you’ve got to keep an eye on him, and that was the main difference between the level of players [on the night]. It was a great experience.

“They’re starting their pre-season so they’ll want their players getting fit and ready to go,” he continued.

“It’ll be interesting to see their new signing [Lacazette] as well, everyone has been talking about him at the minute so it’ll be cool to see what he’s like. They’ve got world class players and it’ll be great.

“We want to enjoy it, you don’t get to play against big teams all the time, we want to have a good time but also it’s our pre-season too so we want to get the ball rolling, play some football.” 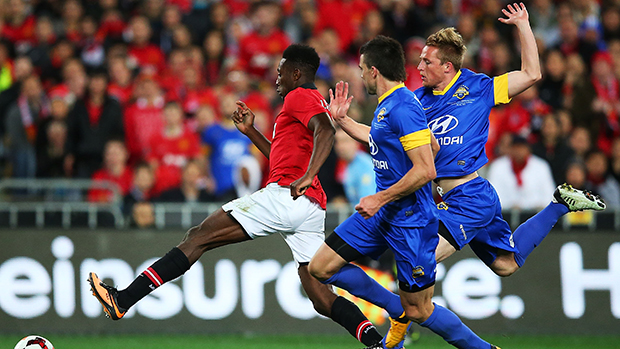 The Sky Blues have faced numerous English Premier League clubs in recent years, and Grant said that experience would aid in the squad’s preparation for Thursday’s clash.

“We’ve played against a few good Premier League teams over the last couple of years so it’ll be good to notch another one on the belt,” he said.

“I think it sort of helps [having played Premier League teams in the past]. It sort of gives you the idea of what to expect, but it’ll be another great experience to play against a world class opponent.

“It doesn’t happen every day so you’ve got to make the most of it and enjoy it while you can.

“We only started last week but it’s good to get early games in, it takes the running out of pre-season and to play against such a good team will be another good experience for us,” he continued.

Sydney FC take on English Premier League giants Arsenal FC at ANZ Stadium this Thursday 13 July at ANZ Stadium (kick off 7:30pm). The final tickets have been released, secure your seats now and be there for this massive exhibition clash.

For this and more exclusive stories, videos and other content, become a Member here and subscribe to the Harbour View.