Sydney FC defender Rhyan Grant has praised the character of the Sky Blues squad following their come from behind victory in the Big Blue at Allianz Stadium on Saturday.

The Sky Blues had to battle back from conceding their first goal for the 2016/17 season to claim their fifth consecutive league win, and Grant said the players really rose to the occasion in the second half to earn the three points.

“It was a massive win, Melbourne are always tough and it’s always a big rivalry when we play them,” he said.

“We went down, we haven’t had to come from behind this season, so it was a good test of character from us and I think we stepped up and really came home in that second half which was impressive.

“We rode our luck a little bit, but I think in the past as a Sydney FC team we didn’t always get that luck, so I think it’s good that that’s turned around for us this year.

“The team itself, everyone gets along really well this year, there’s just a real good connection here this year,” he continued. 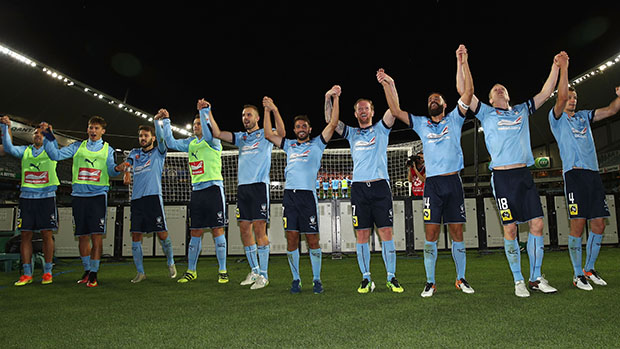 “The new boys who have come in are really good and we all get along like a house on fire so I think that goes a long way to making sure we’re playing well.

“Getting a couple of wins at the start of the season builds confidence and that rolls on from there. A lot of the boys are really confident at the moment and I think that’s showing.”

Voted Man of the Match, Grant said there was still room for improvement in his game as he looked ahead to Sunday’s Westfield W-League and Hyundai A-League double header.

“I think I’m doing ok, to be fair on the weekend I didn’t think I was that great,” he said.

“Everyone wants to win every week, every team is like that and it’s just second nature to want to go out and win so you don’t really talk about getting on a run.

“When it’s pointed out to you that we’re five on the trot now in the league you do think I wonder how far we can go but it is very early, the season is very long and we can’t get ahead of ourselves but it’s a good start.

“It will be a good game on a Sunday, we don’t get many Sunday games,” he continued.

“Perth are doing ok so it’ll be a tough game for us but I’m sure we’ll be up for it and quietly confident.

“We played them earlier in the season obviously but they’re a good team and we can’t look into the earlier win too much.

“It’s a great thing that we do [the double headers]. The W-League has just kicked off now so it’s good to be able to get them in before us. Hopefully the crowd comes out for both games and we can have a good turnout.”