Grant Out To Cement Spot

Sydney FC defender Rhyan Grant said he’s out to cement the Socceroos right back role as he takes part in his first national team camp in Tehran.

The Sky Blues full back, enjoying a stellar Hyundai A-League 2016/17 season, said it fell squarely on his shoulders as to whether he remained on the right side of the Ange Postecoglou’s defence on a permanent basis.

“I’m very new to the team so I’m just worrying about trying to impress and do well and make my mark,” Grant said.

“There’s been a few players to play right back the last couple of years so if I get my chance and I do well I think I can stay in the squad, that’s what I’m hoping, it’s all up to me at the moment so we’ll see how it goes.

“It feels really good to be a part of the setup,” he continued.

“We got into Tehran late on Monday night but I’m feeling good to be in camp.

“Everyone [I’ve met so far] has been very welcoming. I knew a few of the staff and the boys but the one’s that I didn’t have come straight up to me and welcomed me and said hello and filled me in with all the details so it’s been good.” 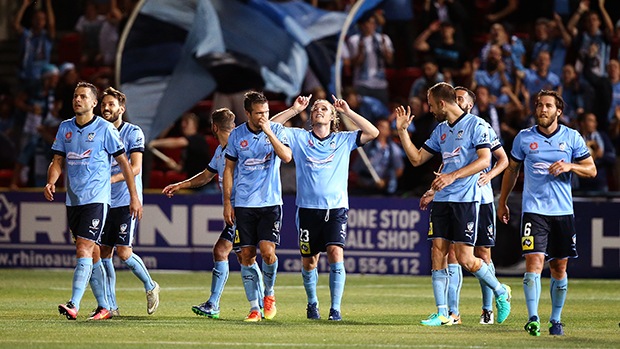 Grant said he never expected the call up, saying it only sank in once he made the extended squad, as he set his sights on a strong opening against Iraq on Thursday evening.

“There was a few people in the media talking about it [a Socceroos call up] but I didn’t really take it too seriously,” Grant said.

“I didn’t read too much into it but when I was selected in the 30 man squad I thought about it pretty seriously and I was lucky enough to make the final cut.

“I’m just really excited to have made it but I never really thought it would happen this year so I’ll just run with it.

“I’ve always just tried to play the game and enjoy it in the A-League, I never really thought about much further on.

Obviously everyone has goals and being selected now has opened my eyes up a bit and it enhances my goals in myself.

“They’ve been doing well. Ange is a great coach and since he’s come in Australian football has gone on a long way,” Grant continued.

“The boys are doing well and hopefully we can continue that in the next couple of games and make sure we really come home strong and hopefully that starts on Thursday.”

Grant and the Socceroos take on Iraq in their FIFA World Cup 2018 Qualifier on Thursday night (kick off 11pm AEDT). Catch the match live on Fox Sports and the Nine Network.