Grant Not Fazed By Derby Dominance

The Sky Blues are undefeated in over three years in the Derby, and are undefeated in 19 Hyundai A-League matches to date, however Grant said that those stats would do nothing but spur on the squad’s already peaking confidence.

“It’s a big rivalry and it’s good to have it over them, but we don’t approach it any differently,” Grant said.

“It’s all about us at the minute, we’re doing quite well and we’re just looking to take it as another game and we generally do that.

“As a group we’re pretty confident, we’re on a pretty good run at the minute and we go into every game confident that we can win.

“It doesn’t matter which team we’re playing and this week will be no different. When you look at it, we’re top of the table at the moment so we’re confident playing any team and hopefully that confidence shows on the weekend.

“Having said that players feel they still are not playing to the full potential as a group of individuals and we are looking to hit our straps come finals time.

“Every team at the minute is trying to be the first team to knock us off the pedestal,” he continued.

“We’re just worrying about ourselves and making sure we go out there with Arnie’s game plan and pull it off.” 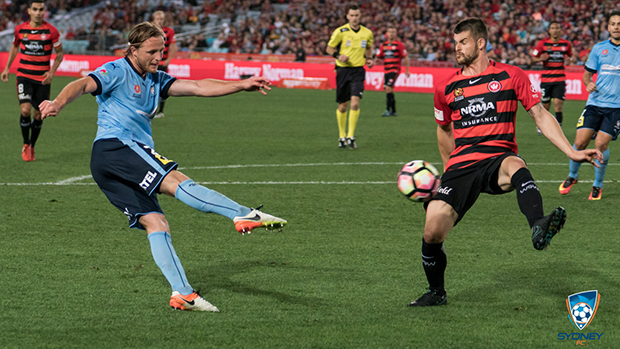 Grant said that while the Derby is a crunch match for the players, it’s even bigger for the fans, and the Sky Blues fullback said he was hopeful of continuing to impress the Sky Blues’ faithful who travel to ANZ Stadium on Saturday.

“It’s a massive game, not only for us but for the fans,” Grant said.

“As players you obviously look forward to these games but I think it’s more for the fans, they love the atmosphere and the games you put on.

“It gets more intense every time. It’s a massive rivalry as it has been since it started.

“You can tell from how many games we fill out at home and how many come to the away games how important it is to them [the fans] so it’s obviously getting bigger and as a player it’s exciting to see that.

“We’ve played out there a lot of times over the years and it’s a good stadium. It holds a lot of fans so hopefully it’s a packed house.

“We’ll try our best as always and we’re quietly confident we’ll come out on top.”