Sydney FC’s Graham Arnold has agreed to become the next Head Coach of the Socceroos following the conclusion of the 2018 FIFA World CupTM in Russia.

Sydney FC’s Graham Arnold has agreed to become the next Head Coach of the Socceroos following the conclusion of the 2018 FIFA World CupTM in Russia.

Arnold, who is the Sky Blues’ most successful and longest serving A-League coach, will finish up at Sydney FC at the end of May.

Sydney FC Chairman Scott Barlow congratulated Arnold on his new role: “Graham has done an outstanding job for Sydney FC over the last 4 years and has proven himself to be the best coach in the country.

“Although we will be sad to see him go at the end of the season, I’d like to thank him for the huge contribution he’s made and congratulate him on this new appointment.

“To be blunt we didn’t want Graham to leave and we offered him a substantially bigger and longer contract to stay, but the lure of coaching his country has ultimately proven too much, and having complied with the terms of his contract, we would not stand in his way.

“Graham remains entirely focused on Sydney FC for the remainder of the season and on leading our team to back-to-back Premierships and Championships.” 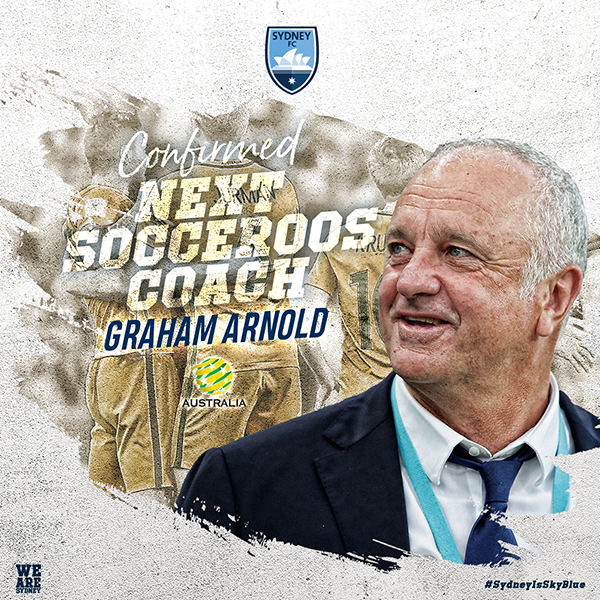 Once Arnold takes the reigns of the Socceroos, Sydney FC will have provided both of Australia’s national team coaches.

“At Sydney FC we provide the best possible environment for coaches to achieve success. We are proud that both the Matildas Head Coach, Alen Stajcic and the next Socceroos Head Coach, Graham Arnold are products of this environment.

Arnold said: “This was an extremely difficult decision for me to make as I love the club, the players and the fans so much and it was always my dream to coach Sydney FC.

“I am fully committed to the club, to the players and the fans until the end of the season and I am fully focussed on achieving more success.

“This is a fantastic club and I am thankful to the Chairman, the board and CEO for making available the resources to achieve what we have so far.”

The Sky Blues have already started looking for a successor for Arnold and Chairman Scott Barlow is confident of making an appointment by the end of this season.

“Some weeks ago we begun the process to find a coach who will fit into our club’s culture and football philosophy, and who will build on the foundations of success we have in place.

“We will be looking internally within the club, across Australia and around the world before making a decision and expect to make an announcement by the end of May,” he said.