Making the jump to NPL 1, Gonzalez said the transition was great preparation for a step up to the Hyundai A-League, as he said the Sky Blues performance against Rockdale in Round 1 was a good indicator of how the squad will fare.

Training with the Sky Blues Hyundai A-League squad on occasion, Gonzalez also said taking part in that environment would also aid his development.

“It’s been a good jump to NPL 1. We’ve only played the one game so far but I think our game against Rockdale was really good competition for us,” Gonzalez said.

“We handled ourselves pretty well, obviously it’s a lot more challenging than NPL 2, but I think we’ve done well and I’ll think we’ll have a good season based off that game.

“I think that’s our structure has got to be better and we’ve got to make sure we compete physically with them which I think we did in Round 1.

“It’s been good playing against more experienced players. It’s a good challenge for us because a lot of us obviously want to start making that step up to the A-League,” he continued.

“Coming up against experienced players like that, like Ante Covic and all those ex-A-League players, will be a good test for us and help us make that transition if the opportunity presents itself.

“I think every now and then when we train with the A-League squad, the standard and quality is very high, it’s always 100% and it’s good to get that insight into what it’s like to play in an A-League team and also what’s required of us to make it.” 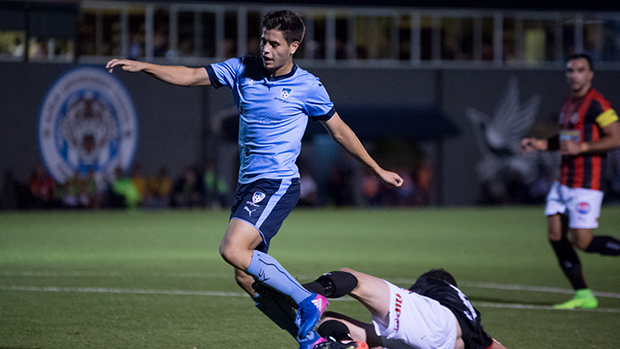 The Sky Blues face Sydney Olympic in Round 3 on Saturday at Lambert Park (kick off 7:45pm), and Gonzalez is relishing facing former Sky Blue teammates.

Yianni Spyrakis, Max Burgess, Hagi Gligor all played alongside Gonzalez in Sydney FC’s Foxtel National Youth League side and Gonzalez is expecting a good test against another of the powerhouses of the competition.

“It’ll be a good game, they’re two from two and I think they’ve got a pretty young side as well,” Gonzalez said.

“We’re coming up against Yianni who played with us last year, so it will be good to come up against their team and it will be a good contest for us as well. I’m looking forward to that game.

“It’ll be good to play against former Sydney FC players. I haven’t seen those boys in a while. We obviously played with them but I don’t think we’ve ever played against them.

“It’ll be interesting to see how that competition is amongst all those players.”