Sydney FC PS4 NPL 2 front man Charles Lokolingoy longs for the big stage, and on Saturday he’ll get that chance as he contests the NPL 2 Grand Final in the Sydney Derby at Leichhardt Oval.

Lokolingoy has struck three times against the Wanderers in their two previous encounters this year, but admits a goal against the Sky Blues’ cross town rivals in the decider would trump all that he’s scored previously.

“I’m very excited for the Grand Final, I love playing on the big stage, I love the big occasions,” Lokolingoy said.

“There’s nothing to worry about, I’m just going to go out like every other game. I don’t really worry about the opposition, I just play every game the same.

“It would mean a lot to score in the Grand Final against the Wanderers because this time it would count to winning [silverware].

“It means a lot [every time I score] but it would feel much better than the goals I scored in the normal season if I got a goal in the Grand Final.

“I hope we have a really good crowd come out and support us,” he continued.

“The Cove have been amazing throughout the season, they did really well to push us and I hope we deliver [for them].” 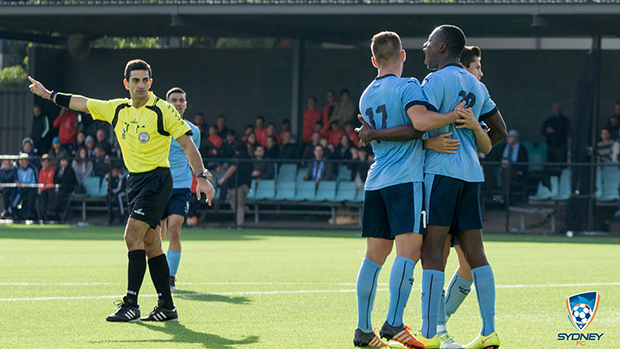 Lokolingoy ended the inaugural NPL season for Sydney FC as the league’s Golden Boot and he said this 2016 season was exactly what he expected after making the move from the Foxtel National Youth League.

“I was very happy to take out the Golden Boot award,” he said.

“I felt like I performed well all season and I’m very happy to have scored all those goals. All the credit has to go to the boys behind me [though], they set me up for everything.

“A lot of the boys are right behind me [every match] and keep pushing me to score the goals so I’m grateful for their support.

“All the defenders in the league now know what I’m going to do, what I’m all about, so it’s been getting tougher [to score] but I’m really happy.

“To be honest this was the sort of season I was expecting,” he continued.

“I had high expectations on what I have to do, I usually set my standards really high. I wanted to be top scorer, I like being on top and I’m really happy about it.”