When he’s not busy making tackles in defence, Sydney FC youngster Alex Gersbach is busy tackling the books as he begins his degree at Macquarie University this year.

Studying and competing in a professional sport is never easy, however Gersbach was lucky enough to obtain a Macquarie University Sports Scholarship and the 17 year old left sided defender praised the initiative as he looks to forge a career outside of football.

“The cost of university is quite expensive and any help is worthwhile,” Gersbach said.

“I’m on a sport scholarship through Macquarie University, they award it in different categories and I was lucky enough to get one.

“While being on this scholarship they help you out with fees and other things,” he continued.

“It’s really good to know you’re getting that support through Sydney FC and Macquarie Uni through people like Glen Warwick.

“These people are all there to support me and the support is something that will hopefully help me to succeed in my career.” 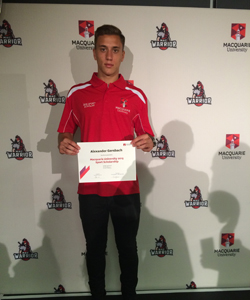 Gersbach said that while juggling his fledgling football career and his education is tough, he’s hopeful of one day becoming a sports journalist working in the media industry.

“I’m studying a Bachelor of Arts, majoring in Media, Culture and Communitcation,” he said.

“I would like to get a path into sports journalism or something similar. That sort of media stuff interests me.

“At the moment I’m only doing part time at university and maybe next semester I can pick up a few more subjects. I’m confident I should be alright though with all the support around me.”

Sydney FC travel to New Zealand to face the first placed Wellington Phoenix as the race for finals football hots up (kick off 5pm). Catch the match live on Fox Sports 4 or follow @SydneyFC on Twitter for LIVE match updates.