Sydney FC suffered their first defeat in 15 games as a solitary goal for Melbourne City snatched the FFA Cup trophy in a close game at Melbourne’s AAMI Park.

Sydney FC suffered their first defeat in 15 games as a solitary goal for Melbourne City snatched the FFA Cup trophy in a close game at Melbourne’s AAMI Park.

Tim Cahill’s 53rd minute header split the two sides with Sydney FC going close through Alex Brosque and Bobô who had a header cleared off the line.

Brosque was later felled on his way into the penalty box as he headed towards goal in the final minutes, but claims of a foul were controversially waved away by referee Peter Green.

The match also had a fiery start with a shocking looking Luke Brattan tackle on Michael Zullo awarded a yellow card.

The Sky Blues head to Newcastle on Sunday with a four-point buffer at the top of the Hyundai A-League. 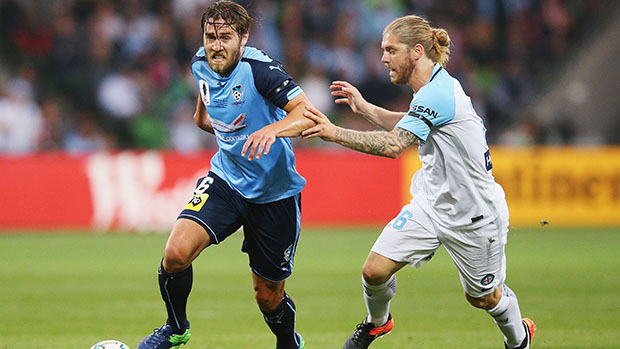 Graham Arnold: “I think there was nothing between the two teams. It was a physical, stop start game and I don’t think there was any difference between the two teams. In general play it was an even contest but you have to congratulate Melbourne City on winning their first trophy. That’s our first loss in 15 games, we’ve got Newcastle on Sunday, I’ll pick the boys up and we’ll go up there and pick up the three points. I thought Sebastian Ryall did exceptionally today, it shows the depth of the squad we’ve got, he stepped in and did a real good job for us.” 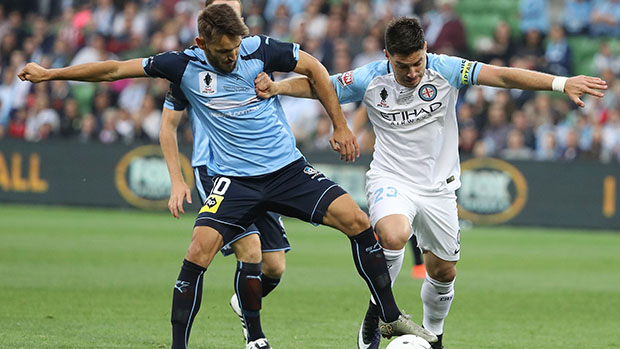 53’ CAHILL GOAL – A short corner is floated to the back post where Cahill rises and heads beyond Vukovic.

3’ BRATTAN TACKLE – A lunging high tackle by Brattan on Zullo engrages the Sky Blues bench and a melee ensues involving a number of players.  Brattan is booked for the challenge and calm is restored.

10’ GRANT CHANCE – Lovely exchange between Holosko and Grant sends the latter on goal but his cut back is stopped by the City defence.

14’ CAHILL HEADER – City free-kick from the right hand side is in-swinging to Cahill who meets the ball but heads wide.

25’ BRANDAN CHANCE – Fornaroli crosses across the face of goal but Brandan puts over.

52’ BROSQUE CHANCE – Brillante heads the ball back into the box where Brosque brings it down on his left foot and shoots but Bouzanis is down low to save it.

62’ HOLOSKO CROSS – Holosko gets clear down the right and flashes a ball across the six yard box narrowly missing a couple of Sky Blue heads.

71’ BOBÔ HEADER OFF THE LINE – Simon gets clear on the right and crosses to Bobô who heads goalwards but it’s cleared off the line by Jakobson.

90’+2’ BROSQUE PULLED DOWN – Alex Brosque receives a ball through middle and appears to be pulled down in a goal-scoring opportunity by Malik as he heads into the penalty area.  Claims of a foul are waved away by referee Peter Green. 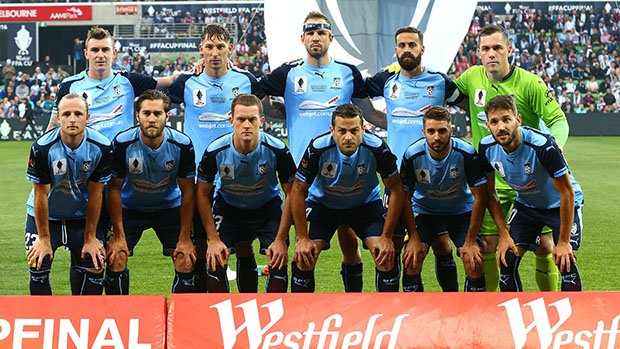 Head Coach Graham Arnold brought skipper Alex Brosque back into the starting line-up in place of David Carney who moved to the bench.  Alex Wilkinson, who has been suffering from diarrhea and sickness for the past 48 hours moved to the bench with Seb Ryall moving into centre back.  Foxtel National Youth League keeper Mitch Evans replaced the cup tied Chris Oldfield on the bench.