Late drama in the Foxtel National Youth League 2017 Grand Final has seen a gallant Sky Blues side finish as runners up against a spirited Melbourne City at Central Coast Stadium on Saturday.

Late drama in the Foxtel National Youth League 2017 Grand Final has seen a gallant Sky Blues side finish as runners up against a spirited Melbourne City at Central Coast Stadium on Saturday.

The Sky Blues battled back from a 1-0 half time deficit to stamp their authority on the match beyond the hour mark, as an own goal Ruon Tongyik and a sublime strike to Charles Lokolingoy had the Sky Blues in the driving seat with time ticking down.

With under 10 minutes to play City found a lifeline through a Daniel Arzani penalty, and with the clock showing 98 minutes played the title was won with Braedyn Crowley firing home from 12 yards with the last kick of the match after Liam McGing was adjudged to have handled the ball in the area.

The Sky Blues now turn their attention to the PlayStation 4 NPL 1 NSW Men’s competition, with their first match of the 2017 season coming against Rockdale City Suns on Saturday 11 March at Lambert Park, Leichhardt (kick off 7pm). 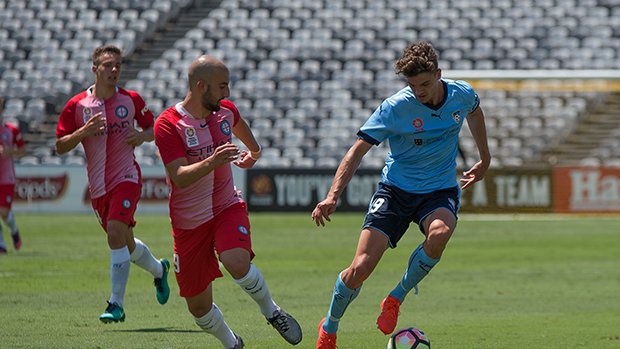 Rob Stanton: “First half we weren’t really in the game, we didn’t deal with the conditions well. We addressed the issues at half time, changed the attitude and mentality and approached the game in the same way City did. We got back on top in the second half, we could have won it, but that’s football. We made the right changes when we did but in the end it wasn’t to be.”

22’ CROWLEY GOAL – Daniel Arzani breaks down the right hand side before slipping a ball in behind the Sky Blues defence for Braedyn Crowley to tap home.

58’ TONGYIK OWN GOAL – A Sky Blues free kick on the left flank is curled in to the area and it bounces off the turf into Tongyik and into the net for the equaliser.

68’ LOKOLINGOY GOAL – A forward ball from the Sky Blues falls in the path of Charles Lokolingoy in the box, who shrugs off his marker before turning and curling an effort into the far top corner.

81’ ARZANI PENALTY – Daniel Arzani converts the Melbourne City penalty, firing low into the net underneath a diving Evans in goals.

90+10’ CROWLEY PENALTY – Braedyn Crowley steps up to win the match for City, firing in his penalty into the bottom corner off Evans’ hands with the last kick of the match. 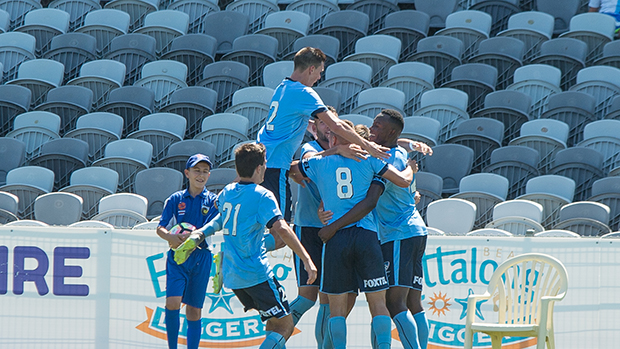 7’ BLACKWOOD CHANCE – A great ball from midfield releases Blackwood who takes on the City keeper who gets down low at the striker’s feet to save.

8’ ARZANI SHOT – Daniel Arzani cuts in from the right hand side before unleashing an effort just beyond the far post from inside the area.

36’ CROWLEY HITS THE POST – Braedyn Crowley is found by a City cutback however he can only hook the effort into the woodwork.

42’ FLOTTMANN HITS CROSSBAR – Intervening to deny a City cross, Patrick Flottmann heads the ball into his own bar and out for a corner.

45+1’ AHMED CHANCE – City break in number and a cutback to the far post finds Yusuf Ahmed, but the forward can only direct his effort into the post and out when well placed.

71’ MUTCH SHOT – William Mutch is played in behind the City defence into the area and he fires at goal on the angle but it’s saved well.

76’ PIERIAS SHOT – Dylan Pierias pounces on a loose ball in the Sky Blues box at fires low at goal but Evans is equal to it to make the save.

80’ MELBOURNE WIN A PENALTY – Following a fine save from Evans to deny Pierias, the bouncing ball is handled by Agamemnonos in the area, with the referee awarding City a penalty.

89’ MUTCH CHANCE – Cristian Gonzalez takes it to the byline and crosses to the back post finding Mutch, but he directs his header straight at the keeper and it’s saved.

90+3’ METCALFE CHANCE – A City corner is curled towards the penalty spot and Connor Metcalfe rises highest to meet it but he heads it over the bar.

90+3’ LOKOLINGOY CHANCE – The Sky Blues break forward off a goalkick and Lokolingoy gets himself in behind the City defence and curls his effort low just beyond the far post.

90+6’ CROWLEY HITS THE BAR – A Melbourne City cross isn’t cleared by the Sky Blues defence and Braedyn Crowley volleys the bouncing ball at goal at the far post but rattles the crossbar.

90+8’ MCGING HANDBALL – A City corner is whipped in and in a melee of bodies the ball strikes Liam McGing’s hand with City winning a penalty.

Head Coach Rob Stanton was without the suspended Nicola Kuleski for the Final as Chris Zuvela donned the captain’s armband in his place. George Blackwood earned starting berth upfront, while Bai Antoniou was recalled to the starting 11 after starring off the bench in the previous round. It was an otherwise settled Sky Blues squad with plenty of finals experience, with Daniel Maskin the only absentee from that squad that played in the final round of the regular season.