A brave ten man Sydney FC has been knocked out of the AFC Champions League in the cruellest of manners.

A brave ten man Sydney FC has been knocked out of the AFC Champions League in the cruellest of manners.

A last minute wonder strike from Shandong Luneng midfielder Junmin put the visiting Chinese outfit through to the quarter finals on the away goals rule after the aggregate score finished 3-3 at the end of 180 minutes.

Sydney FC had taken an early lead from a Brandon O’Neill free kick in the 2nd minute before Argentine Montillo equalised for Shandong with a sweet shot ten minutes later.

Rhyan Grant restored the Sky Blues advantage with a superb right foot shot just after the break before Arnold’s men were reduced to ten men when Zac Anderson was adjudged to have fouled Yang Xu as he turned to shoot on goal in the box.  Anderson was sent off but from the resultant penalty Janjetovic made a superb save from Tardelli, his third penalty save against Chinese opposition in the competition.

The ten men of Sydney FC fought to the bitter end and absorbed a lot of opposition pressure, however were unable to withstand the remaining minutes and Luneng struck to send the Sky Blues out. 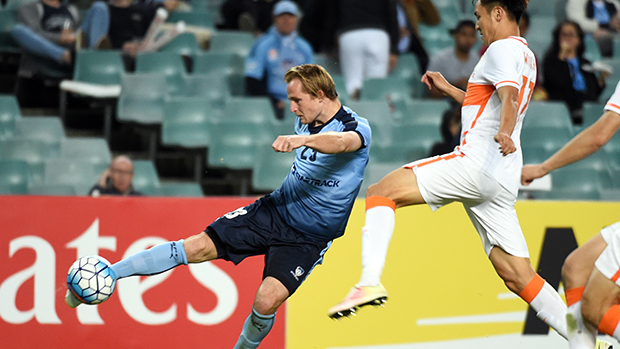 Graham Arnold: “The boys were fantastic, I thought we played exceptionally well tonight.   You can see the difference of two high quality players in Tardelli and Montillo, every time they got on the ball they were dangerous.

“I can’t be prouder of my boys, they gave everything they’ve got. It took a bomb of a goal like that to clinch the game for them, but at the end of the day it’s disappointing to go out on away goals.

“It was a wonderful goal that beat us. I can’t be prouder of what we’ve done, we topped the ‘Group of Death’, we pushed Guangzhou Evergrande the biggest club in Asia out and we got top. We’ve just drawn twice with one of the biggest clubs in Asia, we didn’t lose, and that’s the hard thing to take is the away goals.”

2’ O’NEILL GOAL – O’Neill swings in a right footed cross from a free-kick on the left hand side of the penalty area.  It evades everybody in the box, hits the far post and bounces into the net.

12’ MONTILLO GOAL – Tardelli is set free down the left hand Shandong flight and plays a ball back inside to the unmarked Montillo who hits a first time left foot strike into the bottom corner.

46’ GRANT GOAL – Ninkovic feeds Grant overlapping on the right and he hits a first time right foot shot low, across the keeper and into the bottom corner right hand corner of the Chinese net.

90’ JUNMIN GOAL – The midfielder picks up the ball in midfielder and strikes the ball from 30 yards swerving into the top corner to break Sydney FC hearts. 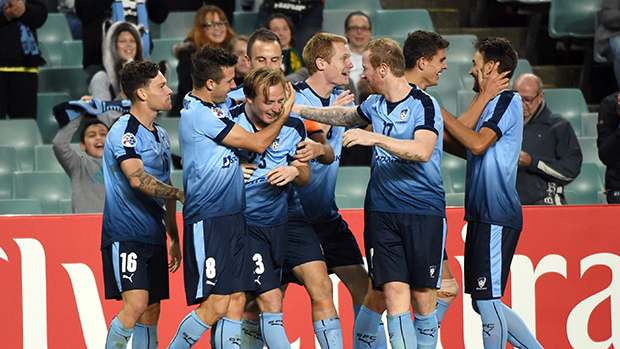 34’ JANJETOVIC SAVE – Montillo plays Tardelli into space behind the Sky Blues right back position after Rhyan Grant pushed forward and the Brazil international bears straight towards goal producing a goal bound shot which Janjetovic gets a stretched out foot to.

53’ JANJETOVIC SAVE – A right foot Montillo cross to the far post finds the free head of Jucilei but Janjetovic pulls off a fantastic one handed save as the Brazilian heads back across goal.

55’ BINBIN HEADER WIDE – A cross pulled back from the left hand Shandong wing finds the head of Binbin who flicks it just wide of the post.

76’ ANDERSON SENT OFF – A cross into the box falls to Yang Xu. He turns to shoot under pressure from Anderson who has his arms wrapped around the striker who falls to the ground and the referee awards a penalty as his shot is cleared off the line.

77’ JANJETOVIC SAVES PENALTY – Tardelli steps up to take the spot kick and puts it to Vedran’s right but the keeper guesses right and saves and watches as Tardelli hits the rebound onto the bar and over. 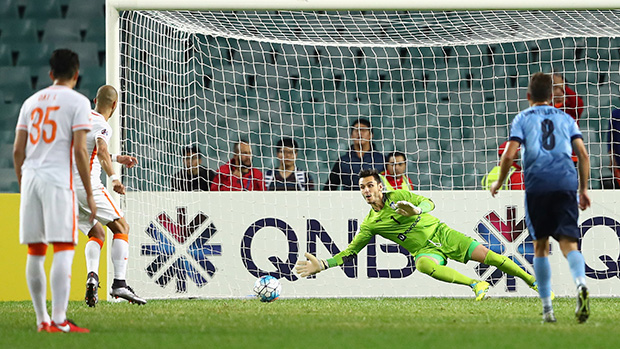 83’ TARDELLI OVER THE BAR – A cross from the right hand Shandong wing falls to Tardelli on the volley and he puts it over the bar.

Sydney FC Head Coach Graham Arnold kept the same team who played out a 1-1 draw in Shandong a week earlier.