Sydney FC sit five points clear at the top of the Hyundai A-League with a fifth consecutive league win, and a ninth in all competitions, after defeating Melbourne Victory 2-1 in front of close to 20,000 fans at Allianz Stadium.

Sydney FC sit five points clear at the top of the Hyundai A-League with a fifth consecutive league win, and a ninth in all competitions, after defeating Melbourne Victory 2-1 in front of close to 20,000 fans at Allianz Stadium.

Sky Blues substitute David Carney made the difference scoring twice following his second half introduction, after Mitch Austin had given the visitors a half time 1-0 lead.

The victory maintains the Sky Blues’ 100 per cent record in all competitions with Sunday’s home match against Perth Glory a chance to equal the club’s record of ten consecutive wins. 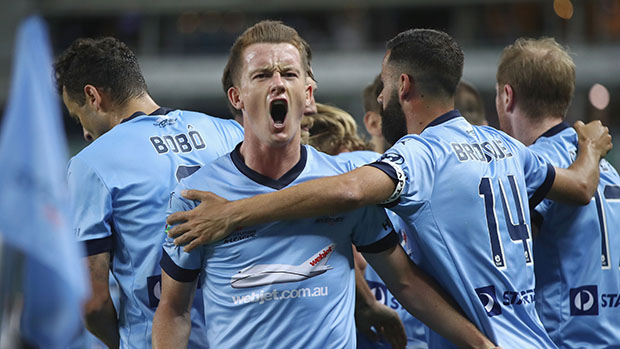 Graham Arnold: “It was a fantastic comeback.  I felt that in the second half we did exceptionally well, played very well and it was probably one of the best victories we’ve had since I’ve been at the club.

“Every week I have to leave players out, Dave was sick last week but this week he trained very well and I had to make the decision [to leave him on the bench] and it shows the togetherness in this group of players that he accepted that no problems at all.

“That’s the perfect thing with this team, we’ve got great team morale, they’re fighting for each other. I wanted to get Carney high and wide, 1 v 1 that’s his strength, some may question why the right hand side but I wanted him to cut inside onto his left foot to create havoc and he did.”

David Carney: “Brosquey went down the line and he found me great, I don’t know how he had the vision, and I just thought the defender was going to head it so I fell back, but he didn’t [head the ball] and it was only late that I brought it down and I was just happy it found the corner.

“The second one, I played Rhyan Grant and I don’t think he expected for me to play it to him but he showed great vision, and he does it often, to cut back and I knew he had it in his locker and again I’m happy it went in. I thought since we got the equaliser we deserved to win because we had more hunger than them.

“I want to win things, I’ve had a taste of it before, I want to win the trophy and we’ve got the team and everything about this club to do that. It’s only early days but I think we’ve got something special with this team.” 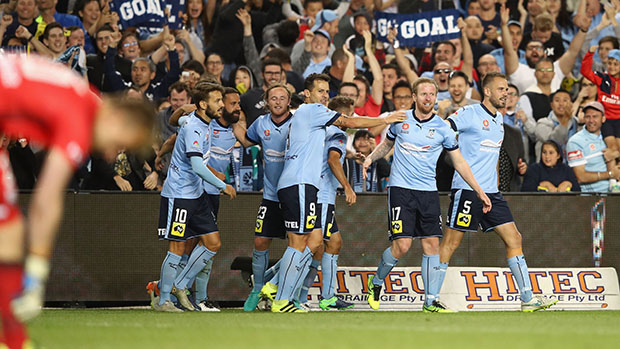 41’ AUSTIN GOAL – Rojas capitalises on a ball over the top and cuts it back to Austin to finish.

63’ CARNEY GOAL – Brosque reaches the byline and lofts a cross to the back of the box where Carney brings the ball down and slots the ball home with his left foot.

78’ CARNEY GOAL – Grant wins the ball on the right gives it to Carney who returns it to him inside the box.  Grant then cuts it back to the former Socceroo to hit a sweet left foot shot beyond Thomas.

8’ BERISHA GOAL DISALLOWED – Austin crosses from the left to Berisha who deflected the ball into the net over Vukovic but he is rightly flagged for offside.

13’ ROJAS MISS – Berisha is released down the left hand side and crosses to an unmarked Rojas who inexplicably shoots past the post when it seemed easier to score.

26’ BERISHA MISSES PENALTY – Holosko is adjudged to have brought down Berisha in the penalty box from a Melbourne free-kick and when the Albanian picks himself up, he blazes the penalty over the bar.

45′ NINKOVIC SHOT – Thomas spills a curling Sky Blues free kick and Ninkovic curls over from the edge of the area.

54’ JURMAN HEADER – Brillante crosses from a short corner to the back post where Jurman gets his head on the ball but it goes over.

60’ GRANT OFF THE LINE – A corner comes over from the Melbourne right which is headed towards goal in a scramble but Grant is there to clear off the line.

64’ CARNEY FREE KICK – Carney hits a left footed curling free kick which is headed for the top corner until Thomas dives to finger-tip the ball away.

74’ VUKOVIC SAVE – Austin crosses from the left and Wilkinson deflects towards goal where Vukovic saves.

75’ GRANT LAST DITCH CLEARANCE – A Rojas ball from the right hand side is directed towards Austin at the back post before Rhyan Grant makes a last ditch clearance.

82’ BROSQUE VOLLEYS WIDE – Ninkovic reaches the byline and chips the ball to the back of the box where Brosque volleys wide.

Head Coach Graham Arnold kept the same line up to the one which started against Newcastle Jets seven days earlier. 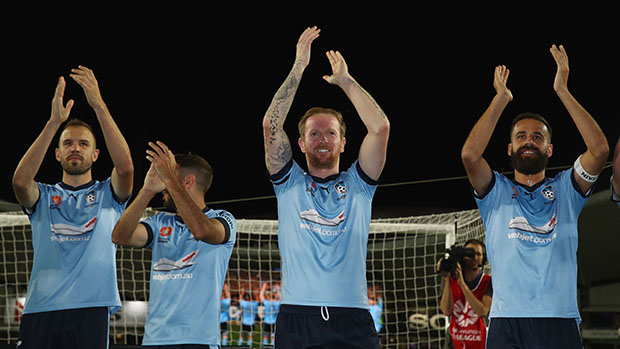