He may have slotted a set piece against Earlwood, however towering striker Matt Simon has quashed the idea of becoming a regular free kick taker for the Sky Blues.

Reflecting on Sydney FC’s pre-season to date, Simon said there were valuable minutes already in the legs and he’s eyeing further game time against Macarthur Rams tonight at Campbelltown Stadium (kick off 7:30pm).

“It was nice to get on the score sheet but I don’t think I’ll be the regular free kick taker,” Simon said.

“It was nice to grab one at the end there and it was a good result from the boys with good professionalism shown. We’ll be looking to replicate that all throughout the season now.

“This time of year is all about getting kilometres in the legs and staying injury free and having a good hit out to take that next step in the process to the season kicking off.

“Arsenal was a great experience, huge crowd and came pretty early in our preparation and the Earlwood game the boys had a good hit out there and it was another step forward in what we want to do in our preseason,” Simon continued.

“The boys are looking forward to Macarthur tonight and another step forward in what we want to do.” 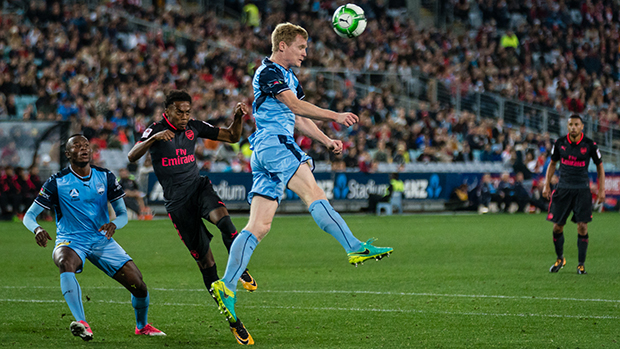 Two years on from his Sky Blues debut at the same venue against the same opposition, Simon returns to Campbelltown Stadium tonight eager to get the Hyundai A-League Premiers and Champions to where they want to be ahead of October’s season opener.

“It’s always a great occasion playing Macarthur, the two clubs have a great relationship, it’ll be good to head out there again and play.

“We’ll be looking to work on things that we’ve been doing in training, to start getting the combinations back together.

“I’m feeling good, the boys are looking sharp in training, we’re obviously doing a lot of hard work at the moment as it’s very early on in the season, and we’re just looking forward to some games coming up.”