Eyes On The Prize For Brosque

The Sky Blues have to juggle the cup clash and a Hyundai A-League trip to Wellington in the space of a week, however Brosque said Head Coach Graham Arnold has ensured the squad are in the right mind-frame and aren’t dwelling on their consecutive 4-0 league wins.

“Everything that we play for we want to win and that’s the way it should be,” Brosque said.

“Sydney FC has to be a club that goes into every competition wanting to win it and I think the players have really embraced that this year. The players know what’s expected of this club.

“It’s been a great start to the season but Arnie has pulled all our heads in, he doesn’t want us to get carried away with it. We know there’s a lot of improvement in us.

“Wednesday is a good opportunity for us to give everything we have for this game and get into a cup final which would be the first time the club has done it,” he continued.

“We’re ready, we want to win this competition, and we’ll be doing everything we can to win it.

“We’ll do a lot of homework on Canberra, they’ve been great, they haven’t conceded a goal in the whole tournament so they’re obviously defensively good and we’ll have to work out a way to break them down.” 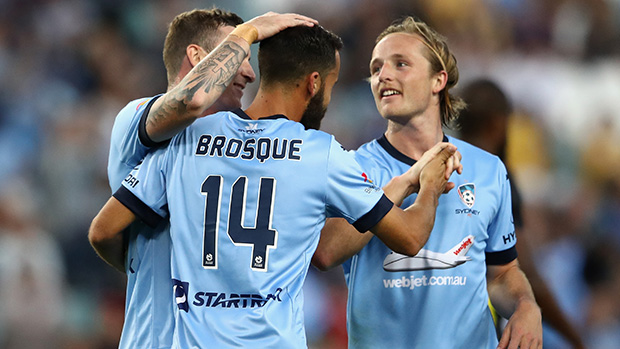 Brosque attributed the Sky Blues’ early run of form to the offseason recruitment, and while the squad’s goal is to carry that form across the whole campaign, Brosque is focussed on ensuring his body is right for the entire season.

“The quality of the players and the depth that we’ve got is what’s behind our early season success at the moment,” Brosque said.

“I definitely think we’ve got a lot of strength all over the park. We’ve got Josh Brillante, Michael Zullo, [Alex] Wilkinson, [Danny] Vukovic, Bobô, half our team that’s been starting our games are new players so I think the quality of the players we’ve brought in have been a huge difference.

“The coaching staff have done a great job to get us right for the start of the season, we’re scoring goals, creating chances and it’s about keeping that run going now.

“For me it’s still about looking after the hamstring, making sure I last all 27 games of the season,” he continued.

“I think the team is doing fantastic. Carney, Ninkovic, Holosko, Bobô, they’re playing excellent, so there’s no reason to change and at the moment I’m happy to play whatever part I can.”