Dream Comeback For Abbas As Sydney FC Down Jets

The left winger, who has spent the last 14 months on the sideline recovering from an anterior cruciate ligament injury, latched onto a Matt Simon’s back heel in the 79th minute to bury the Sky Blues second goal and secure the three points.

Earlier Filip Holosko had given Sydney FC the lead as he ran onto a Milos Ninkovic chip to beat Birighitti with a neat finish.

The win left Sydney FC clear in third place at the end of the game. 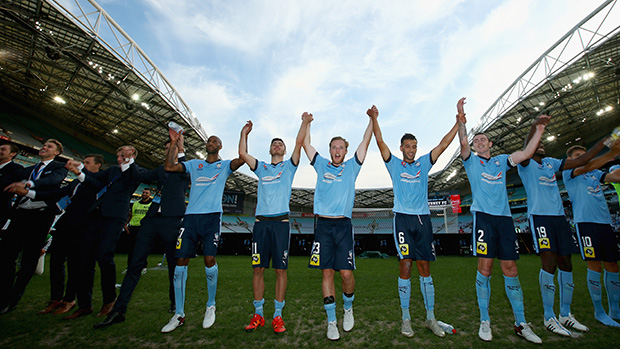 Graham Arnold: “I don’t think it could have been scripted any better, it’s a day about Ali Abbas, let the headlines be about him, let the stories be about Ali. I didn’t think he’d come back, but the amount of work and effort he’s put in, not probably having a day off in the 13 months he’s had the injury, it’s a great story the way it’s panned out for him today.

“He’s worked extremely hard, he’s a wonderful kid, he’s passionate and that’s what we need in this team. On Monday I know he’ll be saying ‘coach, I want the Wanderers’.

“That’s what his aim has been for the last 13 months, he’s put the date in the dressing room.

“I was happy with the performance, it’s a good lead in for the Wanderers next week. To get a couple of goals and a clean sheet is also good and there’s a lot of promising things.”

Ali Abbas: “I’m feeling so happy and I couldn’t think that I was going to score today but I’ve done it and I’m so happy and I promise the fans that more will come.” 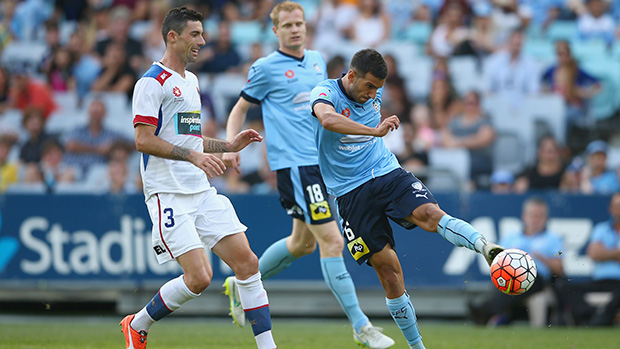 14’ HOLOSKO GOAL – Ninkovic lobs a ball beyond the Newcastle Jets back four for Holosko to run onto.  The Slovakian controls with his head before putting a right foot shot beyond Birighitti.

79’ ABBAS GOAL – Abbas played the ball into Matt Simon who produces a backheel to play Abbas clear on goal and the Iraqi caps his return with a sidefooted finish. 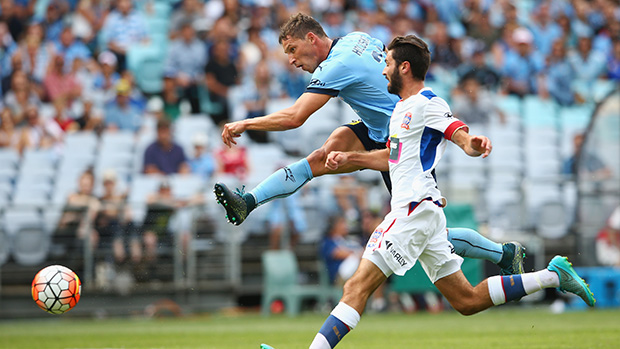 25’ BLACKWOOD CHANCE – Holosko plays a ball inside the full back to Blackwood. The striker brings the ball onto his left foot with a clever backheel flick and places a shot an inch the wrong side of the post.

42’ TRIFUNOVIC CHANCE – Carney is released on the left hand side, gets to the byline and pulls the ball back to Trifunovic who hits a left foot shot just past the upright.

60’ BLACKWOOD CHANCE – Holosko dispossesses a Jets defender on the right edge of the box and the ball falls to Blackwood who tries to turn inside Hoffman before taking a shot but is tackled.

70’ ABBAS RETURNS – Ali Abbas comes on as a substitute for Filip Holosko after nearly 14 months out with injury.

73’ TRIFUNOVIC HEADER WIDE – A Carney corner is headed at the near post by Trifunovic and it goes just wide past Janjetovic’s left hand post.

77’ ABBAS SHOT BLOCKED – Abbas drives at the Jets defence on the left hand side, producing a number of step overs before unleashing a right foot shot which is blocked.

Head Coach Graham Arnold was forced to make three changes with Brandon O’Neill, Alex Gersbach and Andrew Hoole away on international duty.  Jacques Faty returned to the heart of the defence in place of Gersbach with Seb Ryall moving to right back and Rhyan Grant to left back.  Milos Dimitrijevic came in for O’Neill in central midfield while Christopher Naumoff came in on the left wing.  Ali Abbas returned to the bench for the first time in nearly 14 months while Matt Simon also returned from suspension.