Sydney FC had a goal disallowed and created a hatful of chances but couldn’t secure the vital strike which would have given them all three points against Newcastle Jets at WIN Stadium.

A crowd of well over 11,000 fans created a fantastic atmosphere in Wollongong and watched on as Ibini, Janko, Brosque and Triantis all forced the Jets keeper Ben Kennedy into a series of fine saves.

Janko had the ball in the back of the net just after the half hour mark with a spectacular volley, which would have been a contender for goal of the season.  However referee Lucien Laverdure, and his assistant controversially ruled the goal offside and the match ended all square. 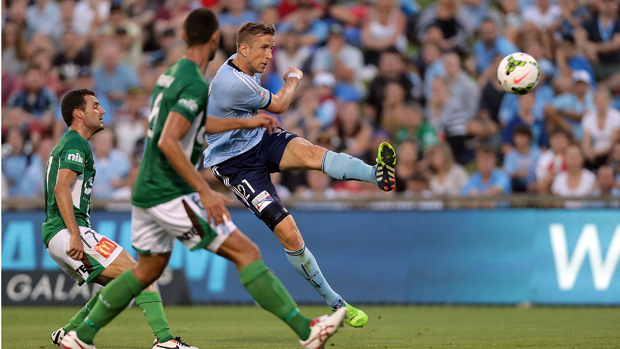 “Second half we had the chance, I think they only had one chance. It was something like 34 entries into their penalty box to their seven so I just said to the boys at the end of the day it was a good effort.  The performance was better, probably our best 90 minute performance, but we’ve got to become more ruthless in front of goal and kill teams off.

“It’s fourteen games and we’ve only lost three in fourteen but the mentality of the players is getting better.  I am so determined to take this club to the top and change the culture and make it the biggest club in the country.”

5’ IBINI HEADER – Brosque gets to the byline on the left hand side of the penalty area and chips a ball to the back post where Ibini guides a downward header just past the keeper’s right hand post.

18’ BROSQUE & TRIANTIS SHOTS – Spaces opens up on the left hand side of the Sydney FC attack where Grant finds Brosque who goes clear on goal to shoot with his left foot but Kennedy blocks the effort with his feet.

The ball eventually falls to Triantis who drills a shot from 25 yards towards goal, it’s deflected and Kennedy dives full stretch to push it clear.

22’ JANKO HITS POST – Grant puts Janko in the clear with a slide rule ball and the striker fires in a shot which beats the keeper and cannons off the post and out. 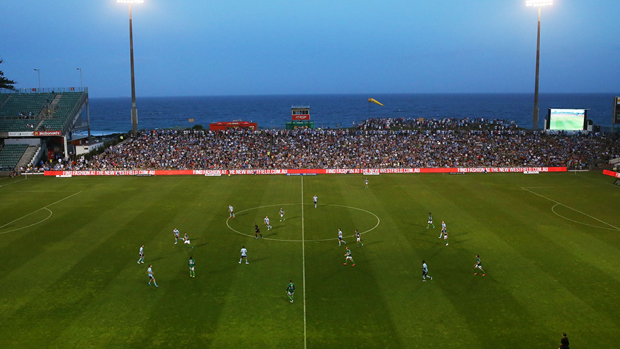 31’ JANKO GOES CLOSE – Welsh slips at right back when attempting to clear the ball allowing Calver to run clear to the byline. The young Sky Blues defender looks up and pulls the ball back to an unmarked Janko in the bo but the ball is just too far in front of him with the goal gaping.

32’ JANKO GOAL OFFSIDE – Right back Aaron Calver floats a perfect ball to the far post where Janko produces a magnificent volley from the edge of the penalty area which finds the back of the net.  However the linesman had raised his flag.  Fans boos rang out in frustration having seen the replay on the big screen.

50’ JANJETOVIC SAVE – A cross from the Jets right wing finds the head of Virgili who puts the ball back across goal but Janjetovic gets his finger tips to push it wide.  As the ball is chipped back across the goal Jeronimo arrives at the far post but somehow puts his header wide.

55’ BROSQUE CLEARS OFF THE LINE – Jets attack down the right wing and Carney hits a cross which Janjetovic goes to catch but spills.  Madaschi heads the loose ball goalwards but Brosque is there to clear off the line.

80’ IBINI SHOT SAVED – The ball falls to Ibini inside the right hand edge of the box and the striker curls a low left footed shot into the far corner which Kennedy is down superbly to tip round the post.

Sydney FC Head Coach made one change to the side that battled in the blistering heat against Brisbane Roar at Suncorp Stadium four days earlier.  Marc Janko returned to the attack in place of Shane Smeltz who was left out as a precaution while George Blackwood came onto the bench with Pedj Bojic returning in place of George Timotheou.