Sydney FC have secured a place in the Hyundai A-League 2015 Grand Final with a dominant win over Adelaide United at Allianz Stadium on Saturday.

Sydney FC have set up a mouth-watering Hyundai A-League 2015 Grand Final against Melbourne Victory after dominant 4-1 win over Adelaide United in the semi-final at Allianz Stadium.

A brace to captain Alex Brosque, coupled with sublime strikes to Bernie Ibini and Christopher Naumoff, cancelled out Craig Goodwin’s late goal to seal progression to the showpiece event to be held at AAMI Park next Sunday.

Graham Arnold:  “You have to give credit to Adelaide. Josep changed the system at half time and put on an extra attacking player and they were getting 2 v 1’s out wide and finding spaces. I also give a lot of credit to our back four, I thought they handled a lot of it very well and overall it was a good performance.

“Eugene Galekovic didn’t perform like six weeks ago, instead of hitting him this time we missed him and the balls found the back of the net. Some of our play was very good, it was what we worked on. I thought the first half we were exceptional, it was a good attacking performance, second half they changed the system and put more pressure on us but the difference this time was what we scored goals and last time we didn’t.

“He’s a great kid [Naumoff], the good thing about Kiki is that he’s getting more belief in himself, he’s a shy kid but he doesn’t look it after putting it in on the pitch in front of 30,000. He was outstanding tonight and it was just a matter of believing in himself. I couldn’t be prouder of what we’ve done, but we’ve won nothing. Monday we’re back in at work and we’ve got a hell of a challenge ahead of us going to AAMI.

18’ IBINI GOAL – Petkovic clips the ball forward to Naumoff on the left, he beats his man and gets to the byline before cutting the ball back to Ibini on the edge of the box to lash home into the roof of the net.

45’ BROSQUE GOAL – Dimitrijevic feeds Ibini on the right hand side who crosses behind the defence to Brosque who flicks the ball with a back-heels inside Galekovic’s near post.

46’ BROSQUE GOAL – Naumoff pokes the ball through to Janko in the box who takes on his man but is tackled and ball falls to Brosque who slots it home with his left foot.

73’ GOODWIN GOAL – Craig Goodwin receives the ball just inside his half and on the counter attack races towards goal to shoot under the body of Janjetovic as the ball creeps under the keeper’s body.

90’ NAUMOFF GOAL – Terry Antonis plays Christopher Naumoff clear inside the penalty area and the youngster keeps his head to lift the ball over Galekovic. 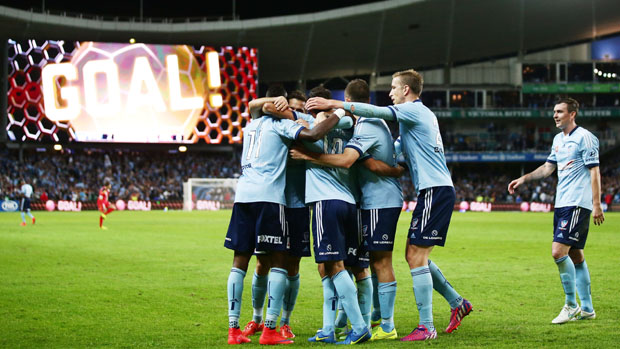 7’ NAUMOFF SHOT – Christopher Naumoff receives the ball in the centre circle, turns and runs at the Adelaide United defence, beating three men before curling a left foot shot just wide of the post.

14’ JANKO GOAL DISALLOWED – The ball is nudged through to Janko in the box and the Austrian appears to be clean through until Elrich cuts across his path and go sprawling.  Janko manages to poke the ball off the defender and into the net but he is called back for offside.

20’ IBINI SHOT BLOCKED – A long pass is headed down by Brosque into the path of Ibini who hits the bouncing ball first time and on target from 20 yards but it hits the knee of an Adelaide defender and goes out for a corner which comes to nothing.

24’ BRILLIANT SAVE JANJETOVIC – Jeggo plays a defence splitting pass to Cirio who bears down on goal but Janjetovic dives the right way to smother his shot.

30’ SANCHEZ HITS THE BAR – A free kick to Adelaide United on the edge of the box is floated over the wall and hits the top of the bar and goes over.

43’ GREAT SAVE JANJETOVIC – Isaias fires a long range effort from the edge of the box and Janjetovic dives full length to his left to palm the ball away.

57’ CARRUSCA FIRES WIDE – Mabil makes room on the Adelaide left and passes inside to the unmarked Carrusca who turns and puts a left foot effort just wide of the post.

58’ JANKO SHOT SAVED – Naumoff finds himself in acres of space on the right hand flank and slides the ball into Janko who’s first time shot is brilliantly saved by Galekovic.

79’ BOOGAARD HEADER – A cross field ball finds the head of Nigel Boogaard who flicks a header back across goal for the ball to hit the base of the post and go wide.

Sky Blues Head Coach Graham Arnold made two changes to the starting line up that beat Wellington Phoenix 2-1 in the final regular game of the season.  Marquee man Marc Janko returned from injury at the expense of Shane Smeltz who moved to the bench, while Seb Ryall came in at right back for Rhyan Grant who moved to the bench.  Terry Antonis returned to the bench for the first time in almost two months.