A late goal and red card ensured a youthful Sydney FC side were knocked out of the FFA Cup in cruel fashion, in a 2-1 extra time loss away to Adelaide United despite dominating large parts of the game.

Graham Arnold fielded a young Sky Blues side and they took an early lead with a stunning 30 yard strike from Rhyan Grant who left Galekovic stranded.

That lead was pegged back before the break by the full strength Adelaide United team, with Sanchez capitalising on a good run and cross from Cirio.

Sydney FC’s youngsters enjoyed most of the second half possession, dominating the home side for long periods but were dealt a sucker punch five minutes from the end of extra time, when a remarkable bit of skill from Carrusca set up Dylan McGowan for the winner.

McGowan was sent off two minutes later for pulling down Sebastian Ryall who had a clear run on goal and a goal-scoring opportunity which effectively won the game for Adelaide United.

Matt Simon:  “He [McGowan] was last man so it’s always a red card and unfortunately we couldn’t capitalise on the opportunity.

“Both teams are great teams and both teams want to play great football so they are always close games and I think it was quite entertaining for the fans tonight.

“It’s very early in pre-season and there’s still a long way to go until the start of the season and I thought the boys did really well so there are good things to come.”

16’ GRANT GOAL – Grant receives the ball from Smeltz around 30 yards from goal.  The central midfielder looks up, sees Galekovic just off his line and drills the ball over the top of the Socceroos goalkeeper to open the scoring. 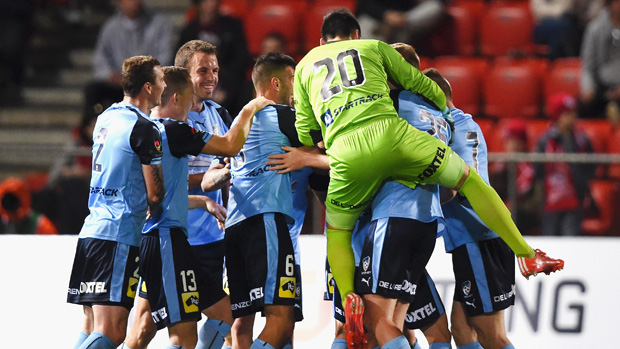 40’ SANCHEZ GOAL – Cirio uses his pace to get down the left wing and get to the byline.  He pokes a low cross into Sanchez who collects with one touch and turn and shoot into the net despite Woodcock’s attempt at a goal-line block.

114’ MCGOWAN GOAL – Carrusca receives the ball on the edge of the box and produced a rabona flick over the Sydney defence which Janjetovic and Babalj both went for and missed, leaving McGowan to slot home into an empty net.

12’ JANJETOVIC SAVE – Carrusca beats Woodcock to the ball inside the box and bears down on goal to shoot from an acute angle but Janjetovic is alert to push behind for a corner which comes to nothing.

35’ CIRIO HITS POST – Quick feet from Cirio gets him clear of the Sydney FC defence and the striker tries to curl the ball around Janjetovic but the keeper has his angles right and Cirio’s shot comes back off the post and into the keeper’s arms.

38’ JANJETOVIC SAVE –Carrusca gets free down the left hand side of the pitch but shoots straight at the keeper who pushes the ball clear.

51’ NAUMOFF CHANCE – Naumoff jinks through the middle of the Reds defence and plays a one-two with Smeltz but just can’t stretch enough to get the final touch on the ball to slide it past Galekovic and it’s cleared.

82’ DUGANDZIC CHANCE – Hoole makes an error and Carrusca pounces to chip the ball to Dugandzic at the far post but the striker hits it first time and wide.

97’ NINKOVIC CHANCE – The Serbian receives the ball on the edge of the box and with two deft touches beats two defenders but drags his shot wide of Galekovic’s right hand post.

99’ JANJETOVIC SAVE – Elrich plays a one-two with Cirio to get beyond the back four but he hits his shot at Janjetovic who stands firm.

116’ MCGOWAN SENT OFF – Ryall is released clear on goal in search of an equaliser and is pulled down by McGowan who is sent off for a professional foul as Ryall was in a goal-scoring position.

Sydney FC Head Coach Graham Arnold made just two changes to the team that defeated Belconnen United 3-0 seven days earlier with winger Robert Stambolziev coming into the team to replace youngster Max Burgess who dropped to the bench, while Vedran Janjetovic returned between the sticks in place of Anthony Bouzanis.  Serbian World Cup player Milos Ninkovic made his first appearance on the bench for the Sky Blues while Mickael Tavares also returned as a substitute for the first time this season alongside striker Matt Simon.

Sydney FC Memberships are now on sale for the Hyundai A-League season 2015/16.   Click HERE to become part of the Sky Blues family