The Sky Blues dominated first half proceedings and created numerous chances despite going in at the break 1-0 down.

With an eye on the cup game, Arnold made 10 changes to the outfield line up with Charles Lokolingoy making an immediate impact scoring to equalise within seconds of the restart.

The strong Jets side struck the winner late in the game against the Sky Blues youngsters with Arnold pleased to have a fresh and fit squad to choose from this Wednesday night.

Graham Arnold: “The purpose was for everyone to get 45 minutes in a training match with a view to Melbourne City on Wednesday night in the FFA Cup.

“There was some fantastic play on a terrible pitch which made it very difficult to play on for both teams also with a lot of long balls.

“In the first half we created six or seven fantastic chances, hit the post, had two cleared off the line and were all over them.

“In the second half we experimented with a lot of young kids so it was a good hit out and we are all fresh and fit for Wednesday night.”

12’ PETRATOS GOAL – Petratos is released by Nabbout and finishes low, right footed into the corner.

46′ LOKOLINGOY GOAL – Matt Simon gets clear on the right and crosses to find Charlie Lokolingoy who has raced in front of the Jets defence to beat the keeper from close range.

71′ SHABOW GOAL – A Sydney FC clearance rebounds to give Shabow a shooting opportunity which Redmayne partially saves but Ryall can’t stop the ball trickling over the line. 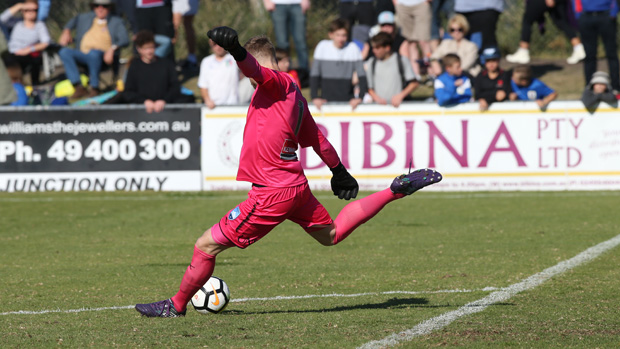 4′ OFF THE POST! – Brosque hits the post with a left foot shot inside the box then Adrian’s follow up is cleared off the line by Topor Stanley.

5′ GOAL DISALLOWED – Nabbout hits the bar with a shot from outside the box, then O’Donovan fouls Wilko on the goal line as Petratos slots home.

33′ BOBÔ CHANCE – Brilliant play Mierzejewski releases Bobô but Duncan is off his line quickly and down to block the shot.

43′ WILKINSON CHANCE CLEARED OFF THE LINE – Wilkinson header cleared off the line by Georgievski from a corner.

45′ GREAT SAVE REDMAYNE – Petratos curls a free kick on the edge of the box towards the top corner and Redmayne pulls off a fantastic full length save.

56′ GREAT SAVE REDMAYNE – Nabbout comes inside from the right and curls the ball towards top corner but Redmayne dives to his left to push clear.

Head Coach Graham Arnold played two teams against the Newcastle Jets in preparation for Wednesday night’s FFA Cup tie against Melbourne City at Leichhardt Oval.  Giving 45 minutes to each side all players got extra minutes in their legs ahead of the knockout tie.

Subs Not Used: None.

GET YOUR MEMBERSHIP HERE NOW