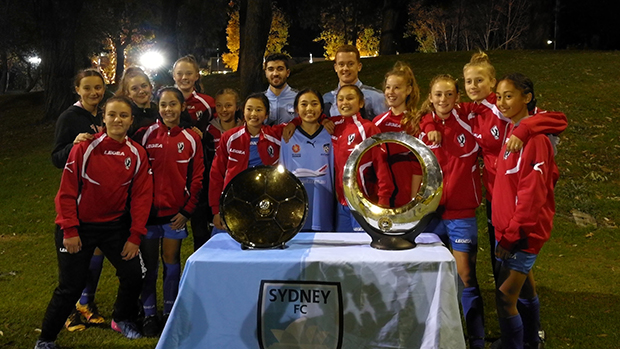 Visit this page for all the latest in Sydney FC Community News:

When he’s not busy scoring penalties in the Grand Final or dictating play in midfield for the Sky Blues, Sydney FC star Brandon O’Neill is busy running his online business.

Sydney FC’s Community Department recently played host to 17 players from Saitama City, Japan while they were on a six day Football tour in July.

The Early Bird Gets The Player Visit

It pays to register early for our Holiday Clinics, as our July promotion winner Kristabelle Oo found out.

Sky Blues Coach A Part Of The Family

Sydney FC endorsed Coach Pat Palumbo says he loves being a part of the Sydney FC family as he continues his coaching at the Sky Blues Holiday Clinics this Autumn.

Sky Blues Team Up With JMF

Sydney FC and partner school Endeavour Sports High have teamed up with John Moriarty Football in a new initiative that will see talented young JMF players aged 12-15, relocate to Sydney from remote NT, to pursue their education and football.

Sydney FC welcomed 10 of their Teacher Ambassadors to Allianz Stadium for Round 25 as the Sky Blues recognised members of their first group to undertake the program.

For the tenth year running, Football United once again proved the uniting spirit and capabilities of our game of Football as they celebrated, harmony, diversity and female football week with Sydney FC at Round 23.

Sydney FC was proud to continue to wave the rainbow flag at our Round 22 #BigBlue at Allianz Stadium to help promote inclusion and diversity in sport ahead of what was a big weekend of Mardi Gras celebrations in Sydney.

The club’s first regional partnership is going from strength to strength with lots of activity over the festive season, and new clinics planned in the region for April.

Carnival of the Codes Action

The Cooks River Sporting Alliance’s “Carnival of the Codes” got underway this week! With multiple sports in attendance across this week and next, Sydney FC is on hand to deliver an introduction to football for many football first-timers!

Qualifying the game’s next coaching Talent

Sydney FC players were proud to be in attendance at the Sydney Children’s Hospital, Randwick on Wednesday, for a Christmas team visit.

Overwhelming Support for W-League in Sutherland

Sydney FC returned to the Sutherland Shire for the first W-League match  in 5 years to a bumper local crowd, putting plenty of smiles on the faces of local female players.

Sydney FC and Cranbrook School have forged a strong partnership that is to be enhanced further in 2017 with the introduction of first of it’s type co-curricular football program.

2016/17 Junior Blue Buddies enjoyed the first ever JBB training session last Saturday at the Sky Blues training base, with all kids enjoying devoted time with their favourite players.

Sydney FC have unveiled their first Teacher Ambassadors program to be launched for the new school year in 2017 aiming to promote football within schools.

Community Partner Football United are in the midst of their 10th year in providing social and educational chances to diverse youth through football. Celebrations kicked off Sunday at Allianz Stadium.

Sydney FC community clinics have two new graduates with Community Football Manager Paul Reid spotting two young stars at recent clinics who have earned a call up to the Sky Blues’ U13 Academy squad for 2017.

Juniors Mix it with their Idols

Each home game juniors from local Sydney clubs enjoy unique experiences on pitch and with their favourite players and support their team from a whole new perspective.

beyondblue Cup Back At Home

Sydney FC are proud to be the recipients of the beyondblue cup again following a round of education and campaigning in Round 5 for community partner beyondblue.

Sydney FC’s Holiday Clinics continued to excel in spring, with a mix of new and old venues hosting three football filled days during the term 3 break.

Sky Blues Dress up for a Cause

It was another successful winter season for the football associations of Sydney, and Sydney FC were out in force to celebrate the close of the season with each association last month.

A Year of Schools Success

Sydney FC’s Sporting Schools Program has gone from strength to strength as each school term passes by in 2016.