Sydney FC have delivered a clinical, comprehensive performance at Seymour Shaw Park on Sunday, cruising to a 5-1 victory courtesy of a Caitlin Foord hat-trick and strikes to Teresa Polias and Princess Ibini. 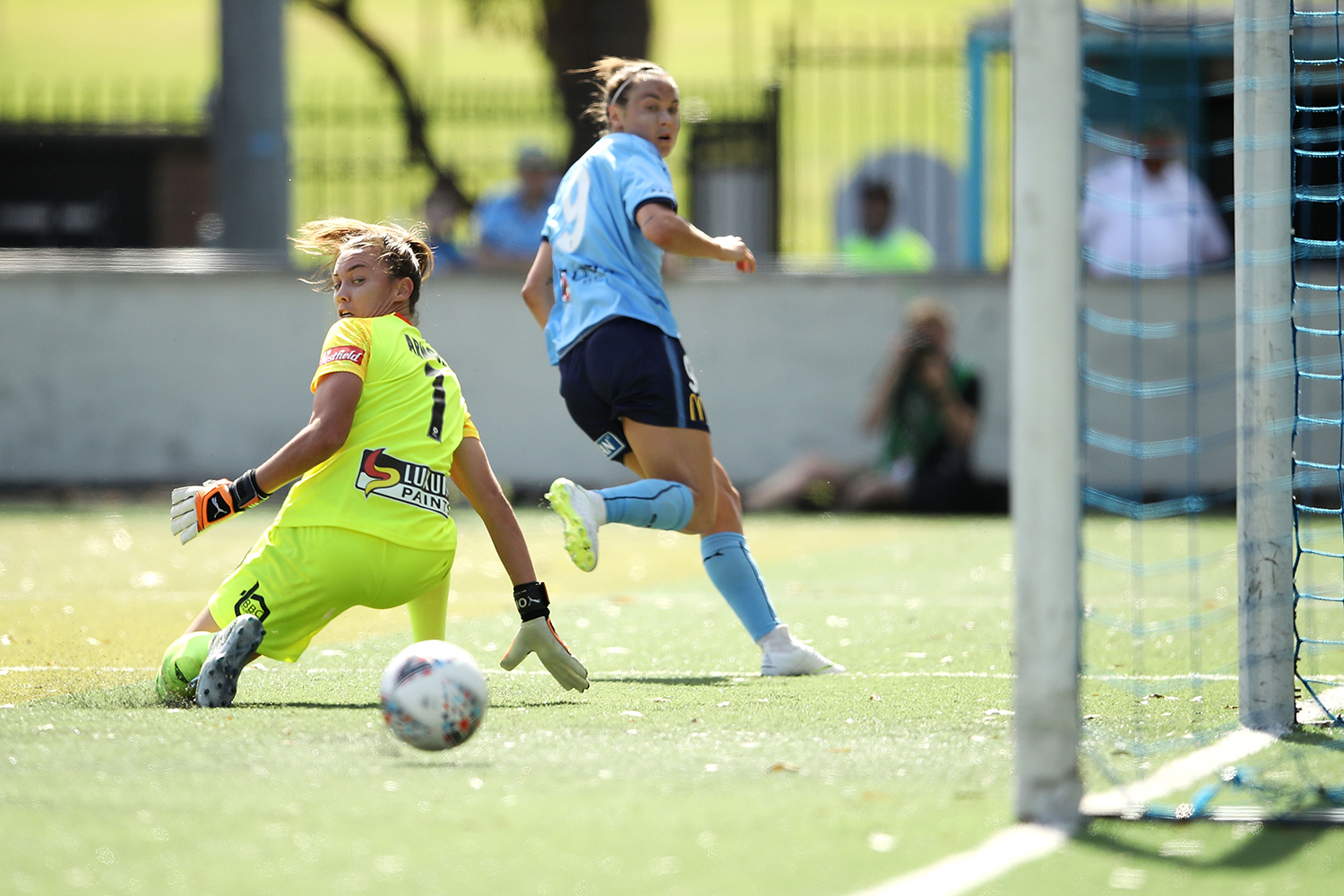 6’ Foord hits the bar – Brining down a ball in the box, Caitlin Foord is tackled while shooting before she follows up her initial effort by rattling the bar with a powerful drive.

12’ McCaskill header cleared off the line – A Sky Blue corner is whipped to the far post where it’s headed on to Savannah McCaskill who flicks a header at goal only to see it hooked away off the line.

15’ Foord goal – Great build up outside the Brisbane Roar box ends with Savannah McCaskill sliding in a perfectly weighted ball for Catilin Foord to run onto and covert low on the angle.

21’ Bledsoe tips over the bar – A sharp break forward from Brisbane Roar sees Hollie Palmer drive a shot at goal from the edge of the box, forcing Aubrey Bledsoe to tip it over.

25’ Nagasato goal – The away side restore parity as Yuki Nagasato is played into the Sky Blues’ box, taking a touch and rounding the keeper before converting low into an empty net.

59’ Polias goal – Substitute Princess Ibini takes on her marker on the right flank before cutting back into the path of Teresa Polias who rifles a powerful effort into the back of the net from the edge of the area.

64’ Ubogagu hits the post – Brisbane Roar counter quickly and Chioma Ubogagu is released on the left, charging into the Sydney FC box before blasting her effort against the post under pressure.

67’ Foord doubles her tally – Caitlin Foord bags her second goal of the day as she races onto a hooked ball forward from Danielle Colaprico to charge into the Roar box and slide the ball home.

70’ Ibini goal – Princess Ibini extends the Sky Blues’ lead as she flicks the ball in at the near post following great work from Sofia Huerta on the right flank who stood up her marker before driving into the box and squaring low.

83’ Foord nabs her hat-trick – Caitlin Foord bags her hat-trick as she plays a neat one-two with Taylor Ray inside the Brisbane Roar box before sweeping the ball beyond goalkeeper Mackenzie Arnold from close range. 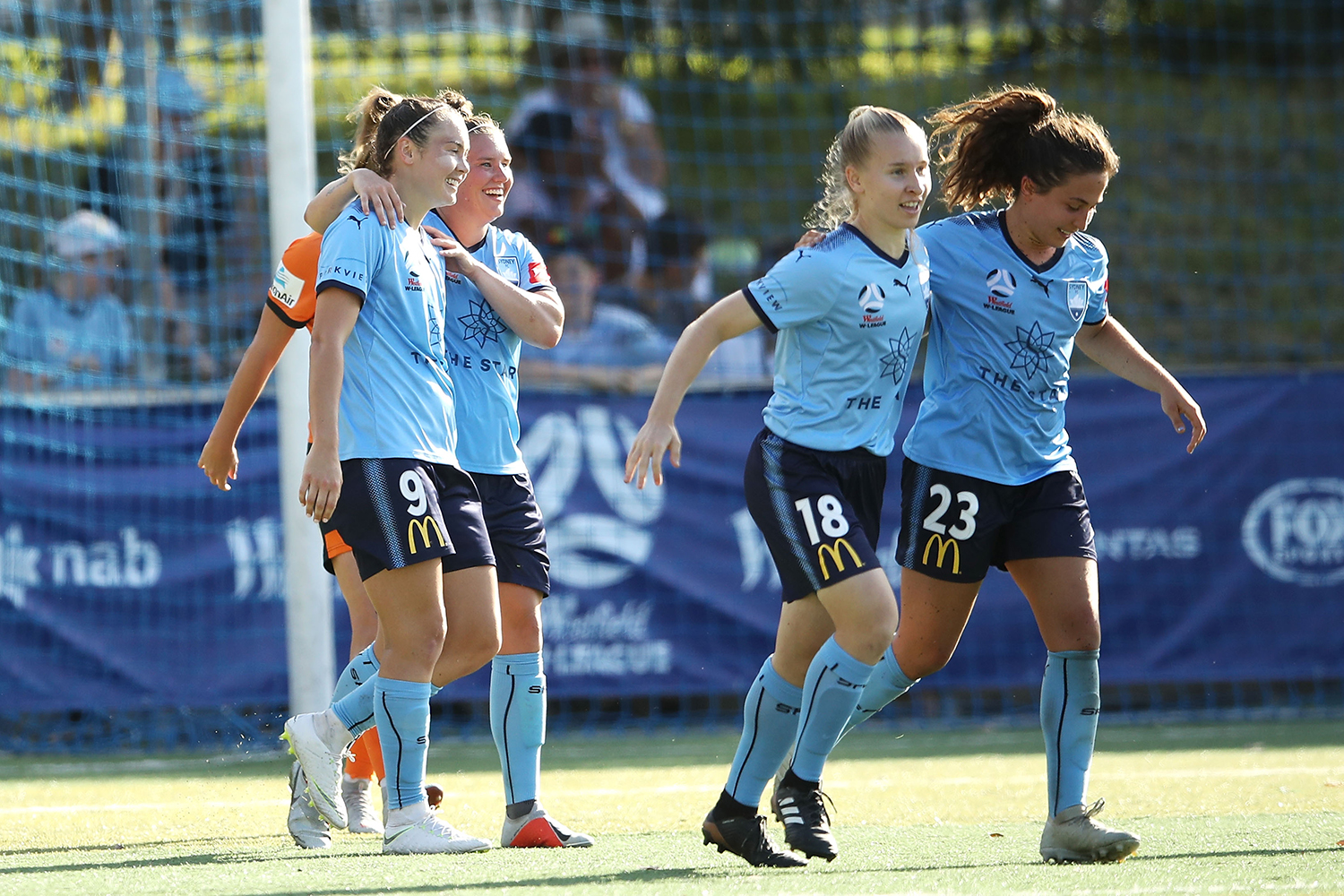 The match opened at a quick tempo in end to end fashion, with chances at both ends as Caitlin Foord rattled the crossbar before Aubrey Bledsoe was called in to action to save a low Yuki Nagasato shot at the other end.

Fashioning the better of the early chances it was the Sky Blues who took the lead a quarter of an hour in, as Caitlin Foord was slipped in by Savannah McCaskill to convert low from a tight angle across goal.

A wave of chances followed for the hosts as McCaskill and Lisa De Vanna both excited the crowd with efforts, before the away side restored parity as Nagasato was played in, rounding the keeper and converting into an empty net.

The Sky Blues continued their onslaught on the Brisbane goal following the leveller, however they entered the break all square in stifling conditions at Miranda.

Sydney FC kicked off the second half on the front foot and re-took the lead inside 15 minutes after the restart, as Teresa Polias scored her second ever Westfield W-League goal with a sublime strike from the edge of the area, blasting the ball into the net following a great cut back from Princess Ibini.

Brisbane Roar troubled after Polias’ goal with Chioma Ubogagu hitting the post following a sharp counter attack before the floodgates opened for the Sky Blues.

Caitlin Foord was first to increase the Sky Blues lead as she raced onto a hooked ball from Danielle Colaprico to slide the ball home before Princess Ibini, a second half substitute, made it four for the hosts, sweeping in at the near post following some fine work from Sofia Huerta on the right.

A series of substitutions disrupted the flow of play as the half wound down, however Caitlin Foord still found time to bag a hat-trick for Sydney FC as she played a neat one-two with Taylor Ray inside Roar’s penalty area before sidefooting into the back of the net to complete the rout.

Sydney FC next face Adelaide United at Cromer Park on Thursday 13December (kick off 7:30pm AEDT). Get down to Manly to back your Sky Blues or catch the match LIVE on Fox Sports. 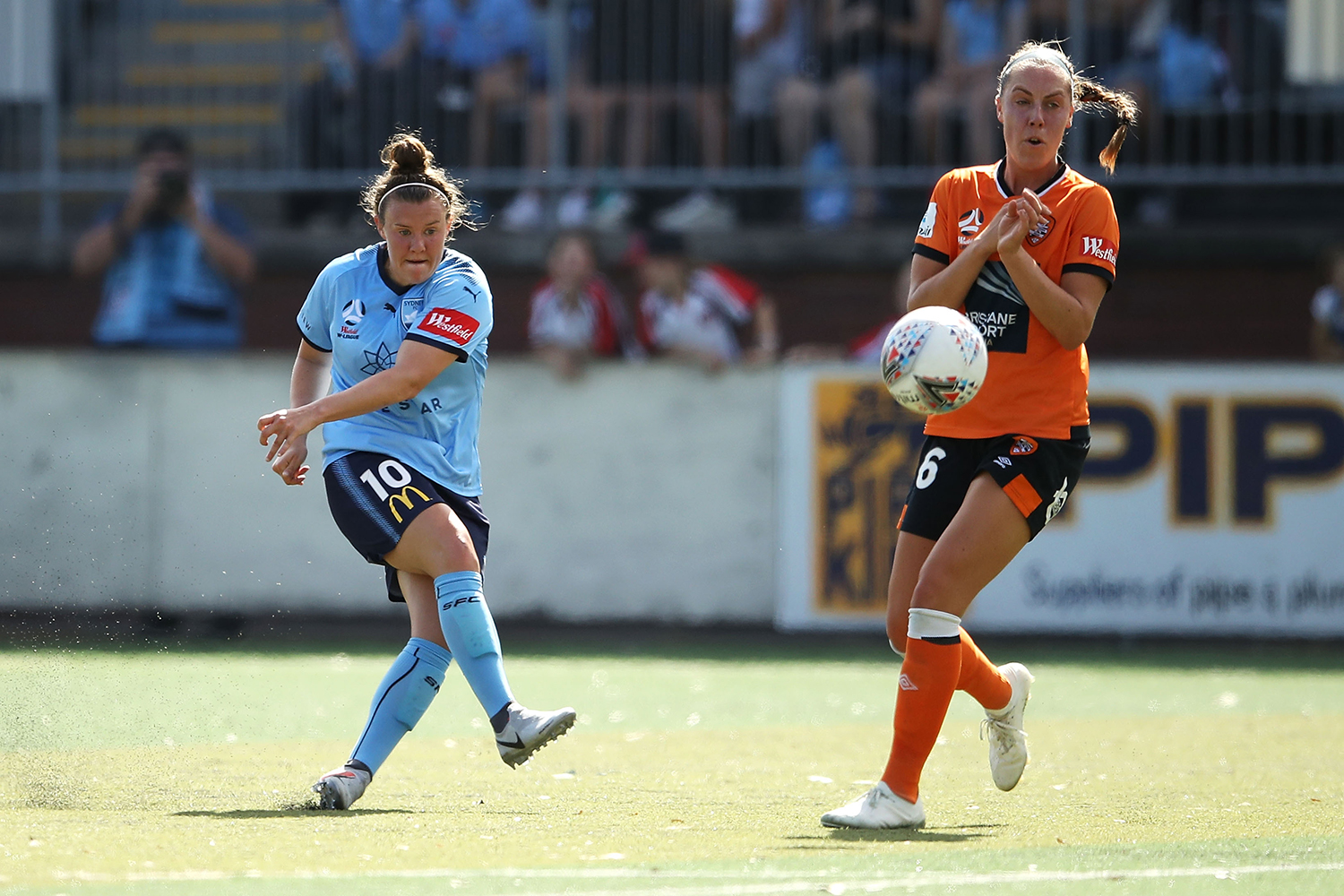 Ante Juric: “We worked on crosses, the final touches and finishing and sharpening our skills in the front third. We had so many chances.

“Liz was great, first game back and to play the way she did first time back was outstanding, but we still need to work on the defence, Aubrey saved us a few times.

“Savannah in the middle was creative for us and Caitlin Foord running off her worked very well. We’ll see what we do next week.”

Caitlin Foord: “Whenever you’re putting balls in the back of the net it feels like you’ve done your job but I’m just happy to get the win.

“We put five in the back of the net, that’s the main thing and it’s good confidence moving forward.”