Carney Not Fazed By Artificial Surface

It will be a welcome transition from natural grass for Carney, and the former Socceroo believes the surface quality that artificial turf provides will suit the Sky Blues style of play against Blacktown City FC.

Head Coach Graham Arnold confirmed Bobô is in line to make his first competitive start, and Carney said the surface will further aid in the Brazilian striker’s goal scoring ability.

“We can’t wait to play on this pitch,” he said.

“The one we played on against Perth was 10 times worse than this so we’re really looking forward to playing on this.

“With the crisp passing you can do on this pitch it will suit our game so all the boys are really looking forward to tomorrow night.

“Bobô has been great,” he continued.

“He’s a clinical goal scorer, he likes the ball at his feet, and he’s got a good football brain.

“He’ll suit this surface as well so I’m looking forward to tomorrow and hopefully I can put one on for him.” 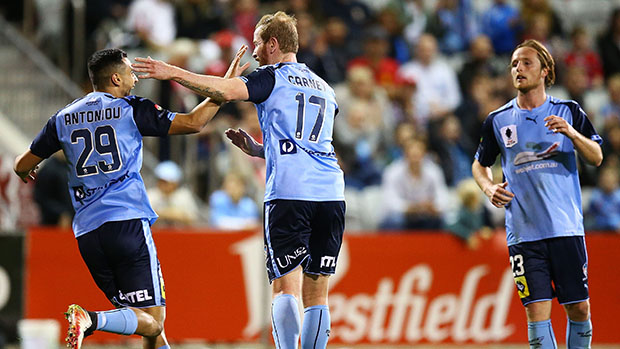 Carney said he’s expecting a tough reception from Blacktown, but the Sky Blues number 17 believes Sydney FC’s quality across the park will come out on top in tomorrow night’s cup clash.

“We’re coming off a good win in Perth so if we can carry on that form tomorrow we shouldn’t have a problem.

“It will be a big game for them [Blacktown City] and we know they’re going to be fully up for it, but with the quality that we’ve got and level we can play we should be able to overcome it.

“We’ve got a fantastic team and a lot of depth and if you want to win things you’ve got to have that.

It’s a great atmosphere in camp and hopefully we can get through tomorrow. It should be a great night for both teams.”