Proudly brought to you by:

Hello everyone, once again I hope you are remaining safe and your lives are gradually improving with some lifting of social distancing guidelines.  Let’s hope it continues and the sooner we can get back to work and normal lives the better.

With everything that is happening, I only realised today is the third anniversary of our 2017 Grand Final win over Melbourne Victory.

So I thought I’d take you back through my experiences of the day….

A lot of people talk about nerves, but I actually felt more nervous the week before against Perth Glory in the semi-final.   We won the league by so many points and were so dominant in terms of wins and our league position, that we didn’t want to fall over at the first hurdle.

Once we got to the Grand Final, knowing we had the advantage of a home match at a stadium where we had been so dominant meant we had a lot of confidence in the group.  We also had a good record against our opponents Victory that season.

I just had a normal day prior to the game. I spent it at home where I had breakfast and lunch. We left home at 2pm and headed to meet the boys at 3pm at the hotel at Hyde Park, where we jumped on the bus for the short ride into Allianz Stadium.

We saw all of the pubs were full of Sky Blue shirts down Oxford Street and across the road from Allianz Stadium the pub was heaving.  After we turned into the Paddington Lane entrance of the ground we didn’t see a soul because it was straight into the changing room.

We weren’t at our best in the first half.  The pitch turned it into a bit of a battle and we weren’t playing the football that we had played all year.  Victory scored 20 minutes into the game and I thought it was good for us to get into the sheds at half time and regroup. We were definitely still in the contest. 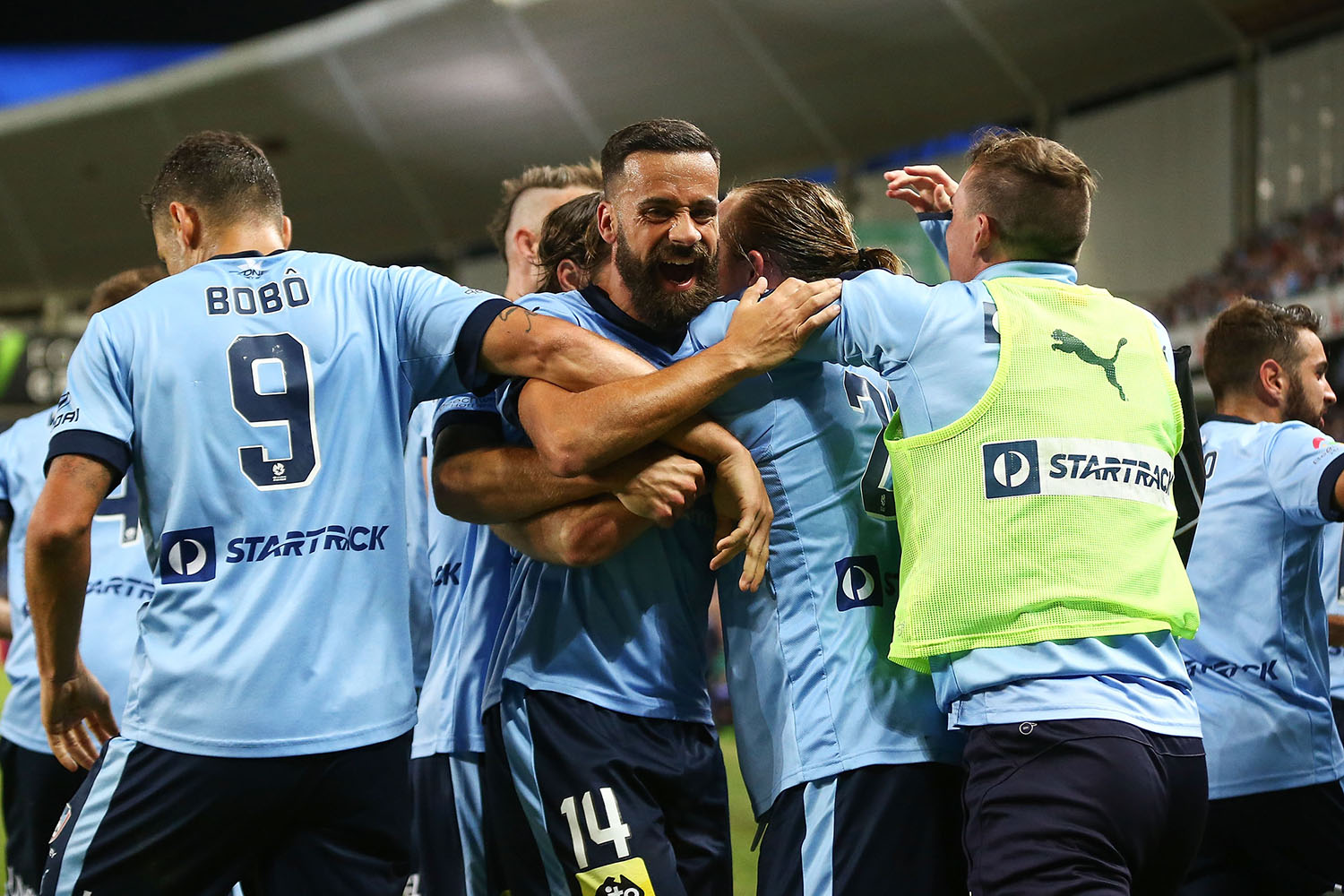 One minute into the second half I could tell we were playing differently and it was going to be a different contest.  We were pressing and going forward more, pinning them in their half.  It was only a matter of time before we put one away.

I was in the box for the equalising goal and I remember Jordy [Buijs] chested it down.  I was asking for the ball behind him but he gave it to Carns [David Carney] who shot and then Busta [Rhyan Grant] scored the rebound.  I remember the crowd going absolutely crazy and I couldn’t hear a thing. It was one of the biggest and best noises I’ve heard – it was absolutely unbelievable.

We had been down against Victory twice before that season and came back to win, so after we got that goal I remember thinking we’d get another.  We didn’t however, and Victory held on to take it to penalties.

I’d taken penalties in a Grand Final and Semi Final before and I wanted to step up and take one. However it didn’t go the way I wanted and I pushed it wide.  We were always confident the way Vuka [Danny Vukovic – goalkeeper] had played that year that he would pull out at least one save, which he did.  It wasn’t a nice feeling to miss but we were all still confident.

Valeri missed his penalty which got us on level terms and then when Vuka saved Rojas’ effort I vividly remember him trying not to get too excited and containing his emotions which was out of character for him.  He always wears his heart on his sleeve and he kept his emotions in check, until Ninko scored of course.

I remember saying to Alex Brosque; “If Milos scores do we win it?”.  As he was stepping up, I knew after the year he had had, having won Player of the Year, that it was meant to be and he’d win us the Championship with the last kick of the season.

My celebration was more relief than anything.  It was relief that I’d won a Grand Final as I’d lost three before but also that we finished the season off in the right way.

We put the cherry on top and it was the way we deserved to finish.

We celebrated long into the night with family, staff and team-mates at the Ivy, as we’d all played a part in the success. It was very special.

It is still one of my best memories in football and to win it the way we won it, in front of a packed house was amazing.

Hopefully we can win it again this year.