Amidst all the hype surrounding the #SydneyDerby, for Sydney FC defender Alex Wilkinson Saturday night’s clash is just business as usual.

The Sky Blues centre half said he wasn’t paying the Wanderers any special attention ahead of the clash, as he said preparations were the same as every other match this season that’s seen the Sky Blues notch 19 straight games undefeated.

GALLERY: How Well Do You Know The #SydneyDerby

“I don’t think we pay any extra attention [to the Wanderers],” Wilkinson said.

“It’s great that it’s a derby and a fantastic occasion not only for the players but for the fans and the A-League in general, but for us it’s another team in our way and another team we have to get three points off.

“There’s no extra preparation for us, it’s just business as usual. We prepare the same every week for every opponent.

“I think every team that we play against now is looking to knock us off and be the first team to beat us, but that’s natural and that’s what happens when you’re doing well and I’m sure it’ll be no different this weekend.

“We’ve  put ourselves in a position now where we can create history and push on to be the best team the A-League has ever seen,” he continued. 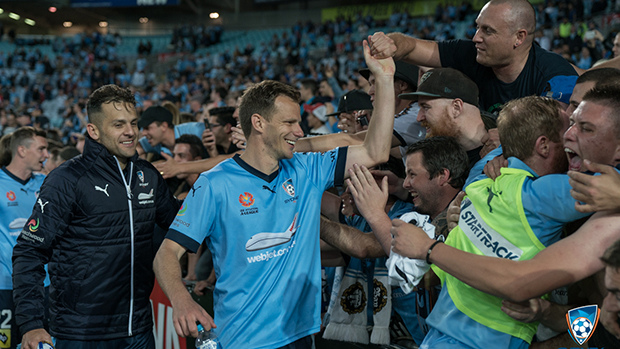 Wilkinson said that while the fact the Wanderers are three years without a win in the derby was confidence boosting, it wouldn’t affect the running of the match.

The central defender said the squad would be looking to build on their form from the previous derby that ended nil all at Allianz Stadium, and use it as extra motivation for Saturday night’s encounter at ANZ Stadium.

“It gives you confidence for sure [that they haven’t beaten us in three years] but it’s the past as well,” he said.

“We don’t want to dwell on the three years since they beat us because Saturday is a new game. We’ve got to prepare accordingly and turn up on the night and perform like we have been.

“Of course it gives you a bit of confidence knowing that we’ve done well in the past but it’s a new game and a new situation.

“We’ll be looking to obviously improve on the way we played in that last derby and I think since that game we’ve had some pretty good performances,” he continued.

“It’s great to see how well we’re doing when we know there’s so much left in us.”