Burns Brace Steals It For Phoenix

The Socceroos striker hit a brace in the final 20 minutes of the game to deny Sydney FC the points after the home side had dominated large parts of the game and a created a number of good chances.

Shane Smeltz had claims for a penalty turned down late on and the Sky Blues now face Adelaide United on Boxing Day at Allianz Stadium in a crunch game. 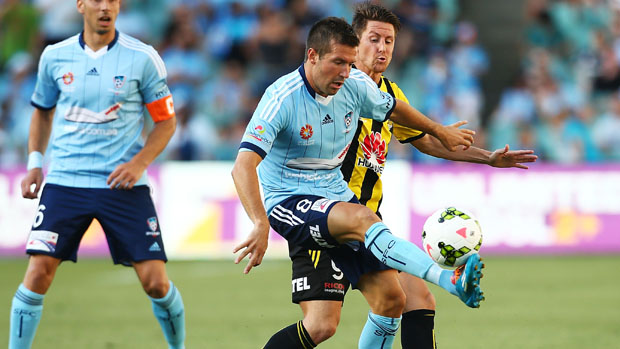 Graham Arnold: “Up until they scored I don’t think they had a shot on goal and we should have gone in 2-0 up at half time.  That’s football, if you don’t take your chances and you don’t score when you are dominating the play then all it takes is one bit of sloppiness and you can be down 1-0 and that’s what happened.

“The boys are putting in everything they can but it’s a hiccup definitely and I’m a fighter and I’ll be working harder than ever and the boys have to work harder and fight harder too.

“That dressing room has been through some tough times over the last four or five weeks when they’ve seen their mates cop bad injuries and that can take its toll but we have to be stronger than that.

“I thought that for 65 minutes our players put a lot of pressure on the ball and we were physical and we didn’t give them time to play and we stopped them from getting in between the lines and finding space and after their first goal which came from a long ball it knocked the stuffing out of us.”

73’ BURNS GOAL – Burns drives forward into the box and beats two Sydney FC defenders before striking the ball with his left foot beyond Janjetovic.

80’ BURNS GOAL – Burns receives the ball inside the Sydney FC box, he creates space and hits a shot on the turn into the far corner of the net.

24’ SMELTZ CHANCE – Bernie Ibini makes a fine run down the right hand side getting to the byline and pulls the ball back for Shane Smeltz on the edge of the box, but he puts his first time shot a few inches past the keeper’s left hand post.

28’ JANKO HITS POST – Ibini and Janko combine to get Ibini to the byline. The Socceroo crosses to Smeltz who’s flicked shot is saved by the chest of Moss and Janko follows up with a shot inside the six yard box which smashes off the post and clear of danger.

31’ JANKO SHOT SAVED – Grant does well find Janko on the edge of the box and the Austrian striker shows quick feet to turn and flick a left foot shot towards goal which Moss plucks from the air.

47’ ANTONIS SHOT BLOCKED – Janko flicks the ball over his head from the left edge of the box, it bounces into the path of Grant who plays it back to Antonis who strikes it from 12 yards out but Durante gets his backside in the way to block.

88’ SMELTZ PENALTY APPEAL – An excellent ball from Calver finds Smeltz just beyond Sigmund.  The striker takes a touch but has his arm tugged while shooting by the defender and goes down but the referee gives nothing as Moss blocks the shot.

Sydney FC Head Coach Graham Arnold made one change to the starting line-up from the previous week’s 3-3 draw against Melbourne Victory.  Alex Brosque was rested with groin soreness with Rhyan Grant coming into the starting line up.  Hagi Gligor and Christopher Naumoff were brought onto the bench.